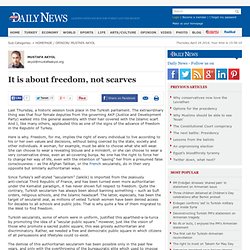 Akyol. With the latest controversy he created in Turkey, Prime Minister Tayyip Erdoğan took the debate on his much-discussed authoritarianism to a whole new level. By announcing his government will not allow student houses where “boys and girls mingle,” he unveiled his willingness to intrude in individuals’ private lives to impose his “moral conservatism.” Needless to say, such “morality policing” is unacceptable in any free society.

Needless to say, this is in fact an attack on the “personal freedoms” that Erdoğan’s party has been praising for a decade, especially when it came to the right to wear the Islamic headscarf. Akyol: Arab spring? Alevis. Thousands of Alevis, who follow a liberal sect of Islam, voice demands for rights and recognition at a massive rally in Istanbul’s Kadıköy Kadıköy Square on Istanbul’s Anatolian side fills with Alevis voicing demands for rights for their community. AA Photo Thousands of Alevis gathered in a massive rally in Istanbul’s Kadıköy district on Nov. 3, demanding equal citizenship rights and freedom of faith, while also raising their voice against projects aiming to “assimilate Alevis.”

Demonstrators chanted slogans such as “We won’t be the state’s Alevis,” and “We will never bend the knee to injustice,” as well as slogans referring to the anti-government Gezi Park protests that were sparked in May. Around 50 Alevi associations and political parties were represented in the rally. Legal status demanded. Democracy Package. At long last, the democracy package has arrived, the nation breathlessly examining it in its crib and arguing about whether it resembles the AKP or whether, as the prime minister claims, it was engendered by “international human rights, the European Union acquis and the works of the Wise People” (a group of public figures nominated to advise the peace process between AKP and the PKK). 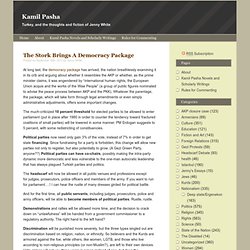 Whatever the parentage, the package, which will take form through legal amendments or even simply administrative adjustments, offers some important changes. The much-criticized 10 percent threshold for elected parties to be allowed to enter parliament (put in place after 1980 in order to counter the tendency toward fractured coalitions of small parties) will be lowered in some manner. Femmes. Forums. The Gezi Park protests have led to the emergence of local grassroots committees or "Open Forums" in many Turkish towns and cities. 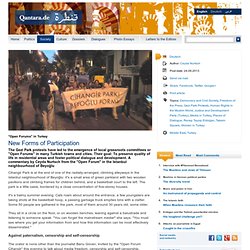 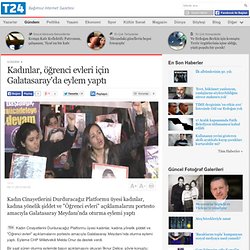 Kamil Pasha» Daring to Hope. KP_Headscarves_Parliament. KP_voile uni. Chief Prosecutor of the Supreme Court of Appeals, Abdurrahman Yalçınkaya, citing the Turkish constitution and the European Court of Human Rights, announced that the recent actions of the Higher Education Board (YÖK) to allow headscarves on campus contradicted both national and international law. 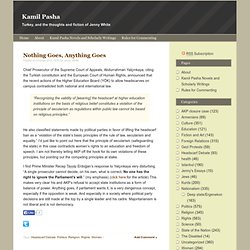 Mixité. NY Times. Adem Altan/Agence France-Presse — Getty Images Nurcan Dalbudak, center, was greeted by her fellow lawmakers on Thursday, when a ban on wearing Islamic head scarves in the Parliament was lifted. 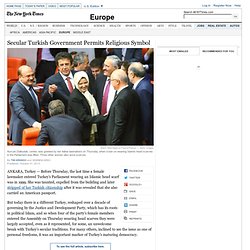 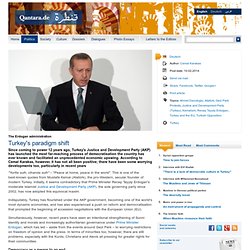 This is one of the best-known quotes from Mustafa Kemal (Atatürk), the pro-Western, secular founder of modern Turkey. Initially, it seems contradictory that Prime Minister Recep Tayyip Erdogan's moderate Islamist Justice and Development Party (AKP), the sole governing party since 2002, has now adopted this equivocal maxim. Indisputably, Turkey has flourished under the AKP government, becoming one of the world's most dynamic economies, and has also experienced a push on reform and democratisation that prompted the beginning of accession negotiations with the European Union (EU). Simultaneously, however, recent years have seen an intentional strengthening of Sunni identity and morals and increasingly authoritarian governance under Prime Minister Erdogan, which has led – aside from the events around Gezi Park – to worrying restrictions on freedom of opinion and the press.

Democracy as a means to an end. Turkish spring. We had not meant to find ourselves in the midst of the Istanbul demonstrations, or thinking about tear gas. 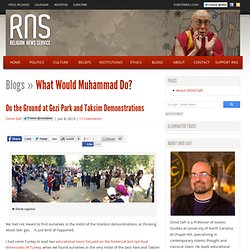 It just kind of happened. I had come Turkey to lead two educational tours focused on the historical and spiritual dimensions of Turkey, when we found ourselves in the very midst of the Gezi Park and Taksim Square demonstrations. So I did what every responsible tour leader would do: I told my group to stay far away from Taksim if they are not comfortable with demonstrations, tear gas, and police riot. I gave them lots of alternate activities to do. Then I headed straight for Taksim, taking three brave souls along for the ride. In the days leading up, we had noticed how many aspects of the demonstrations were not covered (or at least fully covered) on some Turkish TV channels.