Arthur Schopenhauer – Metaphysics of Love. We are accustomed to see poets principally occupied with describing the love of the sexes. 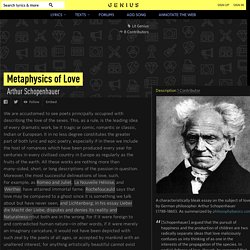 Groundbreaking documentary "Mind of Plants" proves hyper-intelligence of plant life. "What if plants have minds? 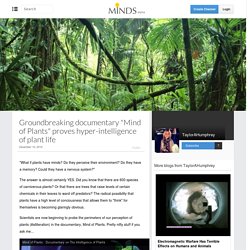 Do they perceive their environment? Do they have a memory? High School Humanities and Social Sciences. Indra's Net: Defending Hinduism's eBook: Rajiv Malhotra: Amazon.co.uk: Books. I was inititially attracted to this book because I recently began working on a Buddadharma text and need to bone up on Indra's Net because of its central role in Hua Yen Buddhism. 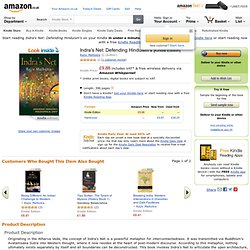 I wanted to get a nuanced Hindu perspective-- with Brahman, and not emptiness, as the noumenal foundation of the Net--and this book provided it, to a limited extent. However, because this book is essentially about "defending Hinduism's philosophical unity," it did not deeply consider the Vedic view of Indra's Net versus the Buddhist. What this book does deeply consider, however, is how modern and post-modern intellectual forces in the West are conspiring to de-legitimize Hinduism as a genuine and coherent religion. And according to Malhotra, the reason they do this is "to protect Western hegemony. " WhooshUp: "Later Heidegger" podcast by Sean Kelly. Nikolai Fyodorovich Fyodorov. Nikolai Fyodorovich Fyodorov (Russian: Никола́й Фёдорович Фёдоров; surname also Anglicized as "Fedorov") (June 9, 1829 – December 28, 1903) was a Russian Orthodox Christian philosopher, who was part of the Russian cosmism movement and a precursor of transhumanism. 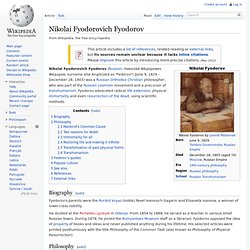 Fyodorov advocated radical life extension, physical immortality and even resurrection of the dead, using scientific methods. Biography[edit] Beyond the Anthropo(s)cene: Bracketing an Era. This week we focused on Integral Ecology with An Overview of Integral Ecology by Sean Esbjorn- Hargens and Michael Zimmerman. 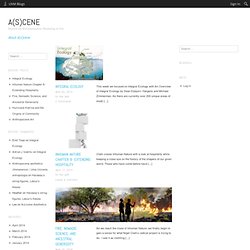 As there are currently over 200 unique areas of study […] Read Article → Clark closes Inhuman Nature with a look at hospitality while keeping a close eye on the history of the shapers of our given world. Those who have come before have […] Read Article → 166 Free Documentaries That Will Expand Your Consciousness. New Tab. Not for Profit: Why Democracy Needs the Humanities New in Paper The Public Square: Amazon.co.uk: Martha C. Nussbaum. Peter Sloterdijk. Peter Sloterdijk (German: [ˈsloːtɐˌdaɪk]; born June 26, 1947) is a German philosopher, cultural theorist, television host and columnist. 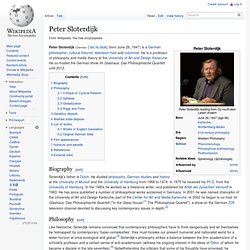 He is a professor of philosophy and media theory at the University of Art and Design Karlsruhe. He co-hosted the German show Im Glashaus: Das Philosophische Quartett until 2012. Biography[edit] Sloterdijk's father is Dutch. He studied philosophy, German studies and history at the University of Munich and the University of Hamburg from 1968 to 1974. Philosophy[edit] Critique of Cynical Reason[edit] The Kritik der zynischen Vernunft, published by Suhrkamp in 1983 (and in English as Critique of Cynical Reason, 1988), became the best-selling work on philosophy in the German language since the Second World War and launched Sloterdijk's career as an author.[5] Spheres[edit] The trilogy Spheres is the philosopher's magnum opus.

Globalization[edit] Sloterdijk also argues that the current concept of globalization lacks historical perspective. The John David Ebert Channel. Nonzero: The Logic of Human Destiny. Thesis[edit] The principal argument of Nonzero is to demonstrate that natural selection results in increasing complexity within the world and greater rewards for cooperation. 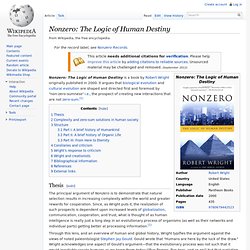 Since, as Wright puts it, the realization of such prospects is dependent upon increased levels of globalization, communication, cooperation, and trust, what is thought of as human intelligence is really just a long step in an evolutionary process of organisms (as well as their networks and individual parts) getting better at processing information.[1] Pierre Teilhard de Chardin. Sociology courses and lectures. David Lewis (philosopher) David Kellogg Lewis (September 28, 1941 – October 14, 2001) was an American philosopher. 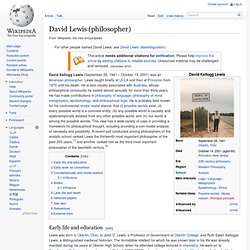 Lewis taught briefly at UCLA and then at Princeton from 1970 until his death. He is also closely associated with Australia, whose philosophical community he visited almost annually for more than thirty years. 22. Emergence and Complexity. Deacon, McGinn, and the problem of Cross-Disciplinary Communication Disorder. It would be easy to dismiss Colin McGinn’s review of Deacon’s Incomplete Nature as a bit of grumpy get-off-my-lawnism. 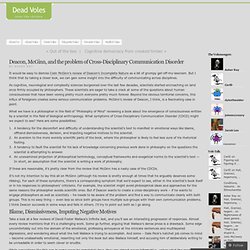 But I think that by taking a closer look, we can gain some insight into the difficulty of communicating across disciplines. As cognitive, neurological and complexity sciences burgeoned over the last few decades, scientists started encroaching on land once firmly occupied by philosophers. These scientists are eager to take a crack at some of the questions about human consciousness that have been vexing pretty much everyone pretty much forever. Beyond the obvious territorial concerns, this influx of foreigners creates some serious communication problems. The Phenomenon of Man. The Phenomenon of Man (Le Phénomène Humain, 1955) is a book written by French philosopher, paleontologist and Jesuit priest Pierre Teilhard de Chardin. 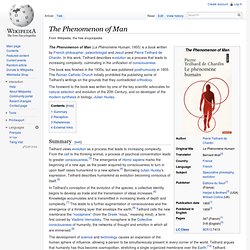 In this work, Teilhard describes evolution as a process that leads to increasing complexity, culminating in the unification of consciousness. The book was finished in the 1930s, but was published posthumously in 1955. The Roman Catholic Church initially prohibited the publishing some of Teilhard’s writings on the grounds that they contradicted orthodoxy. The foreword to the book was written by one of the key scientific advocates for natural selection and evolution of the 20th Century, and co-developer of the modern synthesis in biology, Julian Huxley.

Collected Works of Sri Aurobindo. The Collected Works of Sri Aurobindo (Sri Aurobindo Birth Centenary Library) were published by the Sri Aurobindo Ashram in 1972, on occasion of Sri Aurobindo's centenary. The compilation fills 30 volumes, or close to 16,000 pages. Contents[edit] In addition to his philosophical magnum opus, The Life Divine, Sri Aurobindo also wrote Savitri, a 24,000-line spiritual poem; The Synthesis of Yoga, an exposition of spiritual progress; books on ancient Indian spirituality (e.g. Essays on the Gita); various volumes on historical evolution of humanity (The Human Cycle, The Ideal of Human Unity); critiques on literature (e.g. The Denial of Death: Amazon.co.uk: Ernest Becker. Imagine: How Creativity Works. Imagine: How Creativity Works is the third non-fiction book by Jonah Lehrer, published in 2012. It explores brain science, and creativity and its social aspects.[1] By July 2012, the book had been recalled by its publisher due to factual inaccuracies.[2] Fabrication of Bob Dylan quotes[edit] In July 2012, Lehrer acknowledged that he fabricated some quotes attributed to Bob Dylan.[3] Sale of the electronic book as well as physical shipment of the book has been halted.[3] Fabrication of Teller quotes[edit] See also[edit] References[edit] External links[edit]

Steven Johnson (author) Steven Berlin Johnson (born June 6, 1968) is an American popular science author and media theorist. He is the author of the best-selling book, Everything Bad is Good for You: How Today's Popular Culture Is Actually Making Us Smarter (2005), which argues that over the last three decades popular culture artifacts such as television dramas and video games have become increasingly complex and have helped to foster higher-order thinking skills.

His recent book, Where Good Ideas Come From, advances the notion that innovative thinking is a slow and gradual process based on the concept of the "slow hunch" rather than an instant moment of inspiration. He expostulates on Stuart Kauffman's concept of the "adjacent possible" which enables the thinker to develop uncharted insights into unexplored areas. His book Future Perfect: The Case for Progress in a Networked Age was released in September 2012.[4] Steven Johnson is married and has three sons. Jason Silva - Filmmaker - Futurist - Epiphany Addict. Online Meditation Timer. Can non-Europeans think? - Opinion. In a lovely little panegyric for the distinguished European philosopher Slavoj Zizek, published recently on Al Jazeera, we read: There are many important and active philosophers today: Judith Butler in the United States, Simon Critchley in England, Victoria Camps in Spain, Jean-Luc Nancy in France, Chantal Mouffe in Belgium, Gianni Vattimo in Italy, Peter Sloterdijk in Germany and in Slovenia, Slavoj Zizek, not to mention others working in Brazil, Australia and China.

Our site also features collections of Online Certificate Programs and Online Degree & Mini-Degree Programs. Note: This page includes a lot of Massive Open Online Courses (MOOCs). Humanities & Social Sciences Art & Art History Courses. William C. Wimsatt. William C. The Best Textbooks on Every Subject. For years, my self-education was stupid and wasteful. Discover the Emerging Face(s) of Buddhism. Monoculture: How One Story is Changing Everything: Amazon.co.uk: F S Michaels. Lectures. The Structure of Scientific Revolutions. The Structure of Scientific Revolutions is a 1962 book about the history of science by Thomas S. 50 Renowned Academics Speaking About God. The Sociology of Philosophies: A Global Theory of Intellectual Change: Amazon.co.uk: Randall Collins. Does Philosophy Deserve a Place at the Supreme Court? (Thom Brooks) Volume 27 Rutgers Law Record. Proteus 2004.

How to Live Given the Certainty of Death.

Polysemy. Charles Fillmore and Beryl Atkins’ definition stipulates three elements: (i) the various senses of a polysemous word have a central origin, (ii) the links between these senses form a network, and (iii) understanding the ‘inner’ one contributes to understanding of the ‘outer’ one.[3] Polysemy is a pivotal concept within disciplines such as media studies and linguistics.