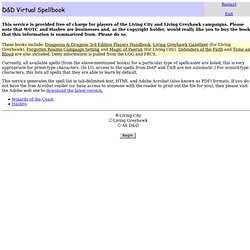 Please note that WOTC and Hasbro are businesses and, as the copyright holder, would really like you to buy the books that this information is summarized from. Please do so. These books include: Dungeons & Dragons 3rd Edition Players Handbook, Living Greyhawk Gazetteer (for Living Greyhawk), Forgotten Realms Campaign Setting and Magic of Faerun (for Living City). Defenders of the Faith and Tome and Blood are also included. Deity information is pulled from the LGG and FRCS. Currently, all available spells (from the above-mentioned books) for a particular type of spellcaster are listed; this is very appropriate for priest-type characters. This service generates the spell list in tab-delimited text, HTML and Adobe Acrobat (also known as PDF) formats. View topic - Cwslyclgh's Maps.

Pandaria.rpgworlds.info/cant/rules/cant_spells.htm. [3.x] Shax's Indispensible Haversack (Equipment Handbook) 3.5e Homebrew. 3.5 D&D Archives. The Wizards Community. Here is the example build I promised over on this thread: Incentive to Play a Kobold The Manipulate Form ability is explained here, operating under the Fair Use clause. 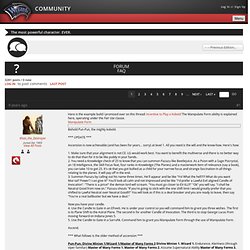 Manipulate Form At will, a sarrukh can modify the form of any Scaled One native to Toril, except for aquatic and undead creatures. With a successful touch attack, it can cause one alteration of its choice in the target creature's body. The target falls unconcious for 2d4 rounds due to the shock of changing form. A successful DC 22 Fortitude dave negates both the change and the unconciousness. Behold Pun-Pun, the mighty kobold. Eberron. USA: Showing ads in Dungeons and Dragons > Dungeons & Dragons 2nd Edition - RPG Game Find. S Dungeons and Dragons Database (D&D DnD) Erdea Manor. Erdea Manor is a four-level dungeoncrawl I’ve written and drawn up that is spanning multiple posts. Thus this page exists to guide the reader through the various posts to find the whole thing. As of December 8th, 2012, this page is complete, linking to all the posts that make up Erdea Manor.

To make it easier to read and use, issues 4 and 6 of Dyson’s Dodecahedron are dedicated entirely to the manor and between them contain all the maps, levels and keys from these articles. Erdea Manor is also one of the adventures in the first chapter of Dyson’s Delves. Dungeons and Dragons 2nd Edition Spells. RPG Locker, cheap miniatures & gaming accessories. Www.istari.org/gnba/spells/gnpb/priests.pdf. The Wizards Community. The Great Net Equipment List. Spell Tables (AD&D PHB, 1st Ed.) DRUIDS (Clerics) ILLUSIONISTS (Magic-Users) Each spell is presented here in exactly the same format. The spell is first identified by name and type of magic it involves. Thereafter its level, range (distance it can be cast), duration, area of effect, components, casting time, and saving throw are shown. Finally, an explanation of the spell and a description of its effects are given in some detail. Range is shown in inches (See DISTANCE) or as "touch", which indicates the caster must physically contact the recipient of the spell with his or her hand.

Duration is given as number of turns, rounds, or simply "instantaneous", as in the case of a Lightning Bolt which lasts only a brief moment. Area of Effect shows how large an area the spell covers, or how many persons or creatures it will affect, Components, as previously mentioned, are verbal (V), somatic (S), and/or material (M). Casting Time shows the number of melee rounds, or segments of a melee round, required to cast the spell. The Great Net Spellbook & Prayerbook. D&D Weekly Guides. Complete MacGyver. Pathfinder/3.5 Spell: Allelorn’s Intermittent Duration « Gaming Tonic. A few years back I came up with this spell to allow a wizard or sorcerer to turn off low-level spells and restart them at a later point. 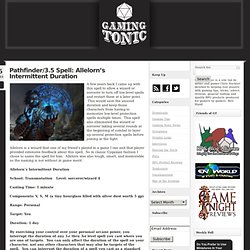 This would save the unused duration and keep those characters from having to memorize low-level protection spells multiple times. This spell also eliminated the wizard or sorcerer taking several rounds at the beginning of combat to layer up several protection spells before joining in the fight. Allelorn is a wizard that one of my friend's played in a game I ran and that player provided extensive feedback about this spell. So in classic Gygaxian fashion I chose to name the spell for him. Allelorn was also tough, smart, and memorable so the naming is not without in game merit. Allelorn’s Intermittent Duration School: Transmutation Level: sorcerer/wizard 4 Casting Time: 1 minute Components: V, S, M (a tiny hourglass filled with silver dust worth 5 gp) Range: Personal. 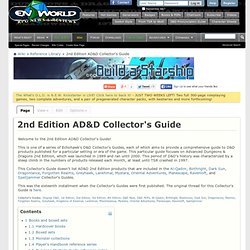 This is one of a series of Echohawk's D&D Collector's Guides, each of which aims to provide a comprehensive guide to D&D products published for a particular setting or era of the game. This particular guide focuses on Advanced Dungeons & Dragons 2nd Edition, which was launched in 1989 and ran until 2000.

This period of D&D's history was characterized by a steep climb in the numbers of products released each month, at least until TSR crashed in 1997. This Collector's Guide doesn't list AD&D 2nd Edition products that are included in the Al-Qadim, Birthright, Dark Sun, Dragonlance, Forgotten Realms, Greyhawk, Lankhmar, Mystara, Oriental Adventures, Planescape, Ravenloft, and Spelljammer Collector's Guides. This was the sixteenth installment when the Collector's Guides were first published. Contents topHardcover books topBoxed sets topMonster collections.