Taming of the Shrew. Unsung Heroes: Empress Theodora. Today’s hero had some really quite impressive career advancement over the course of her life. 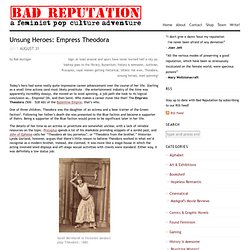 Starting as a small time actress (and most likely prostitute – the entertainment industry of the time was apparently incredibly sleazy), she moved on to wool spinning, a job path she took to its logical conclusion as… Empress? Oh, and then Saint. Who makes a career move like that? The Empress Theodora (500 – 528 AD) of the Byzantine Empire, that’s who. One of three children, Theodora was the daughter of an actress and a bear trainer of the Green faction. The details of her time as an actress or prostitute are somewhat unclear, with a lack of reliable resources on the topic. Sarah Bernhardt in Victorien Sardou's play 'Théodora', 1882. Around about 516 AD, Theodora leaves the theatre/brothel and travels to North Africa. Whether she was a wool spinner or not, it was around the time of her return to Constantinople that she became associated with the young Justinian, the adopted heir of Justin I. 6 Factors That Secretly Influence Who You Have Sex With. Statistics indicate that more and more frequently, "hookups" are turning into meaningful relationships. 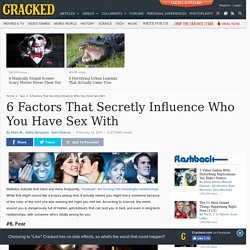 While that might sound like a snazzy pickup line, it actually means you might marry someone because of the color of the shirt she was wearing the night you met her. According to science, the world around you is dangerously full of hidden aphrodisiacs that can land you in bed, and even in long-term relationships, with someone who's totally wrong for you. #6. Fear The Romantic Notion: "If two people are meant for one another, it doesn't matter whether they meet in high school or prison -- love will find a way. " Science Says: "Did you see a comedy or a horror movie on your first date?

We tend to think that emotions such as fear and anger cause our hearts to speed up. 6 Harsh Truths That Will Make You a Better Person. 2017, motherfuckers. 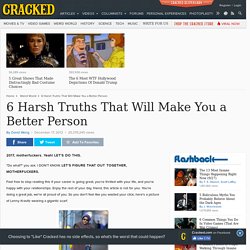 Yeah! LET'S DO THIS. "Do what? " you ask. I DON'T KNOW. Feel free to stop reading this if your career is going great, you're thrilled with your life, and you're happy with your relationships. Via Upscalehype.com For the rest of you, I want you to try something: Name five impressive things about yourself. Note: I originally posted this in December of 2012, and to date it has drawn more than 20 million page views and been shared on Facebook more than half a million times. . #6. Getty Let's say that the person you love the most has just been shot. Getty"OK, which one is the injured one? " You ask, "Are you a doctor? " The guy says, "No. " You say, "But you know what you're doing, right? At this point the guy becomes annoyed.

Confused, you say, "How does any of that fucking matter when my [wife/husband/best friend/parent] is lying here bleeding! Now the man becomes agitated -- why are you being shallow and selfish? Getty"I don't get it. Getty"Here's that shit you needed. . #5. . #4.