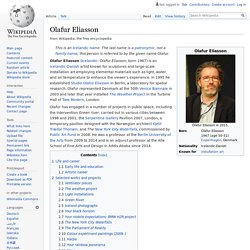 In 1995 he established Studio Olafur Eliasson in Berlin, a laboratory for spatial research. Olafur represented Denmark at the 50th Venice Biennale in 2003 and later that year installed The Weather Project in the Turbine Hall of Tate Modern, London. Olafur has engaged in a number of projects in public space, including the intervention Green river, carried out in various cities between 1998 and 2001; the Serpentine Gallery Pavilion 2007, London, a temporary pavilion designed with the Norwegian architect Kjetil Thorsen; and The New York City Waterfalls, commissioned by Public Art Fund in 2008.

Life and career[edit] Studio Olafur Eliasson. Olafur Eliasson: ‘I am not special’ Olafur Eliasson, the Icelandic-Danish artist who will probably always be best known for the vast sun he induced to rise inside the Turbine Hall at Tate Modern in 2003, works in Berlin in a building that once housed a brewery. 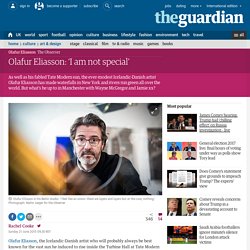 Artists haven’t been associated with garrets for a while now, but even by 21st-century standards this place is something else. While Eliasson calls it a “reality-producing machine”, a term born of his conviction that, far from being rarefied and utopian, the projects it turns out are deeply involved with the world in which they’re made, it seems more like a kind of factory to me, albeit one devoted to the manufacture of ideas rather than of things. Eighty people are employed in its cavernous spaces, working on everything from the archive to the production of catalogues, the staging of international exhibitions to the design of full-scale architectural projects. Little Sun. Olafur Eliasson and the power of the sun. Installation artist Olafur Eliasson was born in Copenhagen in 1967 to Icelandic parents. 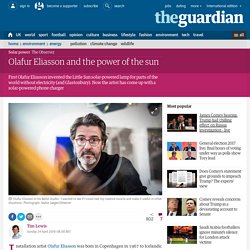 He is best known for creating a giant sun in Tate Modern’s Turbine Hall in 2003, viewed by more than 2 million people, and for making four dramatic waterfalls in New York harbour in 2008. In 2012, he launched Little Sun solar-powered lamps for areas of the globe with no electricity (though they have also proved popular at music festivals in the developed world). This month, he releases the Little Sun Charge, which uses solar energy to power mobile phones. How successful has the Little Sun lamp been? Right now, for every lamp we sell in on-grid areas of the world – where people have access to power, like the UK – we deliver two lamps at cost price in, for instance, rural Africa.