Population and the Environment 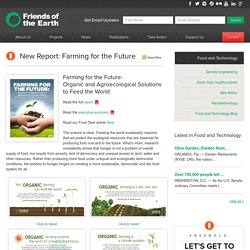 Sustainable Development Resources. Iraqi children pay high health cost of war-induced air pollution, study finds. Air pollution caused by war may be a major factor in the numbers of birth defects and cancers being reported in Iraq and other war zones, a study has suggested. 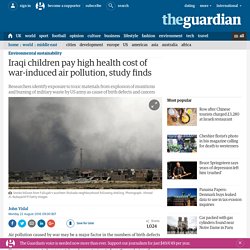 Human exposure to heavy metals and neurotoxicants from the explosion of bombs, bullets, and other ammunition affects not only those directly targeted by bombardments but also troops and people living near military bases, according to research published in the scientific journal Environmental Monitoring and Assessment. Mozhgan Savabieasfahani, an Iranian toxicologist and lead author of the report, said “alarming” levels of lead were found in the “baby” or “deciduous” teeth of Iraqi children with birth defects, compared with similar teeth donated from Lebanese and Iranian children.

“Deciduous teeth from Iraqi children with birth defects had remarkably higher levels of Pb [lead],” she said during a recent visit to London. “There were 270 of these pits burning 24/7, sometimes for years. Some are still burning today. Climate Change and Indian Agriculture. Climate change is any significant long-term change in the expected patterns of average weather of a region (or the whole Earth) over a significant period of time. 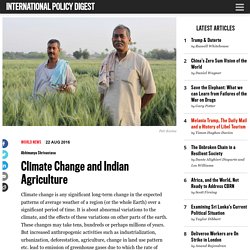 It is about abnormal variations to the climate, and the effects of these variations on other parts of the earth. These changes may take tens, hundreds or perhaps millions of years. But increased anthropogenic activities such as industrialization, urbanization, deforestation, agriculture, change in land use pattern etc. lead to emission of greenhouse gases due to which the rate of climate change is much faster. Climate change scenarios include higher temperatures, changes in precipitation, and higher atmospheric CO2 concentrations. GM crops can help India increase food production, says US expert - The Financial Express.