BroadcastAsia2014 plays hub to OTT content revolution - Internet OTTTV - AsiaOTT - Broadcast, Telecom, DVBCN, STB, IPTV, Internet Video, HBBTV, DLNA, Broadband, MultiScreen - PublicDTV. Netflix versus HBO: Together Forever. 7 Things You Should Know About 2nd Screen Interaction. 10 Things You Need To Know About The Future of Television. Should We Say Goodbye to the Stream? Alexis Madrigal of The Atlantic is sick of the stream — the practice of arranging online content with the newest stuff at the top, followed by a never-ending, reverse-chronological list of everything that preceded it. 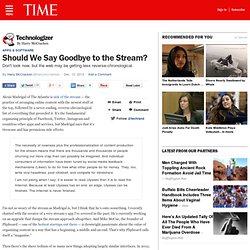 It’s the fundamental organizing principle of Facebook, Twitter, Instagram and countless other apps and services, but Madrigal says that it’s tiresome and has pernicious side effects: The necessity of nowness plus the professionalization of content production for the stream means that there are thousands and thousands of people churning out more crap than can possibly be imagined. And individual consumers of information have been tuned by social-media feedback mechanisms (Likes!) To do for free what other people do for money. They, too, write viral headlines, post clickbait, and compete for mindshare.I am not joking when I say: it is easier to read Ulysses than it is to read the Internet.

I’m not as weary of the stream as Madrigal is, but I think that he’s onto something. Still Not Dead: 7 Myths About The Current State of the TV Industry ... Samsung Smart Home aims to integrate all your smart devices on one platform. LAS VEGAS—The problem with most connected home products is that the reality usually doesn’t live up to the name. 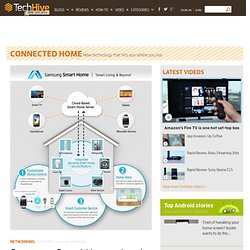 It’s not your whole home that’s connected—your Wi-Fi scale talks to one app, while your lights are controlled by a different app. So is that fancy smart smoke detector. Samsung wants to change this with Samsung Smart Home, an integrated platform that will let you connect and control all your smart devices (TVs, appliances, lights, security cameras, you name it) from a single Smart Home application. The electronics giant announced Samsung Smart Home on Sunday, one day before its press conference at CES 2014, and plans to roll out the product during the first half of this year. The Smart Home application will have three main sections at first: Device Control, Home View, and Smart Customer Service. Device Control lets you set up behaviors for when you’re home or away. Hooptap: Second Screen.

Gamification Will Strengthen the Second Screen. Mechanics and game psychology can be applied through the second screen. 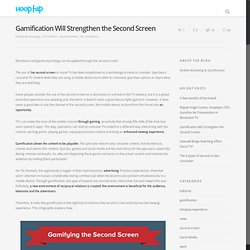 The use of the second screen or social TV has been established as a technological trend to consider. Spectators consume TV content while they are using a mobile device more often to comment, give their opinion or share what they are watching. Some people consider the use of the second screen as a distraction or a threat to the TV industry, but it is a global trend that spectators are adopting and, therefore, it doesn’t seem a good idea to fight against it. Most Effective Second Screen Apps for Viewer Engagement - Lingospot. "Where next for cable?" 5 predictions for 2014. 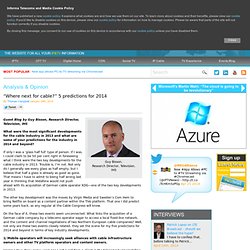 If only I was a ‘glass half full’ type of person. If I was, I could claim to be 50 per cent right in foreseeing what I think were the two key developments for the cable industry in 2013. Trouble is, I’m not. The other key development was the moves by Virgin Media and Sweden’s Com Hem to bring Netflix on board as a content partner within the TiVo platform. On the face of it, these two events seem unconnected. 1/ Mobile operators will increasingly seek alliances with cable infrastructure owners and other TV platform operators and content owners. 2bn TV-centric connected devices by 2017. 80% of Facebook TV chat comes from mobile - 4G Mobile & WIFI multiscreem - AsiaOTT - Broadcast, Telecom, DVBCN, STB, IPTV, Internet Video, HBBTV, DLNA, Broadband, MultiScreen - PublicDTV.

Up to a quarter of viewing TV audiences post about programmes on Facebook while they are on air and 80 per cent of TV-related chatter on the social network comes from a mobile device, a report from Facebook shows. 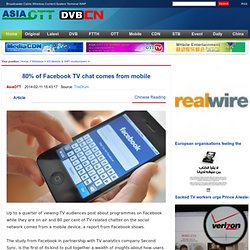 Infographic: The Rise of TV Everywhere. Pay TV providers are finding it ever more challenging to keep up with the changes brought by TV Everywhere and Over-the-Top (OTT) services. 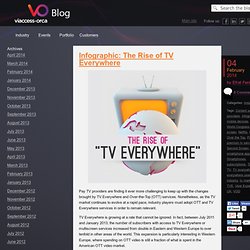 Nonetheless, as the TV market continues to evolve at a rapid pace, industry players must adopt OTT and TV Everywhere services in order to remain relevant. TV Everywhere is growing at a rate that cannot be ignored. In fact, between July 2011 and January 2013, the number of subscribers with access to TV Everywhere or multiscreen services increased from double in Eastern and Western Europe to over tenfold in other areas of the world. This expansion is particularly interesting in Western Europe, where spending on OTT video is still a fraction of what is spent in the American OTT video market. Regardless of video spending budgets, viewers worldwide are enthusiastically embracing TV Everywhere.