eSchool News What makes a great education tweet? How to write an education tweet that adds value and gets noticed Since getting its start less than a decade ago, more than a billion users have signed up for Twitter, with an estimated 320 million of them currently active. 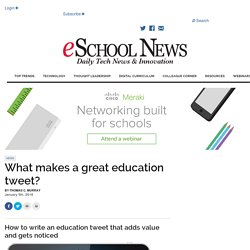 While Katy Perry (@katyperry) may top the charts with the most followers (80 million and counting), the average number of Twitter followers for those of us who aren’t pop sensations is a more modest 208. Regardless of who the user may be or the number of followers one may have, each tweet is restricted to a simple 140 characters. What you do with them is up to you. While some tweeters may elect to update the world when they brush their teeth, many choose to use Twitter as an effective communication tool; one that generates conversation, pushes thinking, and at times, brings about change. So what makes a Tweet valuable and worth reading? Twitter’s popularity among educators has continued to grow, but for a profession so strapped for time, where’s the most value found?

TICAL - Technology Information Center for Administrative Leadership. The Metropolitan Museum of Art Puts 400,000 High-Res Images Online & Makes Them Free to Use. On Friday, The Metropolitan Museum of Art announced that “more than 400,000 high-resolution digital images of public domain works in the Museum’s world-renowned collection may be downloaded directly from the Museum’s website for non-commercial use.” 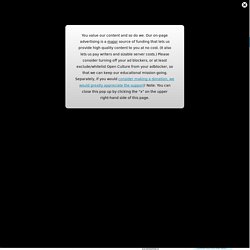 Even better, the images can be used at no charge (and without getting permission from the museum). In making this announcement, the Met joined other world-class museums in putting put large troves of digital art online. Witness the 87,000 images from the Getty in L.A., the 125,000 Dutch masterpieces from the Rijksmuseum, the 35,000 artistic images from the National Gallery, and the 57,000 works of art on Google Art Project. The Met’s online initiative is dubbed “Open Access for Scholarly Content,” and, while surfing the Met’s digital collections, you’ll know if a particular work is free to download if it bears the “OASC” acronym. In an FAQ, the Met provides simple instructions on how to figure that all out. Happy rummaging.

Teaching with the Library of Congress. Stop-action photography has become an integral part of our lives. 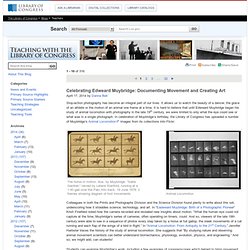 It allows us to watch the beauty of a dancer, the grace of an athlete or the motion of an animal one frame at a time. It is hard to believe that until Edweard Muybridge began his study of animal locomotion with photography in the late 19th century, we were limited to only what the eye could see or what was in a single photograph. In celebration of Muybridge’s birthday, the Library of Congress has uploaded a number of Muybridge’s Animal Locomotion images from its collections into Flickr. The horse in motion, illus. by Muybridge. “Sallie Gardner,” owned by Leland Stanford, running at a 1:40 gait over the Palo Alto track, 19 June 1878: 2 frames showing diagram of foot movements Animal Locomotion Colleagues in both the Prints and Photographs Division and the Science Division found plenty to write about this set, underscoring how it straddles science, technology, and art. 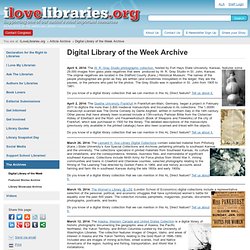 R. Gray Studio photographic collection, hosted by Fort Hays State University, Kansas, features some 29,000 images from glass plate negatives that were produced by W. R. Gray Studio in St. Do you know of a digital library collection that we can mention in this AL Direct feature? April 2, 2014: The Goethe University Frankfurt in Frankfurt-am-Main, Germany, began a project in February 2011 to digitize the more than 2,800 medieval manuscripts and incunabula in its collections. Scanned was The Divine Comedy by Dante Alighieri, written in northern Italy in the 14th century. March 26, 2014: The Leonard H.