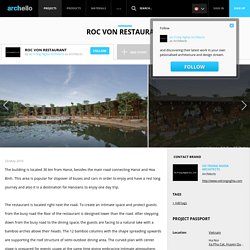 This area is popular for stopover of buses and cars in order to enjoy and have a rest long journey and also it is a destination for Hanoians to enjoy one day trip. The restaurant is located right next the road. To create an intimate space and protect guests from the busy road the floor of the restaurant is designed lower than the road. After stepping down from the busy road to the dining space, the guests are facing to a natural lake with a bamboo arches above their heads. 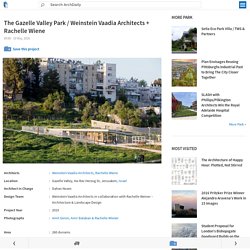 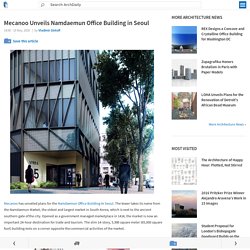 The tower takes its name from the Namdaemun Market, the oldest and largest market in South Korea, which is next to the ancient southern gate of the city. Opened as a government managed marketplace in 1414, the market is now an important 24-hour destination for trade and tourism. The slim 14-story, 5,900 square meter (65,000 square foot) building rests on a corner opposite the commercial activities of the market. The design of the tower is informed by its historic location and desire create a contemporary office building that merges the past with the present. To integrate into this context, the facade is a reinterpretation of windows found on traditional Korean houses. From Model to Masterpiece: SHoP Architects’ Uber Headquarters. Coro Field : Phase 1 on Architizer. Coro Field : Phase 1. WOHA Unveils “Fragments of an Urban Future” for the 2016 Venice Biennale. 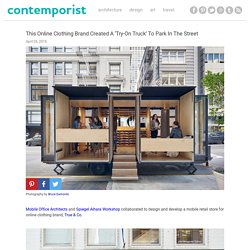 The design brief was to design a truck that would attract crowds, but also create an intimate and private customer experience within. From Model to Masterpiece: SHoP Architects’ Uber Headquarters. This Bright White Studio Was Designed For A Couple Of Interior Stylists. Photography by Alicia Taylor Australian architecture firm Marc&Co were asked by their clients, interior styling firm Indigo Jungle, to create a small pavilion in a subtropical garden that they could use as their studio space. 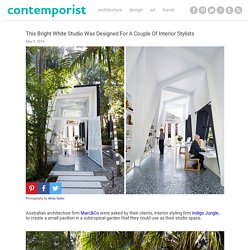 Working together with builders MCD Construction, the architects created a structure with an angled super skinny entry door that welcomes guests. As they enter the pavilion, the dark building is forgotten as it opens up to an all white interior, creating a sense of space and openness. Foster + Partners - Project - Maggie’s Cancer Centre. The new Maggie’s Cancer Centre in the grounds of The Christie Hospital in Manchester was opened today by HRH The Duchess of Cornwall – the president of Maggie’s. 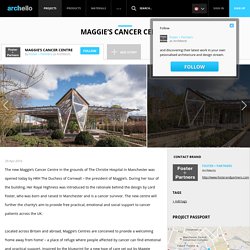 During her tour of the building, Her Royal Highness was introduced to the rationale behind the design by Lord Foster, who was born and raised in Manchester and is a cancer survivor. The new centre will further the charity’s aim to provide free practical, emotional and social support to cancer patients across the UK. Located across Britain and abroad, Maggie’s Centres are conceived to provide a welcoming ‘home away from home’ – a place of refuge where people affected by cancer can find emotional and practical support. 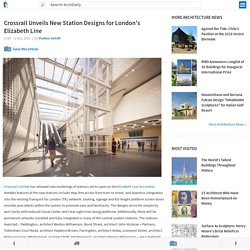 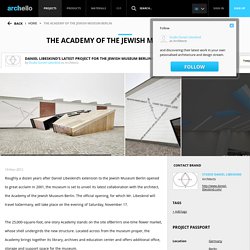 The official opening, for which Mr. Libeskind will travel toGermany, will take place on the evening of Saturday, November 17. The 25,000-square-foot, one-story Academy stands on the site ofBerlin’s one-time flower market, whose shell undergirds the new structure. Located across from the museum proper, the Academy brings together its library, archives and education center and offers additional office, storage and support space for the museum. Wood School. Kengo Kuma and Cornelius+Vöge Release Plans for Hans Christian Andersen Museum in Odense. Kengo Kuma & Associates, in a team with Cornelius+Vöge and landscape architects MASU planning, have revealed plans for the Hans Christian Andersen Museum in Odense, Denmark. 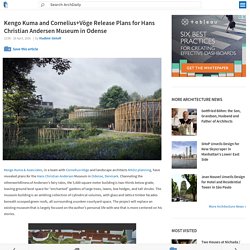 The project will replace an existing museum that is largely focused on the author’s personal life with one that is more centered on his stories. "The proposal has a unique quality,” said Odense Mayor and jury member Anker Boye. Atelier Kastelic Buffey - Project - Story Pod. The Story Pod, a community-supported lending library designed by Atelier Kastelic Buffey (AKB), is helping to invigorate the Town of Newmarket. 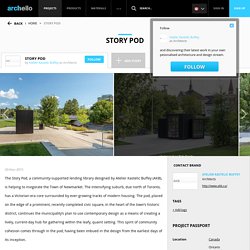 The intensifying suburb, due north of Toronto, has a Victorian-era core surrounded by ever-growing tracks of modern housing. The pod, placed on the edge of a prominent, recently completed civic square, in the heart of the town’s historic district, continues the municipality’s plan to use contemporary design as a means of creating a lively, current-day hub for gathering within the leafy, quaint setting. Atelier Kastelic Buffey - Project - Story Pod. The Big Scoop: Kengo Kuma’s Sculpted Tower Is Set to Rise in Vancouver. Ian Gillespie of Vancouver developer Westbank recently announced architect Kengo Kuma as the latest to partner with the company in its ongoing expansion of the city’s skyline. Kuma will add to a list of high-rise projects underway and completed by BIG, Henriquez Partners Architects and James KM Cheng Architects, among others.

BIG’s Vancouver House and the Henriquez’s TELUS Garden Office Tower have just won categories in this year’s Architizer A+ Awards, illustrating the relevance of Westbank’s projects to the urban landscape of Canada and to contemporary architecture more broadly. While Kuma’s body of work does not yet include the skyscrapers that populate the downtown core, his projects are known for paying attention to their surrounding environments. Sayama Forest Chapel. 30 Captivating Ceilings That Would Be A Honor To Lay Under. Advertisement Most people have pretty boring white ceilings.

Formation LaserCut 28/04/16. Prince Mahidol Hall. Crystal Houses / MVRDV. Duco Ventilation & Sun Control - Project - "Key role for Duco in indoor climate of architecturally impressive primary school" School buildings don't always appeal to the imagination. They're all much the same, but sometimes one stands out that has the power to surprise you or, in this case: that you can't take your eyes off. Carlota Hotel / JSa.

Architects Location Río Amazonas 73, Col. Chupei Reception Center. Pathé Foundation / Renzo Piano Building Workshop. Architects Location 73 Avenue des Gobelins, 75013 Paris, France Partner and Associate in Charge B. DCPP ARQUITECTOS - Project - DISTRITO FIJO CYCLING CLUB. Distrito Fijo is a retailing Project with 85 built square meters. It is located inside Juarezdistrict in Mexico City. MVRDV Partners with Traumhaus to Reinvent Affordable Living in the Suburbs. MVRDV and Traumhaus, a producer of low-cost, high-quality homes based on standardized elements, have teamed up to develop a 27,000 square meter project redeveloping former US Army barracks in Mannheim, Germany. The Funari project, named after the one of five districts in the Benjamin Franklin barracks, joins housing, gardens and public spaces, in a collection of varied typologies meant to attract different types of households and demographics.

The hope is that such heterogeneity will upend traditional perceptions of village life as territorial and segregated. MVRDV calls the concept “the fully pedestrianized ‘village,’” a place where paths meander through communal spaces such as sports parks and themed eco-environments like fruit alleys and buttery gardens. Ford Foundation Renovations by Gensler Approved by New York Landmarks Commission.

Heart of Glass: 9 Illusive Façades Hidden in Plain Sight. Meditation Pavilion & Garden. Atelier 2B's "Soft in the Middle" Rethinks Modernism for An Age of Collaboration and Sharing. In his book We Have Never Been Modern, philosopher Bruno Latour concludes that an inability to make humanity and nature inherently separate is one of Modernism’s most misguided tropes. Thus, contemporary designers that hope to riff on or have continuity with modernism must understand that architecture, even at its most aestheticized, is not hermetically sealed off from the outside world - and that therefore modernism is not a plateau of design, but another base camp on the road to further refinement.