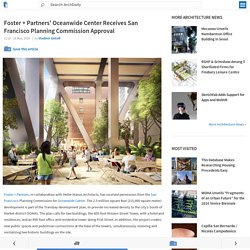 The 2.3 million square foot (215,000 square meter) development is part of the Transbay development plan, to provide increased density to the city’s South of Market district (SOMA). The plan calls for two buildings, the 605-foot Mission Street Tower, with a hotel and residences, and an 850-foot office and residential tower along First Street. LPzR architetti associati - Project - K19 Milano. The historic center of Milan stands out for its private courtyards with unsuspected urban landscapes. 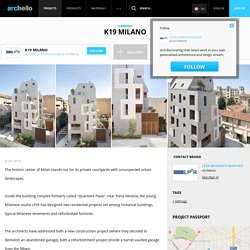 Inside the building complex formerly called "Quartiere Piave", near Porta Venezia, the young Milanese studio LPzR has designed two residential projects set among historical buildings, typical Milanese tenements and refurbished factories. The architects have addressed both a new construction project (where they decided to demolish an abandoned garage), both a refurbishment project (inside a barrel-vaulted garage from the fifties). The refurbishment project K19A is marked by a series of barrel vaults with different heights. The volume is completely hidden by the surrounding buildings: the succession of curved elements coated with titanium zinc can only be seen from above.

The internal layout is a complex jigsaw puzzle that gives rise to apartments on multiple levels, each with balcony, terrace or patio. Wine Heritage Longen-Schlöder. Baroque Court Apartments. Ellevuelle architetti - Project - RESTORATION OF THE OLD TEXTILE MILL IN MODIGLIANA. The old building has always rejected anonymity, declaring its presence with simple but clear architectural elements. 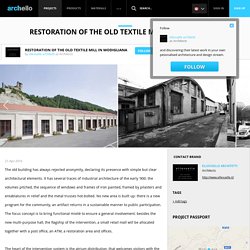 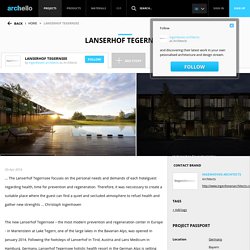 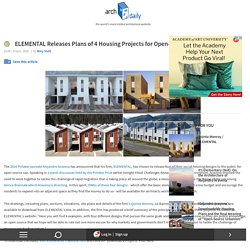 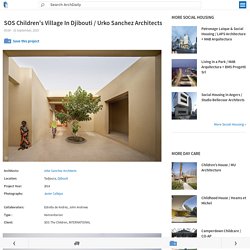 Djibouti is located in the Horn of Africa, which suffers from persistent droughts and severe scarcities. We were approached by SOS Kinderdorf to design a residential compound of 15 houses where to run their family-strengthening programmes. Jean-Paul Viguier Designs a Mixed-Use Timber Frame Tower in Bordeaux. The Tailored House / Liddicoat & Goldhill. Architects Location 121 Milson Rd, London W14, United Kingdom Structural Engineers Lyons O’Neill Area 185.0 sqm Project Year 2014 Photographs Will Scott, Courtesy of Liddicoat - Goldhill The brief called for a variety of spaces, offering expansive settings for gathering, and inviting inner sanctums for moments of solitude or contemplation.This was all to be set within a house of sufficient stature and repose to address the massive mid-Victorian townhouses on all sides. 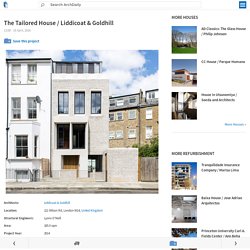 The clients drew an analogy between their new house and a tailored suit - recognisable, elegant and simple when viewed as a whole, but revealing individuality and material opulence in detail. A house previously stood on the site but, was destroyed by bombing in WW2. Since then, the locality has been designated a Conservation Area and neighbouring buildings have acquired Rights to Light.Winning Planning Permission therefore involved delicate and protracted multilateral negotiation. D.A architectes - Project - MILITARIES HOSTING. Natoma Architects - Project - 8 Octavia. URBAN CONTEXT The site is where the elevated 101 Freeway connects to the surface streets at Market and becomes Octavia Boulevard – the entrance to north/west sector of San Francisco. 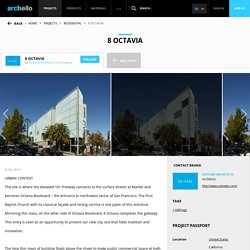 The First Baptist Church with its classical façade and strong cornice is one pylon of this entrance. Mirroring this mass, on the other side of Octavia Boulevard, 8 Octavia completes the gateway. This entry is seen as an opportunity to present our new city, one that folds tradition and innovation. The long thin mass of building floats above the street to make public commercial space at both ends. Traditional San Francisco facades are pretty, with delicate vertical articulation, but now buildings also have other work to do. These architects designed and built a concept for building affordable homes over existing parking lots. © ZED Factory British firm, Bill Dunster Architects, have always been committed to low carbon building and development. 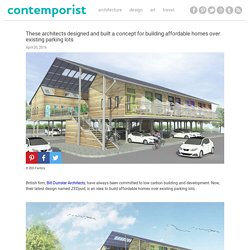 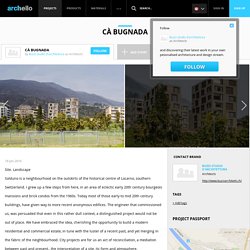 Landscape Solduno is a neighbourhood on the outskirts of the historical centre of Locarno, southern Switzerland. I grew up a few steps from here, in an area of eclectic early 20th century bourgeois mansions and brick condos from the 1960s. Today most of those early-to mid 20th century buildings, have given way to more recent anonymous edifices. See how these designers made a small apartment feel bigger than it is. Photography © MoreDesignOffice Finding an apartment in Shanghai can be challenging at best, and finding a large apartment can be even harder.

Philippon Kalt Architectes Urbanistes - Project - SOCIAL HOUSING UNITS. Mixed and adaptable construction solution The construction principle is based on a concrete structure (foundations and load-bearing walls) and a lightweight facade. The façade, developed just for this project, acts as insulation, offering an effective technical solution. It is separated from the structure, eliminating thermal bridges, and can change to adapt to future requirements without necessarily changing the building's essential features. It also allows more attention to be paid to the non-structural work. Passive design The bioclimatic approach used for this project has made it possible to reduce the building's heating needs. To limit maintenance and operating costs, no additional renewable energy has been installed, except the connection to the virtuous geothermal heat network. RobitailleCurtis, Inc. - Project - Laurentian Ski Chalet. This modern ski chalet was designed as a weekend retreat for a family with school age children.

Sited on the steep slope of a former ski hill, Mont-Jasper, near the village of Saint-Donat. At an elevation of 2,435 feet above sea level, the site is among the highest residential building lots in the Laurentians and Lanaudière regions. Tsukiji Room H / Yuichi Yoshida & associates. Tsukiji Room H / Yuichi Yoshida & associates. CREO and JAJA to Design Home for Children with Autism Near Copenhagen. Spatial Oddities: Breaking up Space in 11 Modular Homes. Chmielna Apartment, Gdańsk, 2014 - Raca Architekci. South End Apartment, Boston, 2015 - over, under.