Villa Boréale, Québec, 2015 - Cargo Architecture. The Villa Boréale is a charming contemporary residence located in Charlevoix, an eastern region of the Quebec Province well known for its wooded valleys, skiable mountains and breathtaking points of view.

At the heart of the boreal forest, the Villa is set on a sloped and private site, matching up nicely with the ubiquitous vegetation of the surroundings. Green Box on Architizer. 7 Design Lessons To Learn From This Awesome Roof Deck In Chicago. Photography by Tony Soluri When dSPACE Studio were designing this roof top deck for a building in Chicago, they really thought about how to create an urban oasis within the downtown core. 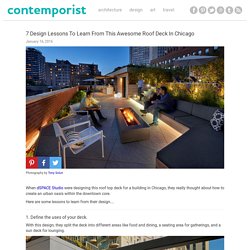 Here are some lessons to learn from their design… 1. Define the uses of your deck. A Potted History: Thomas Heatherwick’s Architectural Gardens. The English countryside is known for its rolling hills, green fields and luscious gardens, but British designer Thomas Heatherwick’s studio is located in the most urban of settings, near King’s Cross Station in the heart of London. 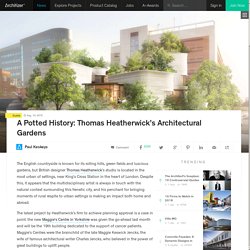 Despite this, it appears that the multidisciplinary artist is always in touch with the natural context surrounding this frenetic city, and his penchant for bringing moments of rural respite to urban settings is making an impact both home and abroad. The latest project by Heatherwick’s firm to achieve planning approval is a case in point: the new Maggie’s Centre in Yorkshire was given the go-ahead last month and will be the 19th building dedicated to the support of cancer patients. Maggie’s Centres were the brainchild of the late Maggie Keswick Jencks, the wife of famous architectural writer Charles Jencks, who believed in the power of great buildings to uplift people. Add To Collection Save this image to a collection. Ion Popusoi - Project - Damian House.

8 Toys Designed by Architects From the 1940s to Today. When did you first realize you wanted to become an architect? 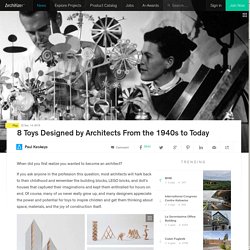 If you ask anyone in the profession this question, most architects will hark back to their childhood and remember the building blocks, LEGO bricks, and doll’s houses that captured their imaginations and kept them enthralled for hours on end. Of course, many of us never really grow up, and many designers appreciate the power and potential for toys to inspire children and get them thinking about space, materials, and the joy of construction itself.

Add To Collection Save this image to a collection Tsumiki by Kengo Kuma; images © Ikunori Yamamoto Kengo Kuma is one such architect. Saigon House, Ho Chi Minh City, 2015 - a21studio. In Saigon, there is a story about Van Duong Phu, a masterpiece of architecture, built by Mr. 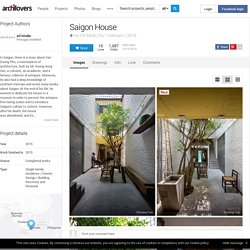 Vuong Hong Sen, a culturist, an academic, and a famous collector of antiques. Moreover, he also had a deep knowledge of southern Vietnam and wrote many books about Saigon. At the end of his life, he wanted to dedicate his house to a museum in order to prevent the antiques from being stolen and to introduce Saigon's culture to visitors. However, after his death, the house was abandoned, and its spirit was totally lost. We've recognized that although being respected and successful in his works, he failed in passing his love to his family. The owner of Saigon house is one who loves Saigon. Moreover, inspired by the Van Duong Phu story, she would like this house to be the place where she can share her memories about the furniture to kids so that they know how to cherish the place where they grow up. Cabin Fuglevik. BHM. A Mid-Century Modern House in California Gets A Remodel. Photography ©2015 Mariko Reed. 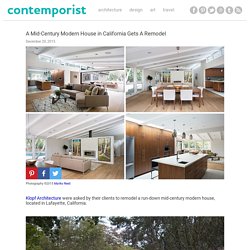 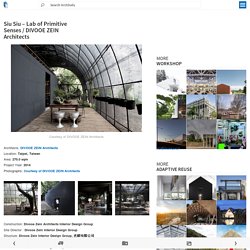 As human beings (ourselves) are detached from civilization to access a lifestyle of scanty materials, our inner animality generated from primitive natural habitat is emancipated. Inexplicably, we come to our instinctive senses. Siu Siu Laboratory of Primitive Senses is a workshop set to explore the environmental transition between urban space and natural forest. The same concepts are also implanted into the architectural design. Plant-in-City's Architectural Terrariums. With the ease of upkeep for air plants and terrariums—not to mention their flourishing, eco-wonderland-like contributions to offices and living spaces—there is an array of curious new options on the market. 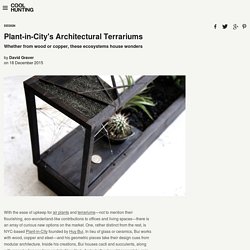 One, rather distinct from the rest, is NYC-based Plant-in-City founded by Huy Bui. In lieu of glass or ceramics, Bui works with wood, copper and steel—and his geometric pieces take their design cues from modular architecture. Inside his creations, Bui houses cacti and succulents, along with moss he forages from upstate New York. And whether bought separately, or in sets, each terrarium is customizable, even after purchase. "I first started with the motivation of designing and building green walls for my workshop and home," Bui explains to CH. Bui and his collaborators source all their wood from sustainably harvested locations in New York state, and the wooden terrariums are made in his Brooklyn workshop. Miguel de la Torre Arquitectos - Project - Bartolache 1944. Fcc arquitectura - Project - Cella Bar. House in Shinkawa / Yoshichika Takagi. 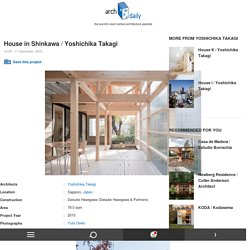 This is a house with a space that looks like an interior as well as an exterior. The space has a large air volume, covered with a roof and translucent surface which keep off the rain and wind. House Bierings / Rocha Tombal Architecten. Architects: Rocha Tombal Architecten Location: Utrecht, The Netherlands Architects: Ana Rocha, Michel Tombal Project Team: Iwona Wozniakowska, Enrique Otero Neira, Elena Cabrera Vacas Client: Fam. 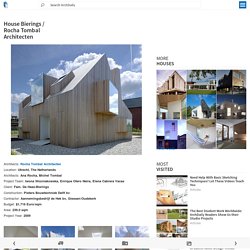 De Haas-Bierings Construction: Pieters Bouwtechniek Delft bv Contractor: Aannemingsbedrijf de Hek bv, Giessen/Oudekerk Budget: $1,716 Euro/sqm Area: 239.0 sqm Project Year: 2009 From the architect. From a basic form, defined by the municipal urban plan, sculptural “eyes” emerge with direct views to the varied countryside landscape. The form and orientation of the building avoid visual contact with the adjacent houses: at the ground floor the angled ceiling of the kitchen accentuates the intensive contact with the garden. On the first floor, the different shaped openings in the roof and façade offer, like “fingers of light”, varied daylight experiences. JVArchitekt - Project - House in Olomouc-Slavonin. Flat land to build a house is located in Olomouc-Slavonín.

Access to the site is from the east side, where it is also connected by new driveway. The surrounding lands were until recently used as private gardens. Due to construction of a new access road (including utilities) in place of the existing dirt road, housing development in the area started. House proposal is designed to create maximum privacy for its inhabitants from their surroundings. Capital A Architecture - Project - Contemporary Extension to 1930's House. Capital A have made a classic 1930’s Edinburgh house fit for modern life by adding an elegant contemporary extension. Construction of an elegant contemporary extension has recently been completed in Edinburgh. The extension was designed by Níall Hedderman, director of Capital A Architecture Ltd.

The project was commissioned by Donal McBreen and Emma Russell, who needed to alter their 1930’s one storey, square plan, detached house. “There are thousands of similar houses across suburban Edinburgh, they are hugely popular but their original layout is unsuitable for modern life” Níall says. This house had enough bedrooms for Donal and Emma’s young family but it didn't take advantage of the large rear garden. Níall’s design of an L-shaped open plan space to the rear and side has successfully resolved all of these issues.

A Home Of Brick And Concrete For A Young Family In Sydney. Photography by Luc Remond THOSE Architects have recently completed a light-filled home for a young family in Sydney, Australia. The home was originally owned by the clients grandmother, but needed an update, as it was designed over 60 years ago, and was unsuitable for the lifestyle of a young family today.

One of the key features added to the home, are these large windows that allow you to sit on the window sill. Sterna Residence I. Force4 - Project - The Floating Kayak Club. 2-Dec-2015 The Floating Kayak Club is located on the water pulled away from the shore, which highlights the building as a sculptural object and focuses on kayaking as an outdoor water sport. As the building floats, the relationship between the building and the water is so close that the user gets the full experience of practicing the sport in its true environment. Two volumes, one dedicated to the users, the other to the kayaks, creates a courtyard surrounding a central water space angled to give the users full advantage of the direct sailing route into the fjord. The central water space strengthens the community and supports a 'club-feeling'. Outdoor activities relating to community training and playing are raised to the roof deck, which in various ways is enabled with sport activities, barbecue area, outdoor kitchen, dining area and sundeck.

This 1980s house was updated with a lot of glass. This house has a huge set of doors that are 23 feet tall. House in Byoubugaura / Takeshi Hosaka. Eureka! Schmidt Hammer Lassen’s Masterplan Draws a New Skyline for Oslo. 4 Columns. The skin of timber fringing on these townhomes, is meant to be a modern take on Victorian-era wrought iron latticework. Rasų Namai. Tools of the Trade: 10 Wooden Workshops Across the World. Starting Your Own Practice: The Challenges and Rewards, According to ArchDaily Readers.