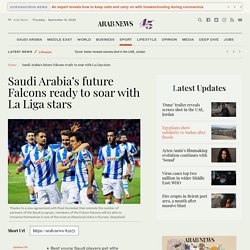 The club hinted at legal action to force the deal through. “Newcastle United can confirm that the Premier League (PL) has rejected a takeover bid made by PCP Capital Partners, the Reuben Brothers and the Public Investment Fund of Saudi Arabia (PIF) based on its owners and directors test,” said a statement on the club’s website. “This conclusion has been reached despite the club providing the Premier League with overwhelming evidence and legal opinions that PIF is independent and autonomous of the Saudi Arabian government.” Early this year, the Kingdom was asked for and gave legal assurances from the highest level that the PIF was an independent body, which the English football governing body appears to have ignored. Pandemic calls for decisive leadership, not strongman posturing. If a list of the strongman leaders of the world today were to be made, the names of Xi Jinping of China, Rodrigo Duterte of the Philippines, Jair Bolsonaro of Brazil, Joko Widodo of Indonesia and Narendra Modi of India would immediately spring to mind. 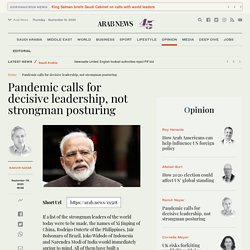 All of them have built a reputation for strong leadership that they feel is capable of steering their nation out of any difficult situation, using clear and firm methods to protect their citizens while bringing about radical change in the way these countries work. But, faced with the coronavirus disease pandemic, they have all — with the exception of Xi — fared badly. Even though the full data from China has not come through, all the indications are that the country at the root of the virus seemed to get to grips with it fairly early in the cycle. After weeks of failed attempts to cover it up, when China did finally acknowledge the presence of the virus it took immediate steps toward prevention and treatment. Saudi Arabia’s future Falcons ready to soar with La Liga stars. Dramatic end to SPL season as Damac pull off miraculous escape. RIYADH: The standings after the penultimate round of games in the 2019-20 Saudi Professional League season had set the scene for high drama on the final day of this marathon, disrupted campaign — and the action on Wednesday delivered this in spades. 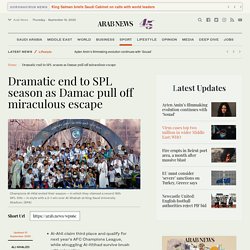 Struggling giants Al-Ittihad avoided the nightmare prospect of relegation, while their Jeddah neighbors Al-Ahli took third place in the league to secure qualification for next season’s AFC Champions League. Pandemic e-commerce spurs race for electric delivery vans. DAVENPORT: Delivery fleet operators face regulatory pressure in California and other states to buy electric vehicles, but a surge in package deliveries thanks to lockdowns has major firms itching to switch to electric. 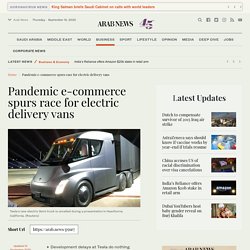 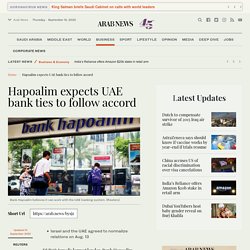 The UAE and Israel are due to sign the agreement, brokered by the US, on Sept. 15 at a ceremony held by US President Donald Trump. The three sides have talked up the economic opportunities that normalization would bring and several business cooperation agreements have already been signed. Hapoalim CEO Dov Kotler said a correspondent banking relationship facilitating direct money transfers between the countries would help develop trade and business ties. Indonesian students send mixed signals on remote learning. DIENG PLATEAU, Central Java: Dewi Listiani must spend hours standing and staring at a wall in her kitchen, where a phone screen relays online lessons until her remote learning class ends for the day. 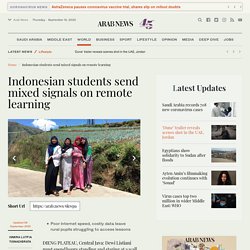 It is the only place in her home where she can access a strong internet connection. “There is a certain spot in the kitchen in my house where the network is stable, so I hang my phone on the wall, and I have to stand all the time during the online class to be able to view the screen,” the 14-year-old grade nine student told Arab News. She added that there were times when she has paid 3,000 Indonesian rupiahs (20 US cents) per day for 24-hour internet — a costly amount considering she needs access three to four times a week for online learning.

Listiani is not the only student facing problems. Daesh alive and well thanks to Iran’s militias. The territorial defeat of Daesh was simply the first of a long series of phases needed to destroy the terrorist organization and its ideology completely. 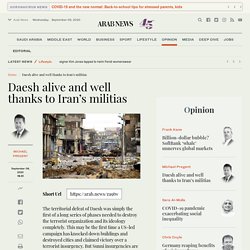 This may be the first time a US-led campaign has knocked down buildings and destroyed cities and claimed victory over a terrorist insurgency. But Sunni insurgencies are not defeated by punishing Sunni population centers and destroying cities in bombing campaigns. Insurgencies are grown when a sectarian government indiscriminately targets and disappears Sunni males in the tens of thousands. Billion-dollar bubble? SoftBank ‘whale’ unnerves global markets. Is SoftBank, the Japanese financial institution headed by Masayoshi Son, fueling a stock market bubble with its new strategy of speculating heavily in derivatives markets in technology shares? 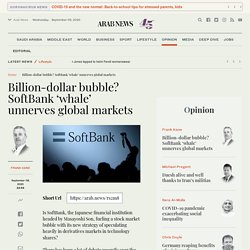 There has been a lot of debate recently over the role that Son and his traders are playing in global equities markets, after it emerged that they had pumped billions of dollars into aggressive positions in fast-growth, high-value US tech stocks. eSports have a bright future in Saudi Arabia. LONDON: Saudi Arabia exited the 2018 FIFA World Cup with a memorable victory over Egypt thanks to a last minute winner from Salem Al-Dawsari. 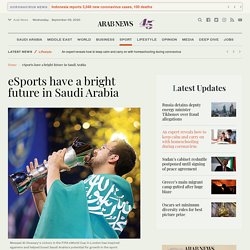 Weeks later, Mosaad Al-Dossary was winning the FIFA eWorld Cup in London, defeating Stefano Pinna of Belgium. The teenager, with the green flag of his homeland around his shoulders, lifted the trophy and collected a check for $250,000, a fine reward for years of practicing his gaming skills. With 20 million gamers trying to qualify for the event, the triumph was a big moment for the player, industry and a country that aims to become a major hub for the genre. It announced Saudi Arabia’s arrival in the growing world of eSports, which hopes to produce many more global stars as good as, or better than, Al-Dossary. Heat oust depleted Bucks to reach NBA East finals. LONDON: Saudi Arabia exited the 2018 FIFA World Cup with a memorable victory over Egypt thanks to a last minute winner from Salem Al-Dawsari. 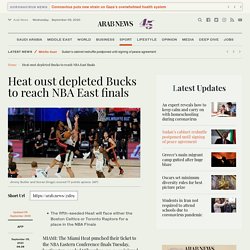 Weeks later, Mosaad Al-Dossary was winning the FIFA eWorld Cup in London, defeating Stefano Pinna of Belgium. The teenager, with the green flag of his homeland around his shoulders, lifted the trophy and collected a check for $250,000, a fine reward for years of practicing his gaming skills. With 20 million gamers trying to qualify for the event, the triumph was a big moment for the player, industry and a country that aims to become a major hub for the genre.

Africa’s tourism season — but where are the tourists? CAPE TOWN: Raino Bolz quickly diversified when his tourism business in South Africa’s winelands crashed to a halt in March because of the coronavirus pandemic. He sold a minibus — useless without tourists to ferry around — and bought a herd of pregnant cows. He will have to wait for the cows to have calves and for the calves to be old enough to sell before he can make money from them. That probably won’t be until early next year, but it is his insurance policy. US shale producers race for federal permits ahead of presidential election. HOUSTON: Oil producers in the top US shale fields are stockpiling drilling permits on federal land ahead of the November US presidential election, concerned that a win by Democratic candidate Joe Biden could lead to a clamp-down on oilfield activity. Federal permitting in the largest US oilfield in the Permian Basin, located in Texas and New Mexico, is up 80 percent in about the last three months, which analysts attribute to a hedge against a win by Biden, who currently leads US President Donald Trump by several points in national polling.

Biden has stated that he does not want to ban fracking outright, putting him at odds with many environmentalists and Democratic party activists. However, his climate plan includes banning new oil and gas permits on public lands, which industry groups say would hurt the economy and cut off an energy boom that has made the US the world’s largest crude oil producer. British Asian ‘pinned down by police’ after leaving cafe without buying anything. LONDON: A British-Pakistani man says he was pinned down by police during a stop and search after leaving a cafe without buying anything. Kashif Baig, 26, went into a London branch of Pret A Manger to buy a drink, but left when he saw the queue was too long.

Police said they questioned him after he was then seen going into the London Underground and coming back out again. Afghan vice president unharmed in attack in Kabul. LESBOS ISLAND: Greece’s largest migrant camp on the island of Lesbos was gutted by a huge fire early Wednesday, leaving over 12,000 fleeing asylum seekers homeless, with reports that the blaze was started by migrants revolting against coronavirus isolation rules. Firemen said the notorious Moria camp had been mostly destroyed but there were no known casualties so far, though a number of people were suffering minor respiratory problems from exposure to smoke. Government spokesman Stelios Petsas said an emergency would be declared across the entire island and reports of arson were under investigation.

NATO is an alliance in name alone. Foreign aid needs a rethink as a result of COVID-19. South Africa’s landowners fear for their property. WALKERVILLE, South Africa: On an abandoned private farm south of Johannesburg, the sound of hammers bashing nails into corrugated iron, brooms sweeping away the dust and a faint chatter of voices can be heard on a nearby road.

Thanks for listening, M. Macron … We love you too! Who is to blame for Lebanon’s mess? Minus stars, Nets clinch playoff spot in victory over Kings. NBA playoff picture comes into a bit more focus. Economic meltdown threatens Europe’s war on plastic waste. Iraq pledges full compliance with OPEC+ oil cuts. Russia, China, Iran trying to meddle in US 2020 election, warn Intel officials.