Once a month, Zoom into a night of storytelling with Pakistanis around the world  Pakistani FM assures Saudi counterpart of support to defend kingdom's territorial integrity. ISLAMABAD: Tania Aidrus, Special Assistant to the Pakistani Prime Minister on Digital Pakistan, said this week that IBM Corp. would soon be launching its free digital education platform focused on workplace learning and digital skills in Pakistan. 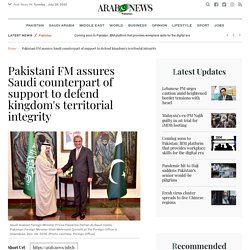 At its Think Digital conference in May, IBM announced the launch of Open P-TECH, which builds on the industry leading P-TECH program to equip 14-20-year old learners and educators with foundational technology competencies and training in technologies such as artificial intelligence, cloud computing and cybersecurity, along with professional skills like Design Thinking. “IBM is launching Open P-TECH in Pakistan to help develop talent and equip them with technical and professional proficiency in AI, Data Science, CyberSecurity, Cloud, etc — enabling our workforce for a #DigitalPakistan,” Aidrus said on Twitter. Makkah’s Grand Mosque ready to safely receive Hajj pilgrims. MAKKAH: Saudi Minister of Hajj and Umrah Dr. 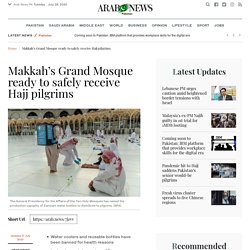 Mohammed Saleh Benten inaugurated on Monday the 45th Grand Hajj Symposium titled “Public Health Rules and their Scientific Applications in Light of the Prophet’s Guidelines and Practices.” The virtual conference was attended by a number of ministers, scholars, world-leading scientists, and health professionals in various fields from around the globe. It included five sessions, which covered a wide range of subjects in the fields of Prophetic medicine and preventive therapeutics. 45th Hajj Symposium: Scholars, health experts agree on safety first. JEDDAH: Final health and safety preparations have been made to receive Hajj pilgrims in Makkah in line with precautionary measures aimed at preventing the spread of the coronavirus disease (COVID-19). 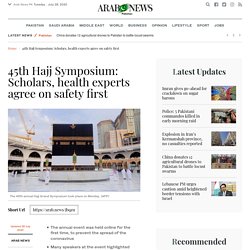 Mobile clinics, single-use Zamzam water bottles, and controls on movement have been put in place by Saudi authorities. The General Presidency for the Affairs of the Two Holy Mosques has designed and installed pathways to direct the flow of worshippers in the Grand Mosque and ensure commitment to social-distancing measures. It has also allocated specific entrance and exit doors to prevent crowding and provide for the smooth movement of pilgrims. The safety plan was drawn up in collaboration between the presidency, the Ministry of Hajj and Umrah, and security authorities. Lebanon to impose two-week coronavirus lockdown. BEIRUT: Lebanon is imposing a two-week coronavirus lockdown starting July 30, the country’s health minister said, as he slammed the “lack of community discipline and disregard” for all preventive measures and warned that the outbreak was taking a “dangerous turn.” 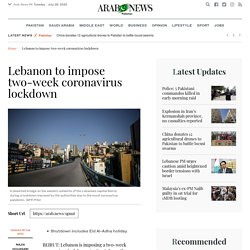 The number of confirmed cases on Monday reached 135 and Saturday’s cases were the highest since February at 175. “The number is very large and indicates the seriousness of this stage,” said Health Minister Hamad Hassan, following a meeting of a COVID-19 ministerial committee headed by Prime Minister Hassan Diab. He added that what was happening was another indication of the “rapid spread” of the virus within one week. “The infected person is now spreading the infection to 3 people.” The total lockdown of the country is from July 30 to August 3 and from August 6 until August 10, including the days of Eid Al-Adha.

Morocco sees travel mayhem after snap movement restrictions. BEIRUT: Lebanon is imposing a two-week coronavirus lockdown starting July 30, the country’s health minister said, as he slammed the “lack of community discipline and disregard” for all preventive measures and warned that the outbreak was taking a “dangerous turn.” 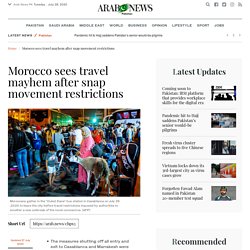 The number of confirmed cases on Monday reached 135 and Saturday’s cases were the highest since February at 175. “The number is very large and indicates the seriousness of this stage,” said Health Minister Hamad Hassan, following a meeting of a COVID-19 ministerial committee headed by Prime Minister Hassan Diab. He added that what was happening was another indication of the “rapid spread” of the virus within one week. “The infected person is now spreading the infection to 3 people.” The total lockdown of the country is from July 30 to August 3 and from August 6 until August 10, including the days of Eid Al-Adha. Oil up on weak dollar though US-China tensions weigh.

JOHANNESBURG: A pandemic-delayed African free trade deal, if fully implemented, could boost incomes across the continent, pull millions out of poverty and cushion against the negative fallout from COVID-19, the World Bank wrote in a report on Monday. 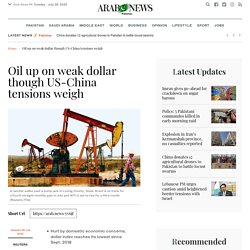 The African Continental Free Trade Area (AfCFTA) was due to come into force on July 1, but that proved unworkable after the virus forced widespread border closures and halted talks between governments over the removal of tariffs. It may now begin operating from the start of 2021. The pandemic is expected to cost Africa up to $79 billion in lost economic output this year alone with the additional risk of millions of job losses. “In this context, a successful implementation of AfCFTA would be crucial,” the report said. “(It) is a major opportunity for Africa, but implementation will be a significant challenge.

Once in force, the AfCFTA will bring together 1.3 billion people across 55 countries with combined GDP of $3.4 trillion. African trade deal could lift millions out of poverty. SINGAPORE: Oil prices edged higher on Monday helped by a weak dollar and expected US stimulus measures but gains were capped by rising global coronavirus cases and tensions between the United States and China. 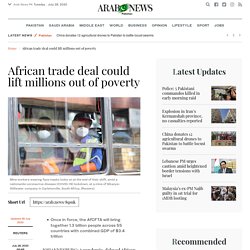 Brent crude rose 32 cents, or 0.7 percent, to $43.66 a barrel, while US West Texas Intermediate (WTI) crude was up to $41.62 a barrel or 33 cents. The US dollar index reached its lowest since September 2018, hurt by deteriorating US-China relations and domestic economic concerns as coronavirus infections showed no sign of slowing.

“Massive monetary stimulus has bullish implications for oil,” analysts from Raymond James said in a note, adding that oil prices have historically moved upwards with inflation spikes and that the current US money supply increase is unprecedented. Saudi Ports to develop massive grain terminal in Yanbu. JEDDAH: Global trade has been hit by new and accumulated import restrictions just as economies need to rebuild in the COVID-19 crisis, the World Trade Organization (WTO) said in a mid-year report on Friday. 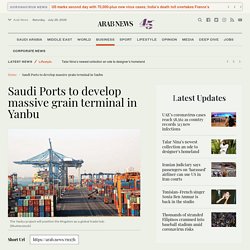 But some export constraints imposed on surgical masks, medicines and medical equipment early in the pandemic are being rolled back, it said. “Although the full impact of the pandemic is not yet reflected fully in trade statistics, it is expected to be very substantial,” WTO Director General Roberto Azevedo said. Coronavirus crisis opens up new vistas for Middle East’s 3D printing pioneers.

DUBAI: Qais Sabri and his colleagues at Jordanian startup Eon Dental have taken only a few years to show how Middle Eastern entrepreneurs can level the playing field and compete internationally. 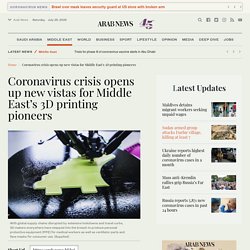 The additive manufacturer sells its 3D-printed dental aligners to customers in the US, Germany, Singapore and the Middle East, and is now bringing its expertise to the fight against COVID-19 with 3D-printed medical equipment. “3D printing has disrupted various markets that require a lot of industrial infrastructure and capital costs. Yemen currency crash has ‘done more damage’ than war, experts say. AL-MUKALLA: The depreciation of the Yemeni currency has caused more damage to Yemenis than the raging conflict in the country, economists and locals have said. 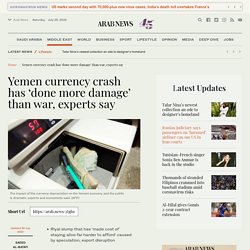 The Yemeni riyal traded 752 against the US dollar on Thursday’s black market for the first time in two years, falling from 700 in recent weeks. Saudis celebrating Eid urged to maintain safety measures. JEDDAH: Saudi health officials on Thursday urged Muslims celebrating Eid Al-Adha not to drop their guard in sticking to safety measures aimed at stopping the spread of the coronavirus disease (COVID-19).

The Ministry of Health stressed the need for people to maintain social distancing rules, continue to wash their hands regularly, and wear a face mask. “During this blessed occasion (Eid Al-Adha), there will be several opportunities during gatherings and activities for all of us to connect, but that connection needs to be mindful of social distancing,” said ministry spokesman Dr. Mohammed Al-Abd Al-Aly. Any interactions should be safe, healthy, and danger-free, to avoid the spread of the virus. “We can be happy around each other and safe.

Turks defrauding history with Ottoman monuments narrative. The Ottoman Turks committed the most severe crimes against Arab Muslims and enjoyed oppressing and killing them. The Turks, in general, are now adopting a deceptive policy, which is that they cry over Islam and the sultanate, but they are in fact crying for their pride and power and presenting it in the name and protection of Islam for propaganda purposes. They aim to gain the support of Muslims of different nationalities, while, on the other hand, seeking to restore this power and authority through deceptive propaganda. Turkish historian Zakaria Qurshon, in a series of recent articles, talked about the establishment of the nation state as a magical method for researching history, and he argued that it was an inevitable matter. And when he wanted to criticize, he said that Saudi Arabia went completely against this trend.

‘Help us help you’: French envoy’s plea to Lebanon. BEIRUT: French Minister of Foreign Affairs Jean-Yves Le Drian began a two-day visit to Lebanon on Thursday with a call to “help us help you” amid the country’s worsening economic and financial crisis. Wearing a face mask featuring the French and Lebanese national flags, Le Drian said: “France stands with Lebanon in these difficult circumstances, as it has always done throughout history.” The minister, who arrived in Beirut late on Wednesday, called for reforms to help Lebanon tackle the problems plaguing the country’s economy. King Salman recovering from successful operation to remove gallbladder. DUBAI: The pilgrims’ health status was the main criteria used in selecting who would be allowed to participate in this year’s Hajj pilgrimage, state news agency SPA reported. The selection process was conducted in a transparent manner and focused on participants’ well-being, the report added, quoting Saudi Hajj Minister Mohammad Benten.

Saudi Arabia decided to limit participation in this year’s Hajj pilgrimage with the continued threat of coronavirus to ‘global public health’, the Hajj and Umrah ministry earlier said. Only Saudi residents and citizens under 65 years old join the pilgrimage and must take mandatory coronavirus testing and undergo quarantine. “This decision is taken to ensure Hajj is performed in a safe manner from a public health perspective while observing all preventative measures and the necessary social distancing protocols,” a statement from the ministry said. Saudi Arabia launches huge global sports project: Mahd Sports Academy. RIYADH: Saudi Arabia’s remarkable sporting transformation of recent years is set to continue with the launch of a brand new venture called the Mahd Sports Academy on July 27, through support from Crown Prince Mohammed bin Salman. The interest of Saudi Twitter users was piqued last week when a new account started to publish videos hinting at a new project, with the Kingdom’s Sports Minister Prince Abdulaziz bin Turki Al-Faisal promoting the content from his personal account with a caption: “The time has come.”

Macron wants EU to punish Turkey. US fighter jets intercept Iranian passenger plane over Syria. BEIRUT: An Iranian passenger plane was intercepted by two fighter jets in Syrian airspace during a flight from Tehran to Beirut. The pilot of the Mahan Air plane said two US jets approached the airliner forcing him to change altitude to avoid a collision, Iran’s IRIB news agency reported. Lebanon court orders the seizure of bank governor’s assets. BEIRUT: Judge Faisal Makki issued an order on Monday to freeze the assets of Riad Salameh, governor of the Banque Du Liban, the central bank, including personal property in his house in Rabieh, Mount Lebanon.

Dhaka opts for two wheels instead of four. With assault on Iraq, Turkey and Iran cement a partnership in crime. American dollars boost black market in Lebanon. Saudi Arabia back in business as coronavirus curfews end. Saudi Arabia chairs UN counter-terrorism meeting. Remembering the extraordinary Benazir Bhutto on her birth anniversary. Saiful Azam – an outstanding pilot and officer. Women bear the brunt of virus fallout. Which one is the best airline in the world? Saudi Arabia improves on inflation, ease of doing business in global competitiveness report.