"I had no idea that learning Arabic would be possible for me!" "My journey with the Arabic language began in March of 2019, when I made the best decision of my life and converted to Islam, Alhamdulillah. 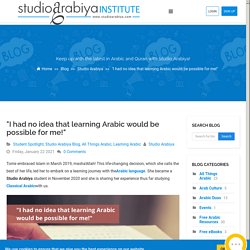 When I say my journey began, that does not mean I was actively trying to learn the language. For about a year after becoming a Muslim, I truly believed that I would never be able to learn Arabic, and I even tried to tell myself that I did not need to learn it. Thankfully, my mindset began to shift as I was diving deeper into Islamic studies, trying to grasp the full beauty of Islam, and I realized the desire I had to understand the language of this complete and amazing religion. Before becoming a student at Studio Arabiya, I had no prior knowledge of reading, writing, or understanding the Arabic language. All I had been familiar with were the five daily prayers and several Arabic sayings and duas. [VIDEO] Learn The Tajweed Rule Of Qalqalah.

7 Tips to Prepare for Ramadan 2021 (Pandemic or Not) - Blog. Last year, as Ramadan was approaching, we were still in a state of confusion. 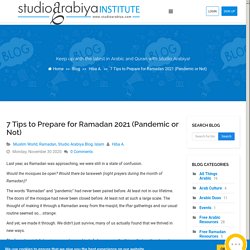 Would the mosques be open? Would there be taraweeh (night prayers during the month of Ramadan)? The words "Ramadan" and "pandemic" had never been paired before. At least not in our lifetime. The doors of the mosque had never been closed before. The Blessings of Friday. Friday is a special day for Muslims and there are many blessings associated to it. 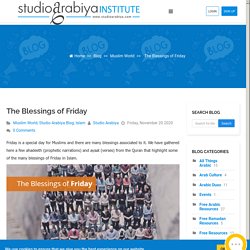 We have gathered here a few ahadeeth (prophetic narrations) and ayaat (verses) from the Quran that highlight some of the many blessings of Friday in Islam. 1. Friday is the best of days. The Prophet, peace and blessings be upon him said, ‏خَيْرُ يَوْمٍ طَلَعَتْ عَلَيْهِ الشَّمْسُ يَوْمُ الْجُمُعَةِ فِيهِ خُلِقَ ‏‏ آدَمُ ‏ ‏وَفِيهِ أُدْخِلَ الْجَنَّةَ وَفِيهِ أُخْرِجَ مِنْهَ 10 Inventions You Didn't Know Came From Muslims.

It is often said that no religion has had a greater impact on our world and its culture than Christianity. 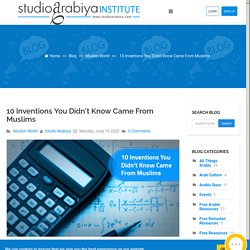 It is certainly true that many of our greatest works of art and literature were inspired by the Bible and the ministry of Jesus. However, in the Western world, we have a tendency to become so caught up in Christian contributions that we overlook those which came from Islam. Believe it or not, Islam has contributed just as much to our society as Christianity. We're not just talking about Islamic strongholds - such as the Middle East - when we say that.

Even in the West, we rely on inventions and ideas which have their roots in Islam on a daily basis. The Toothbrush In anti-Islamic propaganda, we often see Muslims depicted as unhygienic. The miswak is considered by historians and Muslims alike to be the very first toothbrush. It is thought that Muhammad himself used the miswak to maintain superior oral hygiene. A Look at The Muslim’s Burial. As Muslims we pride ourselves in belonging to a belief system that speaks on all aspects of our lives. 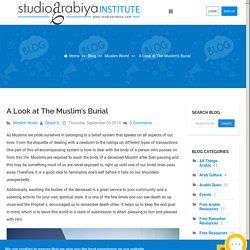 From the etiquette of dealing with a newborn to the rulings on different types of transactions. One part of this all-encompassing system is how to deal with the body of a person who passes on from this life. Muslims are required to wash the body of a deceased Muslim after their passing and this may be something most of us are never exposed to, right up until one of our loved ones pass away.Therefore, it is a good idea to familiarize one's self before it falls on our shoulders unexpectedly.

How to guide your children to love the Quran from Birth. When you observe a parent and a newborn, it's tough to prove that any sort of learning is taking place. 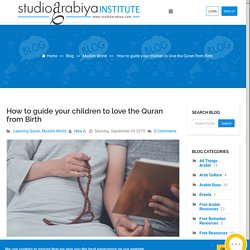 However, we know that babies are constantly learning and absorbing, even before their birth! So though we can't necessarily prove in a moment, we have to trust that all the little things are being fed into their little brain and will come together soon enough. But how do you guide a child to love the Quran? Like we do any other beneficial act. By our actions, and by our words and by making it fun! A baby in the womb can hear the world around him/her as early as 18 weeks. Purity is Half of Faith. Allah (s.w.a) only accepts that which is pure, so we as Muslims strive to achieve purity, both of body and soul. 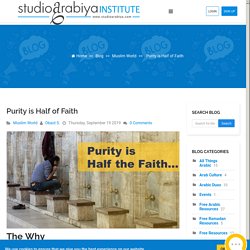 In His infinite mercy, Allah (s.w.a) has given us many ways to achieve this purity, one of which is wudu. Tajweed Rules: Stopping & Pausing Signs in the Quran - Blog. مـ – The Mandatory Stop One must stop at this sign, which is a small "mīm" letter in the Arabic alphabet. 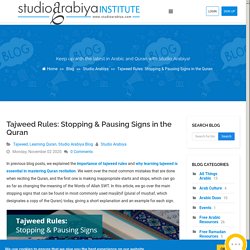 Failing to stop at this sign would change the meaning of the verse or sentence. إِنَّمَا يَسْتَجِيبُ الَّذِينَ يَسْمَعُونَ ۘ وَالْمَوْتَىٰ يَبْعَثُهُمُ اللَّـهُ ثُمَّ إِلَيْهِ يُرْجَعُونَ "Only those who hear will respond. But the dead - Allah will resurrect them; then to Him they will be returned. " Pumpkins, Arabic and Halloween Words - Blog. Halloween and Arabic Words. 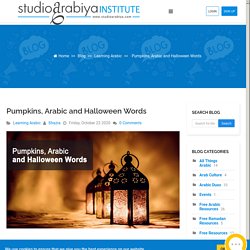 10 Ways to Help You Memorize Quran This Year. 1. 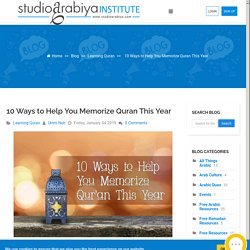 Make the sincere intention to memorize the QuranAllah's Messenger said: "Certainly, Allah does not look at your shapes (appearance) or wealth. But He only looks at your hearts and deeds. "