Northgard on Steam. Here's the transcript of what was said during the last AMA, hosted on Northgard TV by the very dedicated and talented Weihn8smann! 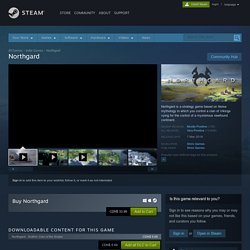 Shiro Games: Something that will be coming in the future. More info at a later date.Question: Why are there 2 special objective tiles on the Volcano? Shiro Games: This is a bug and we are working on fixing it.Question: Why did we decide to use Ragnarok as the update theme since Ragnarok is meant to be the ‘final event’? Shiro Games: During the development process Ragnarok always seemed like the theme we could really bring to life. LEGO® MARVEL's Avengers on Steam. Amnesia: The Dark Descent on Steam. 9 October Are you a Linux or a Mac user? 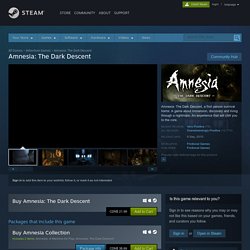 Amnesia: The Dark Descent's Hard Mode update is now creeping onto your platforms too! Don't know what the Hard Mode is? Here's a reminder.It is really just as the title suggests: a mode that makes it harder to beat the game. You know, in case it wasn’t stressful enough for you.The Hard Mode has the following features:- Autosaves are disabled, and manual saving costs 4 tinderboxes- Sanity dropping to zero results in death- Less oil and tinderboxes throughout the levels- Monsters are faster, spot the player more easily, deal more damage and stay around for longer- There is no danger music when the monsters are near.So in summary: the environments are harsher, the monsters more unforgiving, insanity is deadly, and death is final – unless you pay a toll.You can pick between normal mode and Hard Mode when starting a new game of Amnesia: The Dark Descent. 13 commentsRead more. 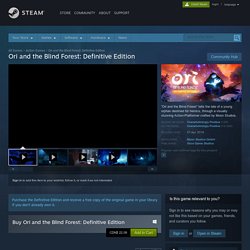 • Discover Naru’s past in two brand new environments. • Master two powerful new abilities – Dash and Light Burst. • Find new secret areas and explore Nibel faster by teleporting between Spirit Wells. The forest of Nibel is dying. After a powerful storm sets a series of devastating events in motion, Ori must journey to find courage and confront a dark nemesis to save the forest of Nibel. Celeste on Steam. Help Madeline survive her inner demons on her journey to the top of Celeste Mountain, in this super-tight, hand-crafted platformer from the creators of multiplayer classic TowerFall. 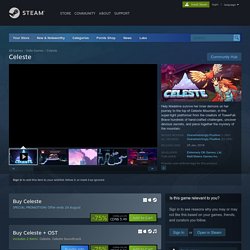 A narrative-driven, single-player adventure like mom used to make, with a charming cast of characters and a touching story of self-discoveryA massive mountain teeming with 700+ screens of hardcore platforming challenges and devious secretsBrutal B-side chapters to unlock, built for only the bravest mountaineersIGF “Excellence in Audio” finalist, with over 2 hours of original music led by dazzling live piano and catchy synth beatsPieThe controls are simple and accessible - simply jump, air-dash, and climb - but with layers of expressive depth to master, where every death is a lesson. Lightning-fast respawns keep you climbing as you uncover the mysteries of the mountain and brave its many perils. This is it, Madeline. Just breathe. You can do this.

Gorogoa on Steam. Winner of Debut Game at the 2018 BAFTA Games Awards, as well as Best Mobile Game and the Innovation Award at the GDC 2018 Choice Awards, Gorogoa is an elegant evolution of the puzzle genre, told through a beautifully hand-drawn story designed and illustrated by Jason Roberts. 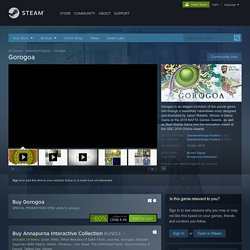 Mirror's Edge™ on Steam. About This Game In a city where information is heavily monitored, agile couriers called Runners transport sensitive data away from prying eyes. 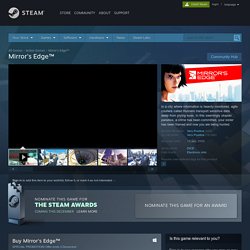 In this seemingly utopian paradise, a crime has been committed, your sister has been framed and now you are being hunted. You are a Runner called Faith and this innovative first-person action-adventure is your story. Discovery Tour by Assassin’s Creed®: Ancient Egypt on Steam. Portal 2 on Steam. Portal 2 draws from the award-winning formula of innovative gameplay, story, and music that earned the original Portal over 70 industry accolades and created a cult following. 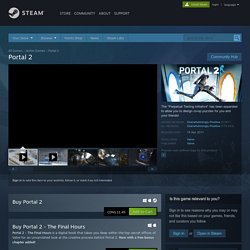 The single-player portion of Portal 2 introduces a cast of dynamic new characters, a host of fresh puzzle elements, and a much larger set of devious test chambers. Players will explore never-before-seen areas of the Aperture Science Labs and be reunited with GLaDOS, the occasionally murderous computer companion who guided them through the original game. The game’s two-player cooperative mode features its own entirely separate campaign with a unique story, test chambers, and two new player characters.

This new mode forces players to reconsider everything they thought they knew about portals. Success will require them to not just act cooperatively, but to think cooperatively.Product FeaturesExtensive single player: Featuring next generation gameplay and a wildly-engrossing story. Portal on Steam. OKAMI HD / 大神 絶景版 on Steam. Stardew Valley on Steam. This update is a significant change for Stardew Valley... 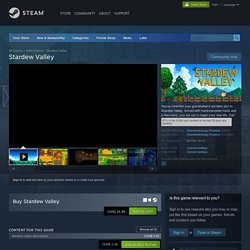 Not only does it include a good amount of new content (new items, events, etc.), but it also includes the long-awaited addition of co-op multiplayer! New Features: A traveling festival comes to town For three days in winter, a traveling festival visits Pelican Town. Unlike a normal festival, farmers can come and go as they please, and the location isn't "locked out" at any point (there's no setup). Pelican Town is different for a few days, and most of the townspeople's schedules change to reflect that. A winter mystery... and a new collection typeIn winter, farmers might encounter a strange event... which will ultimately grant them the ability to start a new, "secret" type of collection.

Help someone out in town... Signs Signs are craftable items which are available to you from the very beginning of the game. Now, a more in-depth look at how multiplayer works...Stardew Valley now supports up to 4 player co-op. FEZ on Steam. Dead Cells on Steam. About This Game Roguelite? Metroidvania?

Roguevania! You grew up with the roguelikes, witnessed the rise of the roguelites and even the birth of the roguelite-lites? We'd now like to present for your consideration our RogueVania, the illegitimate child of a modern Roguelite (Rogue Legacy, Binding of Isaac, Enter the Gungeon, Spelunky, etc.) and an old-school MetroidVania (Castlevania: SotN and its ilk). Hollow Knight on Steam.

About This Game Hollow Knight Expands with Free Content. 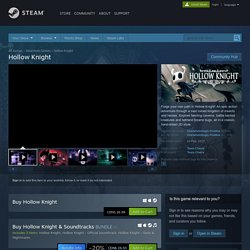 Borderlands 2 on Steam. Cities: Skylines on Steam. Reviews “The finest city builder in over a decade, Cities: Skylines's few flaws are so minor I only noticed them after hours of enjoyment.”10/10 – The Escapist“Through deep and rewarding gameplay, Colossal Order’s new simulation fills the increasingly noticeable void in the genre. 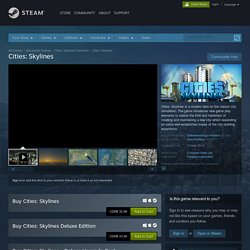 Left 4 Dead 2 on Steam. About This Game Set in the zombie apocalypse, Left 4 Dead 2 (L4D2) is the highly anticipated sequel to the award-winning Left 4 Dead, the #1 co-op game of 2008. This co-operative action horror FPS takes you and your friends through the cities, swamps and cemeteries of the Deep South, from Savannah to New Orleans across five expansive campaigns. You'll play as one of four new survivors armed with a wide and devastating array of classic and upgraded weapons. In addition to firearms, you'll also get a chance to take out some aggression on infected with a variety of carnage-creating melee weapons, from chainsaws to axes and even the deadly frying pan.

You'll be putting these weapons to the test against (or playing as in Versus) three horrific and formidable new Special Infected. Mature Content Description. Sid Meier's Civilization® V on Steam. The Flagship Turn-Based Strategy Game ReturnsBecome Ruler of the World by establishing and leading a civilization from the dawn of man into the space age: Wage war, conduct diplomacy, discover new technologies, go head-to-head with some of history’s greatest leaders and build the most powerful empire the world has ever known.INVITING PRESENTATION: Jump right in and play at your own pace with an intuitive interface that eases new players into the game.

Veterans will appreciate the depth, detail and control that are highlights of the series.BELIEVABLE WORLD: Ultra realistic graphics showcase lush landscapes for you to explore, battle over and claim as your own. COMMUNITY & MULTIPLAYER: Compete with players all over the world or locally in LAN matches, mod* the game in unprecedented ways, and install mods directly from an in-game community hub without ever leaving the game.

Team Fortress 2 sur Steam. Hellblade: Senua's Sacrifice on Steam. Water Bears VR on Steam. Trials on Tatooine on Steam. Take Your First Step into a Larger World of Star WarsThe creative minds of Lucasfilm’s ILMxLAB present a virtual reality experiment set in a galaxy far, far away…Star Wars: Trials on Tatooine. For the first time ever, wield a lightsaber as you leap into action in the most immersive Star Wars virtual reality experience ever. Be transported to the desert world of Tatooine, repair the iconic Millennium Falcon, and defend the plucky droid hero R2-D2 from incoming stormtroopers in this captivating experience set after the events of Return of the Jedi.Usage NotesTrials on Tatooine uses a single controller.

We support both 5.1 surround and headphone audio, pick the setting with the icon on the intro screen for your configuration. The Lab on Steam. Set in a pocket universe of Aperture Science, The Lab offers a wide range of ways to enjoy VR, all in one application. SlingshotBegin your career as a Calibration Trainee by recklessly destroying everything in the Aperture Storage Annex using the Core Calibration slingshot.LongbowUse your archery skills to defend your noble castle gate from a rampaging but adorable and equally noble horde of attackers.XortexAre you a bad enough dude to become a Xortex ace? Relive the golden era of gaming -- only this time, it's all around you.PostcardsVisit exotic, far-off locales from the comfort of your own head.Human Medical ScanExplore the intricate beauty of the human body through a highly detailed model created from a series of CT medical scans.Solar SystemWhy watch shows about the vast majesty of space when you can jump in and see it for yourself?

The Invisible Hours on Steam. Non-VR coming April 24th. SUPERHOT VR on Steam. 《SUPERHOT》以及《SUPERHOT VR》现已支持繁体中文和简体中文。 Subnautica on Steam. Portal Stories: VR on Steam. Keep Talking and Nobody Explodes on Steam. Google Earth VR on Steam. Duck Season on Steam. Black Hat Cooperative on Steam. About This Game “Listen carefully to my directions. Look to your right. There are two agents behind that door and they will reach you in 5 seconds. They just heard you. RUN!” Couch Co-op + Local Multiplayer Play with your friends on one computer.