Apparel Resources covers all the upcoming Garment fair national and International. You can find here latest fair and trade shows in the textile industry.

GartexTexprocess India to hold its Delhi & Mumbai editions in Dec 2020 & March 2021, respectively. The garment and textile industry has been hit drastically by COVID-19 even as the industry is working on bringing it back on track. 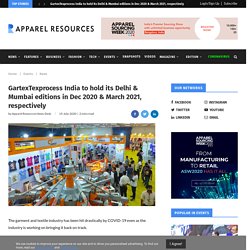 In line with the same objective to offer support for the swift revival of the industry, one of India’s most comprehensive exhibition on garment and textile manufacturing supply chain, GartexTexprocess India has announced the new dates for its Delhi and Mumbai editions. The Delhi edition of the exhibition will take place from 17 to 19 December 2020 at India Expo Mart in Greater Noida and the Mumbai edition is scheduled for 19-21 March 2021 at Bombay Exhibition Centre. The organisers of the event – MEX Exhibitions Pvt. Ltd. and Messe Frankfurt Trade Fairs India – have announced the revised dates following detailed consultations with industry stakeholders. The exhibitors, partners and industry associations also agreed that the time will help ensure that the event serves its objective of business, knowledge and tech-exchange in a better way. 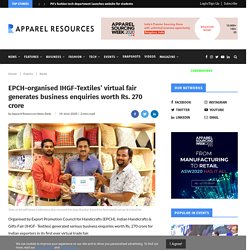 The show successfully concluded today with the visit of more than 1,500 overseas buyers, buying agents, retailers and wholesalers. It was the second virtual show by EPCH in last 1 month. Notably, EPCH is an apex organisation for the promotion of exports of handicrafts from India. Ravi K. Passi, Chairman, EPCH told that buyers from more than 78 countries visited the virtual show. Participants of home furnishing, floor coverings and textiles products who have taken part in the show have opined that this virtual platform has provided them the opportunity to survive in the business as the buyers who are unable to travel to any country have also visited the virtual fairs by sitting in the comfort of their homes or offices. 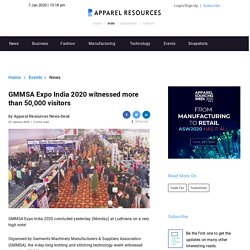 Organised by Garments Machinery Manufacturers & Suppliers Association (GMMSA), the 4-day-long knitting and stitching technology event witnessed more than 50,000 visitors. With participation from 200 exhibitors across 16 countries, the 5th edition of the event was a resounding success and received huge acclaim. There were technology bigwigs at the show! In addition to the international machine giants like Jack, Brother, Stoll and the well-known needle company Groz Beckert, many other technology pioneers too managed to leave a mark at the event with their latest technologies. Among the vast array of Chinese, Korean, Taiwanese and European machines that were on display, the ‘Make in India’ ideal stood out among its contemporaries. Notably, increasing productivity and efficiency were the key focus of new technology at the event. GMMSA Expo India 2020 concluded yesterday (Monday) at Ludhiana on a very high note!

Apparel exporters less than happy with BSM Spain. With an import of US $ 736.7 million in 2018, Spain is one of the most important markets for Indian apparel exporters. 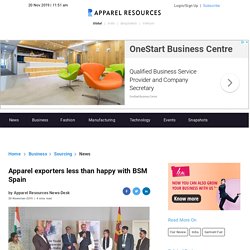 Recently AEPC organised a BSM in Spain, which saw participation from 28 Indian apparel manufacturers. As per AEPC, the event witnessed good participation from Spanish brands and retailers. With 143 visitors from 90 companies visiting the fair, including leading brands like El Corte Inglés, the event has been termed a success. The BSM was held in Chamartin, a very centrally located area, for ensuring good footfall and it was inaugurated in the presence of Sanjay Verma, Ambassador, Embassy of India in Spain; P.K. 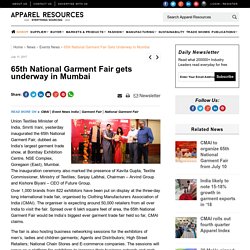 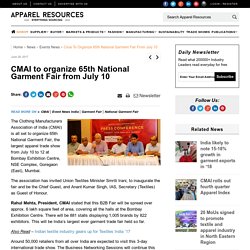 The association has invited Union Textiles Minister Smriti Irani, to inaugurate the fair and be the Chief Guest, and Anant Kumar Singh, IAS, Secretary (Textiles) as Guest of Honour. Rahul Mehta, President, CMAI stated that this B2B Fair will be spread over approx. 6 lakh square feet of area, covering all the halls at the Bombay Exhibition Centre. There will be 881 stalls displaying 1,005 brands by 822 exhibitors. Thailand to host two garment fairs in July. Share: Read what 200000+ Industry Leaders read everyday for free Image Courtesy: hktdc.com Organized by Reed Tradex and TGMA, 20th edition of GFT International Exhibition for garment and textile manufacturing industry and 5th edition of Garment Manufacturing Sourcing (GMS) Expo will take place in Bangkok, Thailand from 5-8 July, 2017. 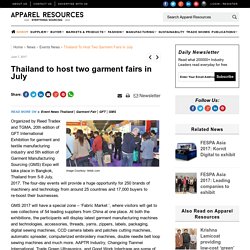 The four-day events will provide a huge opportunity for 250 brands of machinery and technology from around 25 countries and 17,000 buyers to re-boost their businesses. GMS 2017 will have a special zone – ‘Fabric Market ’, where visitors will get to see collections of 54 leading suppliers from China at one place. 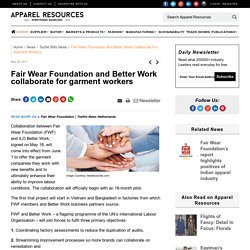 The collaboration will officially begin with an 18-month pilot. The first trial project will start in Vietnam and Bangladesh in factories from which FWF members and Better Work business partners source. FWF and Better Work – a flagship programme of the UN’s International Labour Organisation – will join forces to fulfil three primary objectives: 1. 2. 3. Garment trade fair. National Garment Fair: 64th edition kicks off in Mumbai. Share: Read what 200000+ Industry Leaders read everyday for free Image Courtesy: unitedwebnetwork.com The two-day long National Garment Fair (NGF) 2017 kick-started in Mumbai on January 30 with hopes of good business and a boost in organized apparel market. 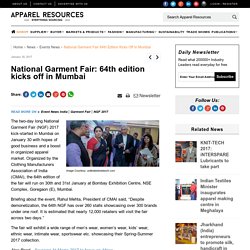 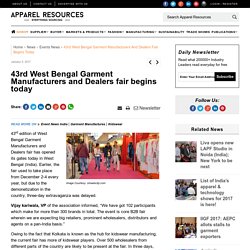 Earlier, the fair used to take place from December 2-4 every year, but due to the demonetization in the country, three-day extravaganza was delayed. Vijay kariwala, VP of the association informed, “We have got 102 participants which make for more than 300 brands in total. Owing to the fact that Kolkata is known as the hub for kidswear manufacturing, the current fair has more of kidswear players. Garment Fair Archives. IIGF 2017: AEPC allots stalls to garment exporters.