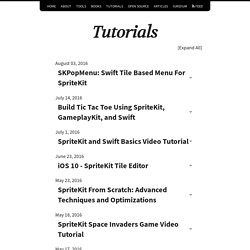 Link to Tutorial SpriteKit From Scratch: Advanced Techniques and Optimizations In the fifth and final installment of the SpriteKit From Scratch series, we look at some advanced techniques you can use to optimize your SpriteKit-based games to improve performance and user experience. How to Make a Game Like Bomberman. If you're new here, you may want to subscribe to my RSS feed or follow me on Twitter. 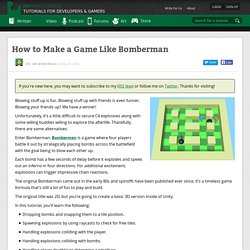 Thanks for visiting! Blowing stuff up is fun. Blowing stuff up with friends is even funner. Blowing your friends up? We have a winner! Unfortunately, it’s a little difficult to secure C4 explosives along with some willing buddies willing to explore the afterlife. Enter Bomberman. Each bomb has a few seconds of delay before it explodes and spews out an inferno in four directions. The original Bomberman came out in the early 80s and spinoffs have been published ever since. The original title was 2D, but you’re going to create a basic 3D version inside of Unity. In this tutorial, you’ll learn the following: Sprite Kit Animations and Texture Atlases in Swift. Smoky says: Only you can start this bear! 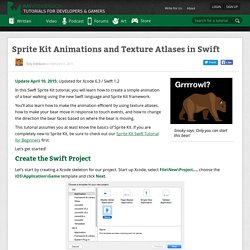 Update April 10, 2015: Updated for Xcode 6.3 / Swift 1.2 In this Swift Sprite Kit tutorial, you will learn how to create a simple animation of a bear walking using the new Swift language and Sprite Kit framework. You’ll also learn how to make the animation efficient by using texture atlases, how to make your bear move in response to touch events, and how to change the direction the bear faces based on where the bear is moving. This tutorial assumes you at least know the basics of Sprite Kit.

If you are completely new to Sprite Kit, be sure to check out our Sprite Kit Swift Tutorial for Beginners first. Let’s get started! Create the Swift Project Let’s start by creating a Xcode skeleton for our project. Enter AnimatedBearSwift for the Product Name, Swift for Language SpriteKit for Game Technology, iPad for Devices, and click Next: Choose somewhere on your drive to save the project, and click Create. Examples of the bear images you will be using. How To Size Game Art - Game Art Guppy. This post first appeared on www.vickiwenderlich.com I had a recent discussion with a developer who was creating art for a game for the first time. 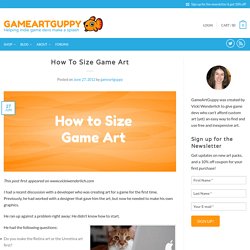 Previously, he had worked with a designer that gave him the art, but now he needed to make his own graphics. He ran up against a problem right away: He didn’t know how to start. He had the following questions: Do you make the Retina art or the Unretina art first? This article is the result of our discussion, since we felt that these notes could help other developers in the same position. If you have some of the same questions about creating game art, read on for answers!

Let’s take these questions one by one: Do you make the Retina art or the Unretina art first? The Retina art. If you are creating a universal game, however, the process is slightly altered (at least for me. How does the iPad art relate to the iPhone art in size or proportion? Except for backgrounds, we make iPhone Retina art the same size as the iPad Unretina art. Final Thoughts. GameplayKit with Swift for Beginners — Tower Defense Game — Part 1: Grid. GameplayKit is a set of tools from Apple for designing the architecture and gameplay mechanics for your iOS and OS X game. 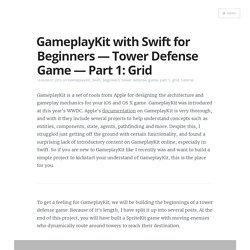 GameplayKit was introduced at this year's WWDC. Apple's documentation on GameplayKit is very thorough, and with it they include several projects to help understand concepts such as entities, components, state, agents, pathfinding and more. Despite this, I struggled just getting off the ground with certain functionality, and found a surprising lack of introductory content on GameplayKit online, especially in Swift. So if you are new to GameplayKit like I recently was and want to build a simple project to kickstart your understand of GameplayKit, this is the place for you. To get a feeling for GameplayKit, we will be building the beginnings of a tower defense game. Before we begin, please read the Entities and Components and Pathfinding sections of the documentation on GameplayKit.

Also note that GameplayKit is new in iOS 9, so you must be running Xcode 7 to use it.