Filtered extremism: how ISIS supporters use Instagram. Last week, former Secretary of State Hillary Clinton called ISIS the "most effective recruiter in the world," and pushed tech companies to help curtail the group's ability to woo recruits through online videos and social media. 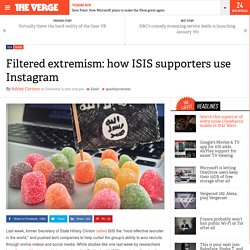 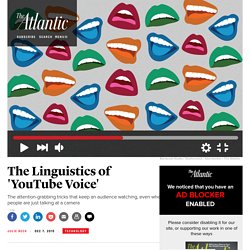 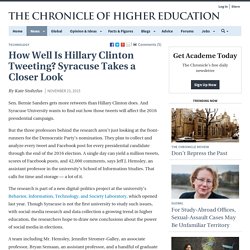 Bernie Sanders gets more retweets than Hillary Clinton does. And Syracuse University wants to find out how those tweets will affect the 2016 presidential campaign. But the three professors behind the research aren’t just looking at the front-runners for the Democratic Party’s nomination. They plan to collect and analyze every tweet and Facebook post for every presidential candidate through the end of the 2016 election. A single day can yield a million tweets, scores of Facebook posts, and 42,000 comments, says Jeff J. The research is part of a new digital-politics project at the university’s Behavior, Information, Technology, and Society Laboratory, which opened last year. A team including Mr. Each researcher has a particular focus when analyzing the messages for broader patterns, says Mr.

Video Marketing Done Right: 5 Brands That Set an Example in Creating Viral Videos. Spend five minutes on social media and it becomes readily apparent that people love to tug at each other’s heartstrings. 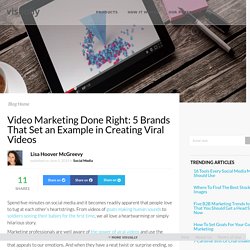 From videos of goats making human sounds to soldiers seeing their babies for the first time, we all love a heartwarming or simply hilarious story. Marketing professionals are well aware of the power of viral videos and use the same techniques to sell their brand. The best video ad campaigns tell a warm story that appeals to our emotions. Social media: The art of self-promotion : Naturejobs Blog. Guest contributor Steve Hurst If you have a question about deer or goat behaviour, then Dr Alan McElligott is your go-to guy. 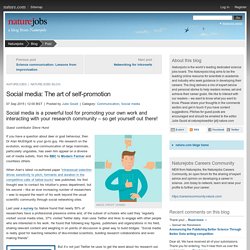 His research on the evolution, ecology and communication of large mammals, particularly ungulates, has seen him appear on a diverse set of media outlets, from the BBC to Modern Farmer and countless others. When Alan’s latest co-authored paper ‘Intrasexual selection drives sensitivity to pitch, formants and duration in the competitive calls of fallow bucks’ was published, his first thought was to contact his intuition’s press department, but his second – like an ever increasing number of researchers – was to expand the reach of his work beyond the usual scientific community through social networking sites.

Last year a survey by Nature found that nearly 50% of researchers have a professional presence online and, of the subset of scholars who said they ‘regularly visited’ social media sites, 37% visited Twitter daily. Why Your Department Needs Social Media - Advice. By Rachel Herrmann When I started running my department’s Facebook account I didn’t have a clear reason for doing so; just a vague sense that in the 21st century every department needed one. 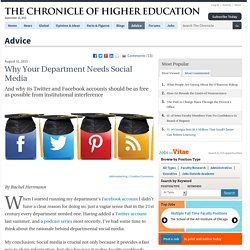 Having added a Twitter account last summer, and a podcast series most recently, I’ve had some time to think about the rationale behind departmental social media. My conclusion: Social media is crucial not only because it provides a fast way to share information, but also because it makes faculty workloads more transparent. The most significant reason social media is important is because it means I can quickly share faculty and student achievements. Social Media Image Size Cheat Sheet 2015. Electronic Portfolios a Decade into the Twenty-first Century a Decade into the 21st Century. During the last decade, campuses designing electronic portfolios have used them both in curricular and assessment contexts. 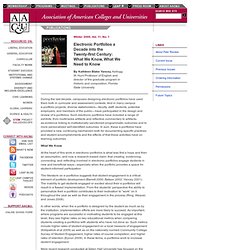 And in many campus e-portfolio projects, diverse stakeholders—faculty, staff, students, potential employers, and members of the public—have participated in the design and review of e-portfolios. Such electronic portfolios have included a range of exhibits, from multimedia artifacts and reflective commentary to artifacts-as-evidence linking to institutionally sanctioned programmatic outcomes and to more personalized self-identified outcomes. In sum, these e-portfolios have provided a new, continuing mechanism both for documenting specific practices and student accomplishments and the effects of that these activities have on learning outcomes. What We Know The literature on e-portfolios suggests that student engagement is a critical element of portfolio development (Barrett 2000; Batson 2002; Yancey 2001).