APN Live gives you latest breaking news and headlines from India. Get today’s latest updates on current news, big news, top news from every part of India and around the world. 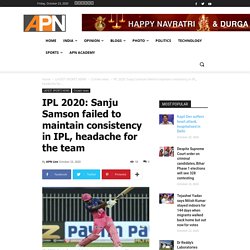 With this victory, Hyderabad still has playoff hopes. Rajasthan batted first after losing the toss in this match. During this time, there was no durable batting from Rajasthan. Samson was bowled by Jason Holder for 36 runs. If we figure out the performance, Sanju Samson has not played any big inning, except for the first two matches. Samson made a grand IPL debut, he first piled up a stormy half-century against Chennai Super Kings, and later against Kings XI Punjab.

Sanju Samson, the wicket-keeper batsman of Rajasthan Royals, failed to maintain consistency even in this IPL. In his 11 matches played so far in this season, he scored 272 runs with the help of two half-centuries. Sanju Samson is popularly known as one of the youngest Twenty20 cricket stars and IPL. Ups and downs are the part of the game, and we hope he will come back again and perform well for him and his team. PM Modi remembers Karpoori Thakur at Sasaram rally: Here's everything you should know about the iconic Bihar socialist. Karpoori Thakur, the former chief minister of Bihar, considered to be one of the makers of modern Bihar, still finds mention in every election in the state. 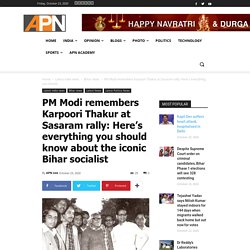 Friday was no different as Prime Minister Narendra Modi spoke about the contribution of the socialist leader while addressing a rally in Sasaram ahead of the first phase of elections on October 28. Stories of the simplicity and politeness of Thakur, who passed away in 1988, is legion. As old-timers recollect, the leader would invariably squat on the ground while campaigning for elections, a sight which is unimaginable in today’s VIP culture and the safari suit-clad policemen.

Popularly known as Jan Nayak, Thakur was born on January 24, 1924 in a family of the barber caste. He left college to join the Quit India Movement. Motion poster of Radhe Shyam released on Prabhas’s birthday, wishes pour in. The motion-poster of much-awaited movie Radhe Shyam starring Prabhas has finally been launched as he promised to unveil the first look of the film on his birthday. 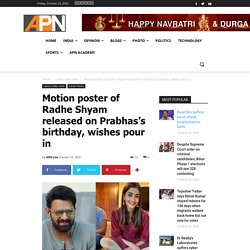 Prabhas turned 41 on Friday. Social media has been already flooded with special wishes and trending hashtags from his massive fan base, netizens and several celebrities from the Indian film fraternity. Earlier this week, the makers of the film revealed the first look of the superstar. Co-star Pooja Hegde wrote on his Instagram that the big moment has arrived. The poster of the movie shows Prabhas and Pooja Hegde getting romantic on a train which making their fans more excited to watch the film. Congress, BJP leaders fling dirt at each other in Madhya Pradesh. Campaigning for Madhya Pradesh elections is stooping to a new low with Congress and BJP leaders using derogatory remarks against female leaders. 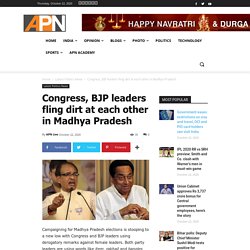 Both party leaders are using words like item, rakhail and bangles against each other as they try to woo voters. While the Election Commission issued a notice to Congress MP Chief Minister Kamal Nath on Tuesday for describing BJP’s Dabra candidate Imarti Devi as item, BJP leader and Minister for Food and Civil Supplies Bisahulal Singh, party candidate from Anuppur was booked by police for allegedly describing his Congress rival’s wife a rakhail (mistress). Anuppur Police booked him after the complaint of the Congress candidate’s wife who protested outside the police station Tuesday, seeking prompt action against the leader.

Bihar election 2020: Kanhaiya Kumar says biggest challenge for grand alliance is to stop BJP's communal agenda. Communist Party of India (CPI) leader Kanhaiya Kumar has said that the upcoming Bihar election is not a referendum for Modi government, but a test for chief minister Nitish Kumar as his leadership is under question. 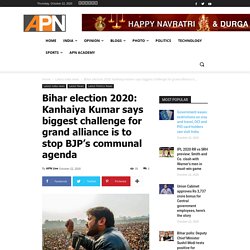 The former JNUSU president whose party is part of the Grand Alliance in Bihar said that the anger in the state is against Nitish Kumar as he has the reins of the government. In an interview with a newspaper, Kumar said that the election is not going to be one-sided as was being said earlier. He said with the polls inching closing closer, it has become clear that people are not happy with NDA government’s performance in the state. Home Minister Amit Shah celebrates his 56th birthday, on Thursday. 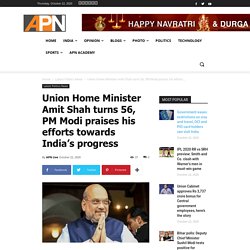 The Prime Minister extended greetings to Amit Shah on his 56th birthday and lauded his efforts towards India’s progress. BJP Bihar manifesto: Bihar will get free coronavirus vaccination, 19 lakh jobs. The BJP on Thursday became the first party, possibly in the world, to offer a free coronavirus vaccination as part of its manifesto for the Bihar Assembly election 2020. 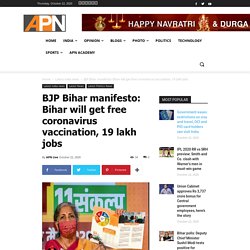 The manifesto released by Union Finance Minister Nirmala Sitharaman promised 19 lakh jobs, as opposed to the 10-lakh jobs promise made by Rashtriya Janata Dal CM hopeful Tejashwi Yadav, though the BJP had chided Yadav for coming up with such an unrealistic figure. Delhi Court rejects Tahir Hussain bail plea, says he acted as a human weapon to fan Delhi riots. A Delhi court on Thursday dismissed three bail pleas of suspended Aam Aadmi Party councilor Tahir Hussain in connection with cases related to the north-east Delhi riots that erupted in February this year. 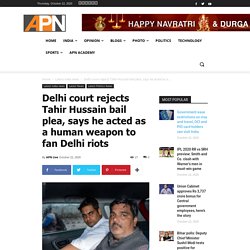 Dismissing the bail request, the court said AAP councillor act as a key player in planning, instigating and fanning the violence in north east Delhi. The court also observed that the accused was in north east Delhi at the time of eruption of communal riots. Bihar polls: Deputy Chief Minister Sushil Modi tests positive for coronavirus. Senior BJP leader and Bihar Deputy CM Sushil Kumar Modi on Thursday announced via a tweet that he has tested positive for coronavirus and admitted to All-India Institute of Medical Sciences in Patna. 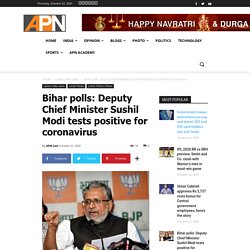 Modi’s declaration of contracting coronavirus comes amid a high-decibel campaign of the three-phase assembly polls in Bihar that is less than a week away. Sushil Modi tweeted that all parameters perfectly normal but admitted to AIIMS Patna for better monitoring. CT scan of lungs is normal. The Deputy CM assured the party workers that he would be back soon for campaigning ahead of the upcoming Bihar Assembly polls. Sushil Modi is the second BJP leader from Bihar to contract the virus in the last two days. Sushil Modi is one of the most prominent leaders of BJP from Bihar while Shahnawaz Hussain is the star campaigner of the party. Centre announces Rs 3,737 crore bonus for govt employees. Central Government announces Rs 3,737 crore bonus for over 30 lakh government employees. 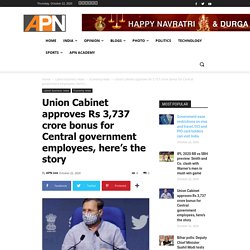 Union Minister said that the total financial implication of this bonus will be Rs 3,737 crore, and it will be given in a single installment through direct benefit transfer before Vijaydashami. As an effort to encourage spending during the festive season, the Centre on Wednesday decided to give Rs 3,737 crore as bonus to 30.67 lakh non-gazetted central government employees. The Government decided to provide both productivity and non-productivity linked bonuses for 2019-2020 after the completion of the Union Cabinet meeting.

IPL 2020 RR vs SRH preview: Smith and Co. clash with Warner ‘s men in must-win game. In a must-win game, Rajasthan Royals and Sunrisers Hyderabad will square off against each other in an Indian Premier League match on Thursday at Dubai International Cricket Stadium. Both the teams are languishing in the bottom half of the table and another defeat will almost end their chances of making it to the playoffs of the tournament. Rajasthan will be entering the game on the back of a comprehensive victory against Chennai Super Kings. Jos Buttler’s presence in the team has strengthened the side and the Englishman will be expected to continue with the form in the crucial game.

Government ease restrictions on visa and travel, OCI and POI card holders can visit India. In a move to boost air travel, the government on Thursday announced that Overseas Citizen of India (OCI) and Persons of Indian Origin (PIO) card holders can visit India for any purpose, except for tourism. The government has eased the restrictions imposed in view of coronavirus pandemic and restored the validity of all the existing visas, except electronic visa, tourist visa and medical visa nearly after eight months after the nationwide lockdown.

The government had suspended all the visas and restricted travel to contain the spread of the disease both outside and inside the country. The Home Ministry said the OCI and PIO card holders can also now enter India by water and air routes through authorized airports and seaport immigration check posts. The Ministry of Home Affairs statement said this includes flights operated under Vande Bharat Mission, Air Transport Bubble arrangements or by any non-scheduled commercial flights as allowed by the Ministry of Civil Aviation. IPL 2020: Delhi Capitals on top, Chennai Super Kings down in the dump. The Indian Premier League 2020 pointstable is heating up after Kings XI Punjab’s scored victories against top three sides of IPL 2020 Delhi Capitals, Mumbai Indians and Royal Challengers Bangalore. Kings XI Punjab on Tuesday managed to defeat table-topper Delhi Capitals by five wickets to move on the fifth position in the IPL 2020 pointstable.

Delhi Capitals continue to lead the IPL 2020 pointstable with 14 points from 10 games. Despite the five wicket defeat from Punjab, Capitals are sitting comfortably on the top spot. The defending champion Mumbai Indians is on the second spot with 12 points from nine games. After Punjab, Rajasthan government to introduce bill against Centre’s farm laws. After Punjab Chief Minister Amarinder Singh introduced four new bills to counter Centre’s contentious farm laws, the latest to join the bandwagon is Rajasthan Chief Minister Ashok Gehlot. Rajasthan CM on Tuesday termed the new laws as anti-farmer and announced that the government will bring the new bills against the Centre’s controversial farm lawsThe announcement came hours after the Punjab assembly unanimously passed four bills and moved a resolution against the Union government’s farm laws.

Rajasthan CM Ashok Gehlot tweeted that INC under the leadership of Smt Sonia Gandhi ji and Rahul Gandhi ji stands resolutely with our annadatas and will continue to oppose the anti-farmer laws passed by NDA Govt. Today Congress Govt in Punjab has passed Bills against these laws and Rajasthan will follow suit soon.

INC under the leadership of Smt #SoniaGandhi ji & #RahulGandhi ji stands resolutely with our annadatas (अन्नदाता) and will continue to oppose the anti-farmer laws passed by NDA Govt. Hathras case: AMU doctor who questioned Uttar Pradesh Police version on forensic report told to go. A doctor at Aligarh Muslim University’s Jawaharlal Nehru Medical College who had spoken to media and questioned Uttar Pradesh police’s version of the Hathras rape case has been told by the hospital that his services are not required any longer.

Dr Azeem Malik had said that the FSL (forensic science laboratory) report, which stated no sperms were found in the sample, held no value as the sample was collected after a delay of 11 days. His statement contradicted Additional Director General (Law and Order), Prashant Kumar’s statement, who had said that absence of the semen in the sample indicated that no rape took place. Apart from Dr Malik, another doctor at the hospital Dr Obaid Haque has also been issued a similar latter by the hospital. The latter had attested medico-legal case report of the 19-year-old victim. Madhya Pradesh minister Usha Thakur says all terrorists are raised in madrasas, sparks controversy. Senior Bharatiya Janata Party leader Eknath Khadse quits party, set to join NCP on Friday.