Why I Stopped Talking About Racial Reconciliation and Started Talking About White Supremacy. Recently, people have asked me, “Why isn’t talking about white privilege enough, why white supremacy?” 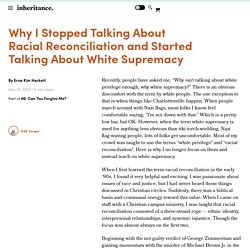 There is an obvious discomfort with the term by white people. The one exception to that is when things like Charlottesville happen. When people march around with Nazi flags, most folks I know feel comfortable saying, “I’m not down with that.” Which is a pretty low bar, but OK. However, when the term white supremacy is used for anything less obvious than tiki torch-wielding, Nazi flag-waving people, lots of folks get uncomfortable. When I first learned the term racial reconciliation in the early ‘90s, I found it very helpful and exciting.

I’m Doomsday Prepping for the End of Democracy. To hear more audio stories from publishers like The New York Times, download Audm for iPhone or Android. 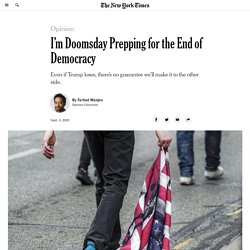 My wife, Helen, and I got into a quarrel the other day about how to plan for America’s bleak future. Our family needs to replace an aging car, but I’ve been hesitant, wary of making any new financial commitments as the nation accelerates into the teeth of political chaos or cataclysm. What if, after the election, we need to make a run for it? Why squander spare cash on a new car? Helen thinks I’m being alarmist — that I’m LARPing “The Handmaid’s Tale,” nursing some revolutionary fantasy of escape from Gilead. As an immigrant who escaped to America from apartheid-era South Africa, I feel that I’ve cultivated a sharper appreciation for political trouble. Armed political skirmishes are erupting on the streets, and scholars are tracking a rise in violence and instability as the election draws near. There’s also this: Helen skipped the Republican convention.

American fascism reaches a tipping point with Kenosha killings and Trump's RNC. In the final week of August, the United States saw its biggest deterioration in societal norms and steps towards outright fascism since President Donald Trump came to office four years ago under a mantle of barely veiled authoritarianism. 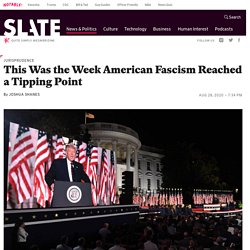 The troubling developments of the past week are almost too many to count. On Tuesday, 17-year old Kyle Rittenhouse allegedly crossed state lines with his automatic rifle and murdered two demonstrators at a protest of another horrific police shooting of a Black man. Local police did not arrest Rittenhouse or other armed white men—who went to Kenosha following the “call to arms” of a group calling itself the Kenosha Guard—for violating curfew, or even as suspects in the immediate aftermath of a murder. Instead, officers supplied them with water, thanked them for coming, and allowed Rittenhouse to walk away after allegedly murdering two men and seriously wounding a third. This was just one of many such sins of this convention.

Join Slate Plus Join. Andrew Sullivan: Is There Still Room for Debate? Photo: Tasos Katopodis/Getty Images In the last couple of weeks, as the purges of alleged racists have intensified in every sphere, and as so many corporations, associations, and all manner of civic institutions have openly pledged allegiance to anti-racism, with all the workshops, books, and lectures that come with it, I’m reminded of a Václav Havel essay, “The Power of the Powerless.” 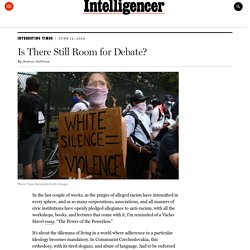 It’s about the dilemma of living in a world where adherence to a particular ideology becomes mandatory. In Communist Czechoslovakia, this orthodoxy, with its tired slogans, and abuse of language, had to be enforced brutally by the state, its spies, and its informers. In America, of course, with the First Amendment, this is impossible. But perhaps for that very reason, Americans have always been good at policing uniformity by and among themselves.

It sees America as in its essence not about freedom but oppression. This view of the world certainly has “moral clarity.” And yet this crude hyperbole remains. Toolkit. President Trump, Clint Eastwood & Gentility. Genteel Republicans such as Clint Eastwood should accept the tradeoff of the president’s style for his record of conservative victories. 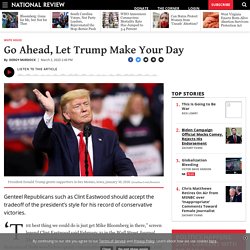 ‘The best thing we could do is just get Mike Bloomberg in there,” screen legend Clint Eastwood said February 21 in the Wall Street Journal. The actor and director’s comment raised eyebrows, especially coming from one of Hollywood’s few openly conservative luminaries. Eastwood, 89, told interviewer Tunku Varadarajan that he likes “certain things that Trump’s done” but wishes the president behaved “in a more genteel way, without tweeting and calling people names.” How sad that such a prominent and normally sensible figure on the Right opposes Donald Trump, not on policy differences, but because the president does not mirror Mr. Rogers. Yes, Trump should use Twitter more selectively; he need not react to everything under the sun. Political gentility sounds lovely, but it should be a two-way street. Senate Acquits Donald Trump Volume 0% The Demoralizing of the GOP (and America)

Or possibly the reverse The Republican party is morally sick. 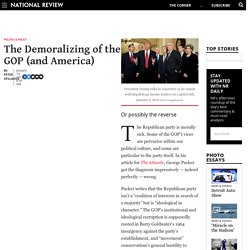 Some of the GOP’s vices are pervasive within our political culture, and some are particular to the party itself. In his article for The Atlantic, George Packer got the diagnosis impressively — indeed perfectly — wrong. Packer writes that the Republican party isn’t a “coalition of interests in search of a majority” but is “ideological in character.” The GOP’s institutional and ideological corruption is supposedly rooted in Barry Goldwater’s 1964 insurgency against the party’s establishment, and “movement” conservatism’s general hostility to established journalistic, academic, and political elites. Some of Packer’s charges are standard partisan mewling that one would expect from a Democratic consultant. Packer might respond that blocking one Supreme Court nominee is much worse than blocking a slew of lower-court nominations.

Packer does strike upon one useful mechanism for distinguishing personal and institutional corruption.