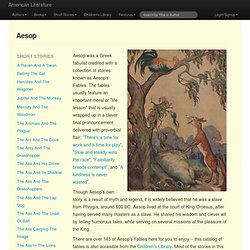 The fables usually feature an important moral or "life lesson" that is usually wrapped up in a clever final pronouncement delivered with proverbial flair; "There's a time for work and a time for play", "Slow and steady wins the race", "Familiarity breeds contempt", and "A kindness is never wasted".

Though Aesop's own story is a result of myth and legend, it is widely believed that he was a slave from Phrygia, around 600 BC. Aesop lived at the court of King Croesus, after having served many masters as a slave. He shared his wisdom and clever wit by telling humorous tales, while serving on several missions at the pleasure of the King. There are over 145 of Aesop's Fables here for you to enjoy -- this catalog of fables is also accesible from the Children's Library. We hope you take the time to share Aesop's Fables with your children and grandchildren or favorite nieces and nephews. Enjoy! The Lottery, by Shirley Jackson. Sarah, Plain and Tall. Autumn in Verse. To poets, autumn often symbolizes change, maturity, wisdom, or the harvest. 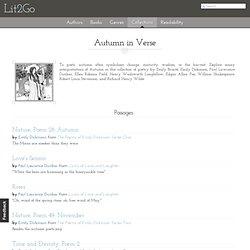 Explore many interpretations of Autumn in this collection of poetry by Emily Brontë, Emily Dickinson, Paul Lawrence Dunbar, Ellen Robena Field, Henry Wadsworth Longfellow, Edgar Allan Poe, William Shakespeare, Robert Louis Stevenson, and Richard Henry Wilde. Passages Nature, Poem 28: Autumn by Emily Dickinson from The Poems of Emily Dickinson: Series One The Morns are meeker than they were Love's Season by Paul Laurence Dunbar from Lyrics of Love and Laughter "When the bees are humming in the honeysuckle vine" Roses. The Cat That Walked By Himself, Kipling. Short Story Collection.

The Little Match Girl by Hans Christian Andersen. Most terribly cold it was; it snowed, and was nearly quite dark, and evening-- the last evening of the year. 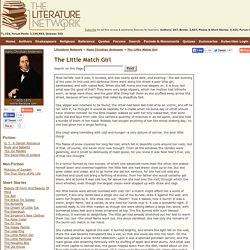 In this cold and darkness there went along the street a poor little girl, bareheaded, and with naked feet. When she left home she had slippers on, it is true; but what was the good of that? They were very large slippers, which her mother had hitherto worn; so large were they; and the poor little thing lost them as she scuffled away across the street, because of two carriages that rolled by dreadfully fast. One slipper was nowhere to be found; the other had been laid hold of by an urchin, and off he ran with it; he thought it would do capitally for a cradle when he some day or other should have children himself. So the little maiden walked on with her tiny naked feet, that were quite red and blue from cold.

She crept along trembling with cold and hunger--a very picture of sorrow, the poor little thing! Her little hands were almost numbed with cold. "Someone is just dead! " "Seventh Grade" by Gary Soto. Classic Short Stories. This is a listing of the stories by author with mention of the books that the stories were taken from or mention of the person who so graciously supplied the story to Classic Short Stories. 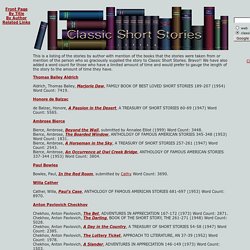 Bravo!! We have also added a word count for those who have a limited amount of time and would prefer to gauge the length of the story to the amount of time they have. Thomas Bailey Aldrich. The Ransom Of Red Chief by O Henry. IT LOOKED like a good thing: but wait till I tell you. 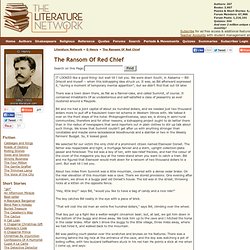 We were down South, in Alabama -- Bill Driscoll and myself -- when this kidnapping idea struck us. It was, as Bill afterward expressed it, "during a moment of temporary mental apparition"; but we didn't find that out till later. There was a town down there, as flat as a flannel-cake, and called Summit, of course. It contained inhabitants Of as undeleterious and self-satisfied a class of peasantry as ever clustered around a Maypole. Bill and me had a joint capital of about six hundred dollars, and we needed just two thousand dollars more to pull off a fraudulent town-lot scheme in Western Illinois with. We selected for our victim the only child of a prominent citizen named Ebenezer Dorset.

Seventh Grade Language Skill Builders - Online Stories. "The Fan Club" by Rona Maynard. There was a ripple of dry, humorless laughter—almost, Laura thought, like the sound of a rattlesnake. 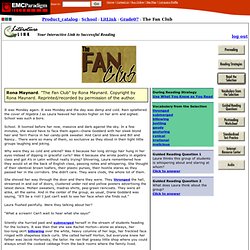 Rachel stood before the class now, her face red, her heavy arms piled with boxes. Diane Goddard tossed back her head and winked at Steve. “Well, well, don’t we have lots of things to show,” said Miss Merrill. “But aren’t you going to put those boxes down, Rachel? No, no, not there!” “Man, that kid’s dumb,” Steve muttered, and his voice could be clearly heard all through the room.

With a brisk rattle, Miss Merrill’s pen tapped the desk for silence. Rachel’s slow smile twitched at the corners. “Hurry and pick them up,” said Miss Merrill sharply. Rachel crouched on her knees and began very clumsily to gather her scattered treasures. “My—my speech is on shells.” A cold and stony silence had settled upon the room.