I am a supercool person love music and games

Must know, free assets for Unity3d game developers. Hi guys, this time I want to list a few of the assets and libraries that I've implemented in our latest game called "Endless Machina" that will be released in the Iphone, Ipad and Android smartphones really soon. 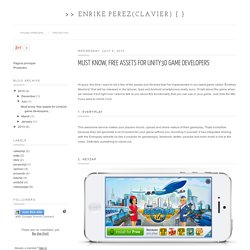 I'll talk about the game when we release it but right now I want to talk to you about this functionality that you can use in your game. Just click the title if you want to check it out. 1. Everyplay This awesome service makes your players record, upload and share videos of their gameplay. 2. It's usual to have a version of the game that runs with ads. 3. Definitely a must have!. 4. Of course. Conclusion Theire a lot more libraries that I could write about but these 4 are the top because are unity ready for easy integration and they offer an excelent service perfect for your games. 5 must have free unity3d Plugins/Assets - Ezelia. Unity3D is an awesome game engine, and it’s available for free for indie developers. it also has a huge asset store where you can find almost everything, most of the plugins are paid, but some of them are available for free. and bellow is a list of some of the best free Unity3D plugins. 1 – Unity-chan!

Model This anime style model is good for prototyping a game, it includes ready to use 74 animations, poses and emotions! This model is subject to a licence, please read it before use. Download Unity-ChanDownload Unity-Chan 2 – UMA – Unity Multipurpose Avatar This is an Open Source Avatar creation kit sponsored by Unity, it make humanoid characters creation very easy throght Unity Editor. With the UMA Humanoid DNA system you got 46 tweakable values to adjust anything from height to ear rotation, giving you virtually infinite amount of customization options. The KISS Grammar Site. This Itch of Writing: But can you teach Creative Writing? I get asked this amazingly often, considering that no one ever asks if you can teach the doing of other arts, but, just as I took ages to get on to that other old chestnut, "What is literary fiction? 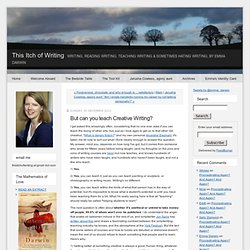 " and my own personal Ancestral Elephant, it's taken me till now to sort out what I think clearly enough to answer the question. My answer, mind you, depends on how long I've got, but it comes from someone who wrote for fifteen years before being taught, (and my thoughts on the pros and cons of writing courses are here) but now teaches, and knows hundreds of writers who have been taught, and hundreds who haven't been taught, and not a few who teach: 1) Yes. 2) Yes, you can teach it, just as you can teach painting or sculpture, or choreography or writing music. How to Use Commonly Misused Words. Steps Method 1 of 17: "Affect" and "Effect" 1Use “effect” as instructed. 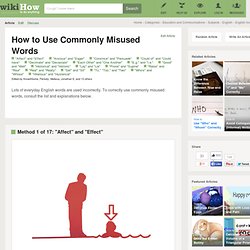 "Effect" is a noun referring to something that happens as a result of something else. E.g., "The antibiotic had little effect on the illness. ""Effect" is also a verb meaning to bring something about. 2Use “affect” as instructed.The verb "affect" means to change something in some way. Method 2 of 17: "Anxious" and "Eager" 1Use "anxious” as instructed.When followed by a gerund (the "–ing" verb form), anxiousness refers to anxiety, not pleasant feelings such as enthusiasm or excitement. 2Use “eager” as instructed.Eagerness conveys enthusiasm and is followed with an infinitive.Ex. Winston Churchill's Way With Words. Hide captionWinston Churchill wrote every word of his many speeches — he said he'd spend an hour working on a single minute of a speech. Above, he is shown speaking during the 1945 election campaign. Express/Getty Images Winston Churchill is best remembered as the British prime minister whose speeches rallied a nation under a relentless Nazi onslaught in World War II.

But few people know that he won the Nobel Prize in Literature — in part for his mastery of speechmaking. hide captionThough he went on to win the Nobel Prize in Literature, Churchill didn't always excel in school. Courtesy of Churchill Archives Centre, Cambridge Now, a new exhibition at the Morgan Library in New York City, Churchill: The Power of Words, holds a megaphone to Churchill's extraordinary oratory. On May 13, 1940, three days after Germany invaded France, Churchill gave his first speech as prime minister to the House of Commons, a speech that was later broadcast to the public. The citation, Kiely says, is wonderful. Paragraphs and Topic Sentences. A paragraph is a series of sentences that are organized and coherent, and are all related to a single topic. 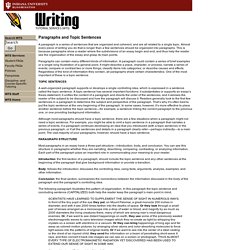 Almost every piece of writing you do that is longer than a few sentences should be organized into paragraphs. This is because paragraphs show a reader where the subdivisions of an essay begin and end, and thus help the reader see the organization of the essay and grasp its main points. Historyproject.ucdavis. World History in Context. Biography in Context. Richard the Lionheart.