Edible Slime Recipe {Kool-aid Slime} Have you been hesitant to make slime for your kids in worry that they might sneak a taste? 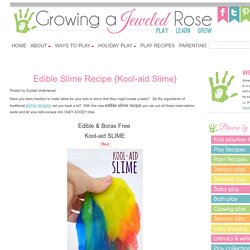 Do the ingredients of traditional slime recipes set you back a bit? With this new edible slime recipe you can put all those reservations aside and let your kids escape into OoEY GOOEY bliss. Edible & Borax Free Kool-aid SLIME For all the best Kid Activities As soon as I saw this new slime recipe from Blog Me Mom I nearly raced to the store. Sticky Sand Dough. 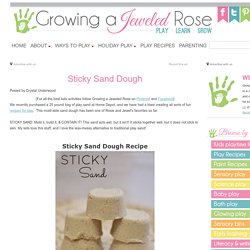 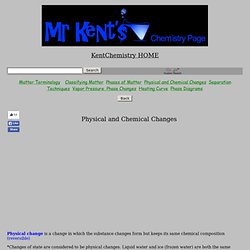 *Changes of state are considered to be physical changes. Liquid water and ice (frozen water) are both the same substance, water. Chemical vs Physical.pdf. Walkalong Glider Goes Electric. Big Mouth Tumblewing: Make and Fly. How to make a boomerang! Paper Cup Air Cannon. DIY Credit Card Catapult. I get envelopes in my junk mail all the time–you know the ones you can’t rip in half because they have a fake credit card inside? 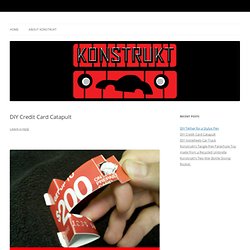 Well, being Mr. Konstrukt, I decided to use the free credit card and make an awesome catapult! This project is so easy, yet so fun. Now go Konstrukt! Materials: Credit Card Wad of Paper Tools: Scissors Happy catapulting! Mentos Diet Coke Geyser. This activity is probably best done outside in the middle of an abandoned field, or better yet, on a huge lawn. 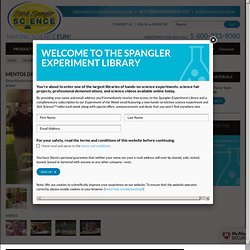 Carefully open the bottle of soda. Position the bottle on the ground so that it will not tip over. Unwrap the whole roll of Mentos. The goal is to drop all of the Mentos into the bottle of soda at the same time (which is trickier than it looks). One method for doing this is to roll a piece of paper into a tube just big enough to hold the loose Mentos. The Geyser Tube Variation You’ll need a 2-liter bottle of diet soda (diet doesn’t make a sticky mess) and an outdoor location for your geyser. Here's the question of the day... As you probably know, soda pop is basically sugar (or diet sweetener), flavoring, water, and preservatives. Slide 1 - introduction_ppt.pdf. Typesoftrussessmall.gif (GIF Image, 525 × 1227 pixels) - Scaled (56%) Image Result for. Beam. Beam bridges A beam or "girder" bridge is the simplest kind of bridge. 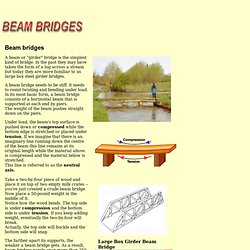 In the past they may have taken the form of a log across a stream but today they are more familiar to us large box steel girder bridges. A beam bridge needs to be stiff. It needs to resist twisting and bending under load. In its most basic form, a beam bridge consists of a horizontal beam that is supported at each end by piers. Under load, the beam's top surface is pushed down or compressed while the bottom edge is stretched or placed under tension.

Microsoft PowerPoint - ASCE Bridge Presentation 2012 [Compatibility Mode] - ASCE Bridge Presentation 2012.pdf. BUILDING BIG: Bridge Basics. There are more than half a million bridges in the United States, and you rely on them every day to cross obstacles like streams, valleys, and railroad tracks. But do you know how they work? Or why some bridges are curved while others are straight? Engineers must consider many things -- like the distance to be spanned and the types of materials available -- before determining the size, shape, and overall look of a bridge. Since ancient times, engineers have designed three major types of bridges to withstand all forces of nature. Microsoft PowerPoint - Academies Bridges 14Mar10 - Senior-bridges-student-handout.pdf. Types of Bridges. As of July 1, 2013 ThinkQuest has been discontinued. We would like to thank everyone for being a part of the ThinkQuest global community: Students - For your limitless creativity and innovation, which inspires us all. 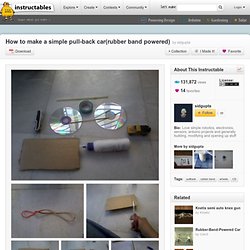 THINGS YOU NEED *rubber band *kebab skewer *straw *cardboard *2 old CD's *a toy car *glue,scissors,compass,tape,pen. WHAT TO DO 1.Cut out four cardboard squares and keep them aside. 2.take the straw and cut out 2 small pieces. 3.Tape/glue these pieces to the piece of cardboard. (this joint has to strong) 4.put glue around the hole in the CD and stick one cardboard square on it.tape it to make it stronger.Do the same on the other side of the same CD.Do the same on the other CD. 5.Mark the center of the CD on the cardboard(stuck to the center of the CD) and using a compass make a small hole on both the cardboard pieces on the sides of the CD. Lesson_plan20a.pdf. Toys from Trash. Make It and Play With It… - sparklab-divingsparky.pdf. Handout_03.pdf. Short but sweet. In every job that's to be done there is an element of fun The most useful designs for children to make are ones that can be made very quickly with no tools and no materials. 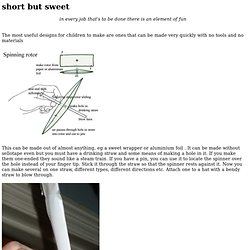 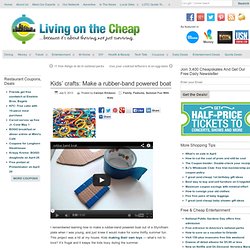 This project was a hit at my house. Kids making their own toys — what’s not to love? It’s frugal and it keeps the kids busy during the summer. The supplies are simple. You’ll need a rubber band, scissors, marker, straight edge and some type of material that will float and can be cut with scissors.