Founded in 2000 by 2 scientists, AOptix has been transforming wireless communications for the past 14 years. Technologies that were originally used for deep space exploration and military defense applications have been built upon and transformed to advance ultra-high capacity wireless technologies. 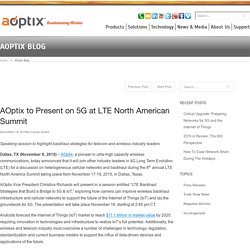 AOptix Vice President Christina Richards will present in a session entitled “LTE Backhaul Strategies that Build a Bridge to 5G & IoT,” exploring how carriers can improve wireless backhaul infrastructure and cellular networks to support the future of the Internet of Things (IoT) and lay the groundwork for 5G. The presentation will take place November 18, starting at 2:45 pm CT.

To learn more about AOptix, visit www.aoptix.com or stop by their booth #60b. For more information about the 8th Annual LTE North America visit. The role of mobile backhaul in facilitating smarter cities. As the scheduled 2020 implementation of 5G looms ever closer, the infrastructure of cities around the world is becoming smarter and more dependent on mobile technology. 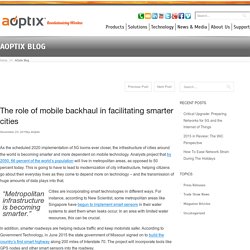 Analysts project that by 2050, 66 percent of the world’s population will live in metropolitan areas, as opposed to 50 percent today. This is going to have to lead to modernization of city infrastructure, helping citizens go about their everyday lives as they come to depend more on technology – and the transmission of huge amounts of data plays into that. “Metropolitan infrastructure is becoming smarter.” Cities are incorporating smart technologies in different ways. For instance, according to New Scientist, some metropolitan areas like Singapore have begun to implement smart sensors in their water systems to alert them when leaks occur.

In addition, smarter roadways are helping reduce traffic and keep motorists safer. The role of mobile backhaul The question is: How can all of this data be effectively transmitted? The role of mobile backhaul in facilitating smarter cities. Critical Upgrade: Preparing Networks for 5G and the Internet of Things. 2015 in Review: The WiC Perspective. The current state of 4G and LTE backhaul in Latin America. As more countries join the ranks of the mobile broadband elite and more people adopt smartphone technology for use in their everyday lives, different markets are starting to emerge as big players in the mobile backhaul space. 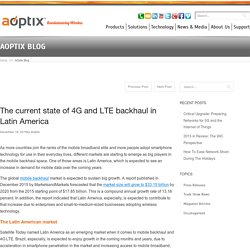 One of those areas is Latin America, which is expected to see an increase in demand for mobile data over the coming years. The global mobile backhaul market is expected to sustain big growth. A report published in December 2015 by MarketsandMarkets forecasted that the market size will grow to $33.15 billion by 2020 from the 2015 starting point of $17.85 billion. This is a compound annual growth rate of 13.18 percent. Dark Fiber Alternative and Fiber Path Diversity Technology. The Challenge: Ensuring two separate, secure, and completely redundant data paths is a must-have for a robust business continuity plan. 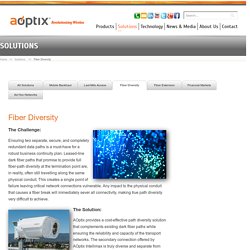 Leased-line dark fiber paths that promise to provide full fiber-path diversity at the termination point are, in reality, often still travelling along the same physical conduit. This creates a single point of failure leaving critical network connections vulnerable. Any impact to the physical conduit that causes a fiber break will immediately sever all connectivity, making true path diversity very difficult to achieve. The Solution: Fiber Network Extension, Replacement, and Alternative Solutions. The Challenge: Fiber access continues to roll out to cities and towns worldwide, often replacing aging copper infrastructure, while other times creating connectivity to locations that have never previously enjoyed high-speed access. 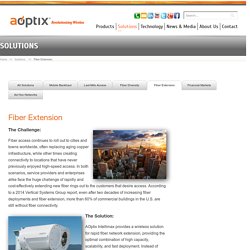 In both scenarios, service providers and enterprises alike face the huge challenge of rapidly and cost-effectively extending new fiber rings out to the customers that desire access. According to a 2014 Vertical Systems Group report, even after two decades of increasing fiber deployments and fiber extension, more than 60% of commercial buildings in the U.S. are still without fiber connectivity. The Solution: AOptix Intellimax provides a wireless solution for rapid fiber network extension, providing the optimal combination of high capacity, scalability, and fast deployment.

High Capacity Network Solutions. The Challenge: Demand for wireless backhaul capacity to support the growth of mobile data networks continues to skyrocket, and this unrelenting thirst for bandwidth only shows signs of accelerating. 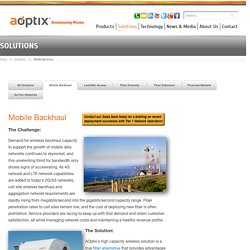 As 4G network and LTE network capabilities are added to today’s 2G/3G networks, cell site wireless backhaul and aggregation network requirements are rapidly rising from megabits/second into the gigabits/second capacity range. Fiber penetration rates to cell sites remain low, and the cost of deploying new fiber is often prohibitive. Service providers are racing to keep up with that demand and retain customer satisfaction, all while managing network costs and maintaining a healthy revenue profile. The Solution: Last-Mile Wireless and Enterprise Access Solutions from AOptix. The Challenge: Enterprise IT architectures are rapidly shifting towards data-center and cloud-based services, driving the need for high bandwidth WAN connectivity for enterprises. 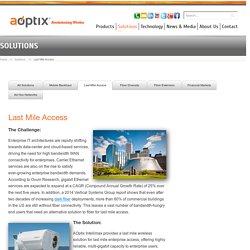 Carrier Ethernet services are also on the rise to satisfy ever-growing enterprise bandwidth demands. According to Ovum Research, gigabit Ethernet services are expected to expand at a CAGR (Compound Annual Growth Rate) of 25% over the next five years. In addition, a 2014 Vertical Systems Group report shows that even after two decades of increasing dark fiber deployments, more than 60% of commercial buildings in the US are still without fiber connectivity.