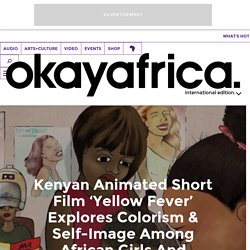 The short film, which served as Mukii’s thesis project at London’s Royal College of Art, is a captivating blend of live-action, stop-motion, spoken word, and vibrant hand-drawn animation that explores the effects of Eurocentric beauty ideals, as disseminated by mainstream media and advertising, on African women. With a runtime of just under seven minutes, Mukii’s film highlights the dissatisfaction that some darker skinned women have with their complexions and the often harmful measures taken in their quest for a lighter skin tone, most notably through the use of skin bleaching products (known in Kenya as mkorogo).

The award-winning filmmaker shared her motivation behind the animated short saying, “I am interested in the concept of skin and race, and what they imply; in the ideas and theories sown into our flesh that change with the arc of time. Watch ‘Yellow Fever’ below. H/T Shadow & Act. Women In Patriarchal Societies. 7 key issues in African feminist thought. Firstly, it is important to say that when it comes to theory, it’s more accurate to speak of African feminisms than of one almighty ‘African feminism’. 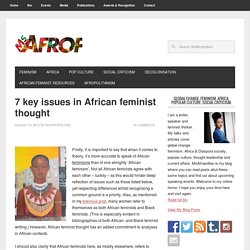 Not all African feminists agree with each other – luckily – as this would hinder deep reflection of issues such as those listed below, yet respecting differences whilst recognising a common ground is a priority. Also, as mentioned in my previous post, many women refer to themselves as both African feminists and Black feminists. TEDxBerlinSalon. Nigerian feminist and political leader. Chen-Women-Employment-Africa. Gender Equality map. Mina Salami- feminist blogger. Listed by ELLE Magazine as one of “12 women changing the world“, Minna Salami is a Nigerian-Finnish writer and commentator, and the founder of MsAfropolitan, a multiple award-winning feminist blog which has several millions of visits. 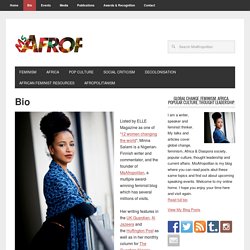 Her writing features in the UK Guardian, Al Jazeera and the Huffington Post as well as in her monthly column for The Guardian Nigeria. She is a member of Duke University’s Global Educator Network as well as the Guardian Africa Network and Guardian Books Network. Minna sits on the board of UK Charity For Books’ Sake and UK think tank, Signifier UK. Minna is a frequent guest speaker at universities around the world including Duke University, Georgetown University, University of the West Indies and Hong Kong Baptist University, where she holds an Honorary Fellow in Writing.

She is a commentator on the BBC, Deutsche Welle, TV Ontario and SVT, Sweden. The Land of No Men: Inside Kenya's Women-Only Village. Chimamanda Ngozi Adichie. Africa: Where black is not really beautiful. South Africa is marketed to the world as Mandela's rainbow nation, where everyone is proud of their race and heritage. 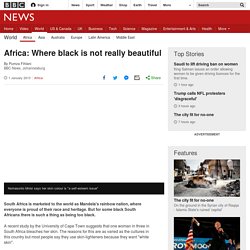 But for some black South Africans there is such a thing as being too black. A recent study by the University of Cape Town suggests that one woman in three in South Africa bleaches her skin. The reasons for this are as varied as the cultures in this country but most people say they use skin-lighteners because they want "white skin". Abena Busia. Professor Contact Information Email: busia@rci.rutgers.edu Tel: 848-932-8420 Office: RDJC 207 Education. 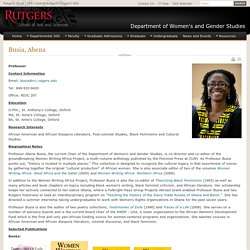 Mapping child marriage in West Africa - New Ford Foundation study. Why Some Women Choose to Get Circumcised. I recently had a conversation that challenged what I thought I knew about the controversial ritual known as “female genital cutting,” or, more commonly, "female genital mutilation. 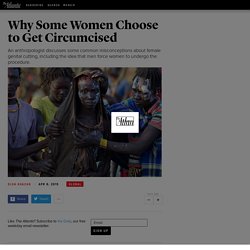 " FGC, as it is abbreviated, involves an elder or other community member slicing off all or part of a woman’s clitoris and labia as part of a ceremony that is often conducted around the time that the woman reaches puberty. Many international groups are concerned about FGC, which is practiced extensively in parts of Africa and the Middle East and is linked to infections, infertility, and childbirth complications. Organizations such as the United Nations have campaigned against the practice, calling for its abolition as a matter of global health and human rights. But despite a decades-old movement against it, FGC rates in some countries haven't budged. Ama Ata Aidoo on feminism in Africa - BBC HARDtalk. Report: Addressing the Challenge of Women’s Health in Africa. Contact us Report: Addressing the Challenge of Women’s Health in Africa Report of the Commission on Women’s Health in the African Region. 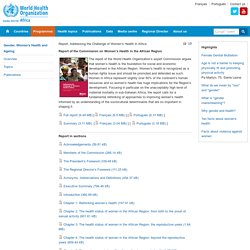 Chibok girls released from boko haram. Bring Back Our Girls. No Girl Left Behind – Education in Africa. By Claudia Costin, Senior Director for Education at the World Bank, Silvia Montoya, Director of the UNESCO Institute for Statistics and Karen Mundy, Chief Technical Officer at the Global Partnership for Education. 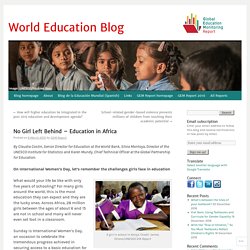 On International Women’s Day, let’s remember the challenges girls face in education A girl in school in Kenya.