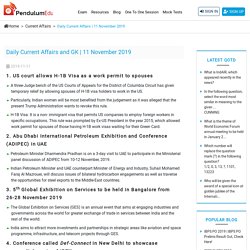 US court allows H-1B Visa as a work permit to spouses A three-Judge bench of the US Courts of Appeals for the District of Columbia Circuit has given temporary relief by allowing spouses of H-1B visa holders to work in the US. Particularly, Indian women will be most benefited from the judgement as it was alleged that the present Trump Administration wants to revoke this rule. H-1B Visa: It is a non- immigrant visa that permits US companies to employ foreign workers in specific occupations. This rule was prompted by Ex-US President in the year 2015, which allowed work permit for spouses of those having H-1B work visas waiting for their Green Card. 2.

Petroleum Minister Dharmendra Pradhan is on a 3-day visit to UAE to participate in the Ministerial panel discussion of ADIPEC from 10-12 November, 2019. 3. 5th Global Exhibition on Services to be held in Bangalore from 26-28 November 2019 4. 5. 50th annual meet of World Economic Forum in Davos, Switzerland in January 2020 6. 7. 8. 9. 10. 1. Daily Current Affairs. Daily Current Affairs.

Daily Current Affairs. 1. 11th BRICS summit going to be held in Brasilia, Brazil Prime Minister Narendra Modi will be on a 2-day visit to Brazil for the 11th BRICS Summit from 13-15 November. 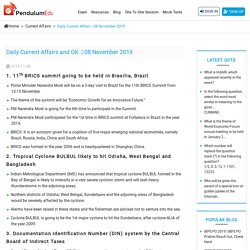 The theme of the summit will be "Economic Growth for an Innovative Future.” PM Narendra Modi is going for the 6th time to participate in the Summit. PM Narendra Modi participated for the 1st time in BRICS summit at Fortaleza in Brazil in the year 2014. BRICS: It is an acronym given for a coalition of five major emerging national economies, namely Brazil, Russia, India, China and South Africa. 2. Indian Metrological Department (IMD) has announced that tropical cyclone BULBUL formed in the Bay of Bengal is likely to intensify in a very severe cyclonic storm and will lash heavy thunderstorms in the adjoining areas. 3. 4. 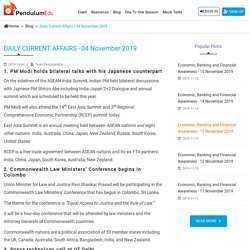 Union Minister for Law and Justice Ravi Shankar Prasad will be participating in the Commonwealth Law Ministers’ Conference that has begun in Colombo, Sri Lanka. CURRENT AFFAIRS 11-11-2019 - CURRENT AFFAIRS DUNIYA. US court allows H-1B Visa as a work permit to spouses. 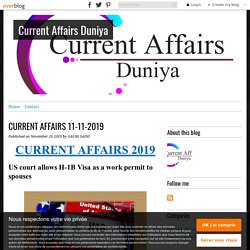 CURRENT AFFAIRS 11-11-2019 - CURRENT AFFAIRS AAJ TAK. Conference called Def-Connect in New Delhi to showcase accomplishments of iDEX The Defence Ministries of India is going to organise “Def-Connect” in New Delhi, which will be showcasing the achievements of the Innovations for Defence Excellence (iDEX) initiative. 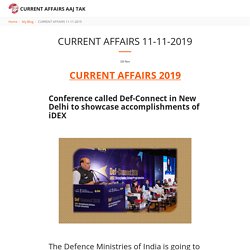 The motive to organise such conference is to gather all the stakeholders of the iDex ecosystem, Ministry of defence, iDEX selected startups, Partner Incubators, Defence Innovation Organisation, Nodal agencies (Indian Army, Navy, Airforce), Defence Research and Development Organisation and Defence Public Sector Undertakings and Indian Ordnance Factories and complete major activities including the launch of iDEX Portal and Defence India Startup Challenge (DISC)-III. For the event, Indian Defence Minister Rajnath Singh has been invited as the chief guest for the inauguration. Former chief election commissioner TN Seshan passes away Assamese version of the book titled “Courts of India: Past to Present” released by CJI Ranjan Gogoi.

CURRENT AFFAIRS 10-11-2019 - CURRENT AFFAIRS DUNIYA. SC Verdict: disputed land is given for construction of Ram Temple The Supreme Court of India has announced the verdict on the old ongoing Ayodhya Ram Mandir and Babri Masjid land dispute case on 9th November 2019 and people around the nation have encouragingly welcomed the judgment. 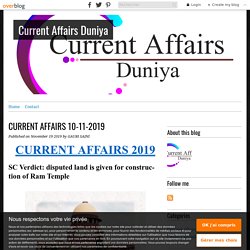 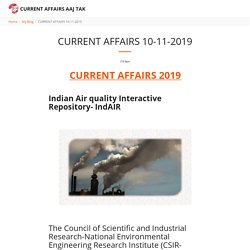 The repository is set to document all the studies related to Air Quality in the last 60 years and consists of a total 262 studies concerning the nation’s capital, Delhi-NCR. India Justice Report 2019 Recently India Justice Report 2019 has been released by Tata Trusts with the collaboration with the Center of Social Justice, Common Cause, the Tata Institute of Social Science (TISS). According to the report, Uttar Pradesh has been reported the worst in delivering Justice to its people, which is followed by Bihar, Jharkhand, and Uttrakhand. 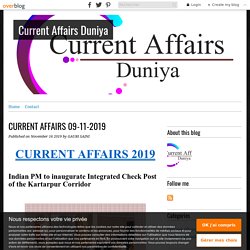 While addressing the gathering in Gurdaspur, he said that the opening of the Kartarpur Corridor would bring double happiness to the pilgrims as it will be easy for them to pay their gratitude toward Guru Nanak Dev Ji on the 550th Birth Anniversary. Also, an exhibition was conducted at New Delhi showcasing the miniature paintings of “Guru Nanak Dev Ji Ki Janamsakhi” that displayed 100 paintings depicting Guru Nanak Dev Ji’s life. Keep yourself updated with the latest news on BANKING NEWS Decline in Maternal Mortality Rate (MMR) in India by 8 points in one year SC to announce verdict on Ayodhya Babri Masjid case today. 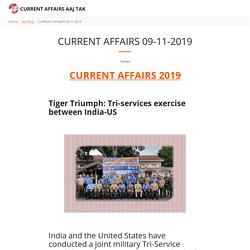 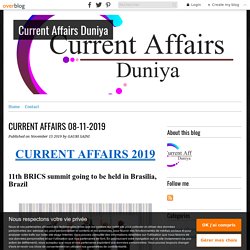 BRICS is an acronym given to the coalition of five major developing economies : Brazil, Russia, India, China and South Africa and was formed in the year 2006 having its headquarters in Shanghai, China. Indian Prime Minister Narendra Modi is going to participate in the BRICS Summit for the 6th time along with Russian President Vladimir Putin, Chinese President Xi Jinping and Brazilian President Jair Bolsonaro. This time the theme for the BRICS summit has been decided to be 'Economic Growth for an Innovative Future' , as the five nations accounts for 50% of the world's Economic Growth and will be organized from 13th to 15th November 2019. Keep yourself updated with the latest news on BANKING NEWS Tropical Cyclone BULBUL likely to hit Odisha, West Bengal and Bangladesh.

CURRENT AFFAIRS 07-11-2019 - CURRENT AFFAIRS DUNIYA. 11th edition of Bal Sangam to be organized by National School of Drama (NSD) National School of Drama (NSD) is going to organize the 11th edition of Bal Sangam from 9th November 2019. The event will be focusing on the folk and traditional art forms that will be performed by the students themselves. The event is planned for four days showcasing enthralling folk and traditional performing arts and folk theatre. The Director of NSD, Suresh Sharma gave a briefing about the event to the media and said the event would bring 12 states including Odisha, Assam, Rajasthan, Punjab, and Gujarat together to participate in the event and total 3 Folk Theaters and 12 folk presentations are going to be put up by the students of these states.

He also revealed that the event would be having Magic Shows, street plays, folk Dance, martial arts and various types of art and craft workshops. CURRENT AFFAIRS 08-11-2019 - CURRENT AFFAIRS AAJ TAK. 15 Nov Iran ditched 2015 nuclear deal framework and resumed Uranium Enrichment Recently Iran has drawn out from the 2015 Nuclear deal frame work. The Framework was signed amoung Iran and the European Union and P5+1 (Permanent Members of United Nations Security Council : United Kingdom, USA, Russia, France, China and Germany). According to the agreement, Iran agreed to suspend its Nuclear Programme in lieu of lifting of UN Sanctions. CURRENT AFFAIRS 02-11-19 - CURRENT AFFAIRS AAJ TAK. First-ever Indian Human Brain Atlas created by IIIT Hyderabad and others A researcher from IIT Hyderabad invented an Indian Human Brain Atlas (IBA). the researchers stated that the next step is to prepare these brains for the different age groups for the study of age-related effects on brain anatomy.

They also studied that the average brain size of Indians is smaller in height, width and volume in comparison with the eastern races. It is a big achievement for the nation as the immediate implication of this invention can be in the medical field for the neurologist to know the treatment outcomes of diseases such as dementia, Alzheimer’s disease, Parkinson’s disease, etc. Sharjah International Book Fair 2019 UAE inaugurated its 38th annual book fair on 30th October 2019. CURRENT AFFAIRS 01-11-19 - CURRENT AFFAIRS DUNIYA. Leeladhar Jagudi receives 28th Vyas Samman The famous Hindi Writer Leeladhar Jagudi was recently honored with the 28th Vyas Samman on 1st November 2019 at a function organized in New Delhi.

‘Dharma Guardian’ 2019 - bilateral joint military exercise India and Japan are over with their second edition of the annual joint military exercise named “Dharma Guardian 2019”. DETAILED INFORMATION. Institute of Banking Personnel Selection (IBPS) is an independent organization which conducts Online Banking Exams to recruit officers, clerk, and trainees for the Public Sector Banks of India. CURRENT AFFAIRS 31-10-19 - CURRENT AFFAIRS DUNIYA. National Unity Day 2019 National Unity Day is observed every year on 31st October to embark on the birth anniversary of Sardar Vallabhbhai Patel remembered as the Iron Man of India. This time the nation is celebrating his 144th Birth Anniversary and nation’s current Prime Minister Narendra Modi is going to pay his tribute at the recently structured statue, ‘The Statue of Unity’ : a colossal statue of the legendary personality of India who was an Indian Statesman and an Independence activist Sardar Vallabhbhai Patel build on his 143rd Birth Anniversary.