Chickpea Scramble Breakfast Bowls with Roasted Spring Vegetables. When I shared my tips on putting together a perfect vegan lunch bowl a few weeks ago, at least one reader asked if I might share some tips on assembling breakfast bowls, too. 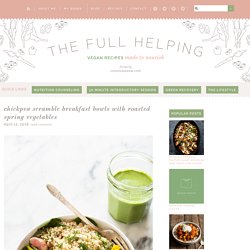 The answer is yes, and these colorful chickpea scramble breakfast bowls with roasted spring vegetables are a great place to start. I’m a big believer in the power of a hearty, well-rounded breakfast. Macronutrient balance within meals is a big part of my food philosophy overall, but I think that breakfast is especially critical because it sets the tone of the day ahead.

Imbalanced breakfasts–ones that fail to deliver enough energy-sustaining complex carbs or satiating fats and protein–can contribute to hunger or overeating as the day goes on. Breakfast has to be followed up by balanced meals and snacks, of course, but it’s a powerful opportunity to establish a nourishing pattern at the start of a day. To make assembly easy, try preparing the dressing or the roasted veggies a day or so in advance. Prep time: xo. Chickpea Flour Pizza with Asparagus. Move over cauliflower crust pizza, we’ve got chickpea flour pizza! 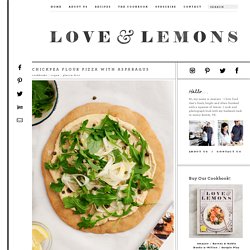 Whenever I announce that we’re having “pizza night!” Jack gets excited. But when I follow it with “gluten free pizza night! ,” he knows that he’s about to work with overly sticky dough that he can’t toss in the air. Mixed Vegetable Pakora Baked. Vegan Chickpea Chocolate Chip Cookies (Gluten-free, Nut-free) Vegan Chickpea Flour Pancakes - Besan Chilla. Chickpea Flour Pancakes/mini Omelettes with Cauliflower and Shiitake mushrooms. Glutenfree Vegan Recipe. Chickpea Flour Banana Bread (gluten free!) Apr 06 It always feels exceptional to wake up and notice banana bread sitting on the counter waiting to be devoured. 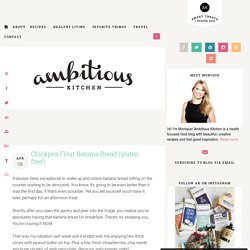 You know it’s going to be even better than it was the first day, if that’s even possible. Yet you tell yourself you’ll have it later, perhaps for an afternoon treat. Shortly after you open the pantry and peer into the fridge, you realize you’re absolutely having that banana bread for breakfast. There’s no stopping you. That was my situation last week and it ended with me enjoying two thick slices with peanut butter on top. Savory Vegan Chickpea Crêpes with Spring Vegetable Ragout Recipe on Food52. Cooking is more fun with friends. 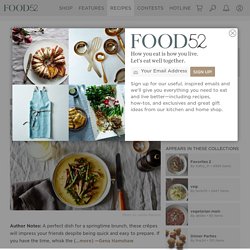 Find your friends who are already on Food52, and invite others who aren't to join. Let's GoLearn more Join Our Community Follow amazing home cooks. Collect recipes and articles. Sign Up ♥ 96 + Save ▴ If you like it, save it! Save and organize all of the stuff you love in one place. Got it! If you like something… Chickpea Flour Chocolate Chip Cookies. These huge Chickpea Flour Chocolate Chip Cookies are Chewy just like regular cookies. 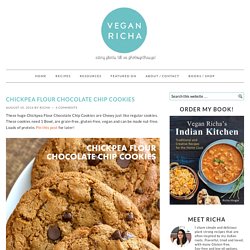 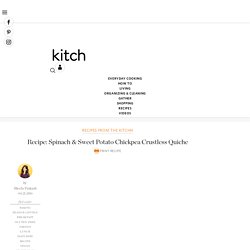 Thanks to the power of chickpeas, it is — and it's delicious. Without the milk and eggs, this sweet potato- and spinach-flecked quiche still manages to be custardy and rich — and because there is no crust to worry about it, it couldn't be easier to throw together. (Image credit: Maria Siriano) Chickpeas for the Win. Pudla (Indian Chickpea Crepes)

(Image credit: Faith Durand) When I visited cookbook author and blogger Mallika Basu at her home in London last year, I found her ready and waiting to whip up a batch of pudla, chickpea crepes with cilantro, green chili, and ginger — a quick and easy breakfast staple she makes frequently for her family. 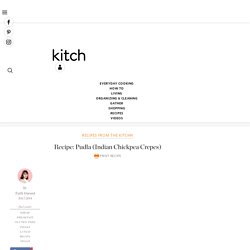 I loved how light yet satisfying these gluten-free, vegan pancakes were, soft in the middle, and with a crisp edge. I asked her for the recipe and tried a batch in my own kitchen, and here are they are for you today. Pudla, shot by Mallika in her kitchen. (Image credit: Mallika Basu) Pancake w greens. THYME & SUMAC SOCCA WITH ARUGULA, SHAVED FENNEL & FETA SALAD — SK. 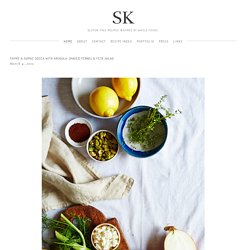 In a large mixing bowl, whisk together chickpea flour. sumac, salt and pepper. Slowly whisk in lukewarm water, making sure to eliminate all lumps. Stir in 2 tablespoons of olive oil. Add skillet or cast iron to hot oven to preheat with 2 tablespoons of olive oil to coat (for about 10 mintues or until pan is very hot). Top with sea salt, fresh pepper and more thyme then bake for 12-15 minutes or until edges are browned and firm. 1 teaspoon whole grain dijon mustard2 teaspoons lemon juice1 teaspoons red wine vinegar1 garlic clove, mincedOlive oil, about 2 tablespoons - 1/4 cup. Vegan Chickpea Flour Pancakes - Besan Chilla. Chickpea Pancakes + How to Follow a Recipe. Zucchini and Apricot Socca Tart from 'The French Market Cookbook' Zucchini and Ricotta Pancakes. Hi friends, hope you had a nice weekend? 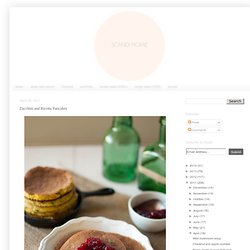 This weekend was all about R&R. Chickpea Flour Crêpes (Puda) recipe on Food52. Author Notes: Some foods, you associate them with feelings. 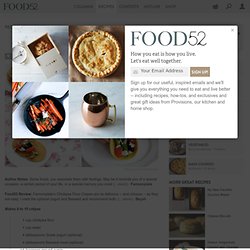 May be it reminds you of a special occasion, a certain period of your life, or a special memory you created with someone. I have many such foods and memories associated with my Grandma. One such dish -- Puda, a simple savory chickpea crêpe -- makes me nostalgic. My grandma was my hero in the kitchen. She gave me some of my first cooking lessons -- from making a cup of chai tea to baking a perfectly round roti bread. Anti-Candida, Sugar-Free, Gluten Free, Vegan Chickpea Quiche Recipe.

[Delicious as a pizza--stellar as a quiche. This recipe has many talents!] In the olden days (ie, when I was a tot), entertainers were required to have it all: Fred Astaire, Gene Kelly, Vera Ellen, Ginger Rogers, Judy Garland et al–each one of them could sing, dance and act (with varying degrees of aptitude). Today’s all-in-one players like JLo, Beyoncé, Justin Timberlake and their crew just don’t cut it the way the old-timers did, in my opinion.

If you keep in mind that the stars of eras gone by had to actually do it all at once–no lip syncing or pre-taped music! –today’s feature players simply pale in comparison. Similarly, the notion of the true, multi-talented ”Renaissance Man” seems to be in short supply these days. How to Make Socca, a Gluten-free Chickpea Flatbread. Niçoise Socca with Olives, Peppers and Anchovies. Socca Recipe. When people come to Paris, they often ask me where they can find good bouillabaisse. And when I tell them, “You can’t”, they’re always very surprised. “Well, isn’t it French?” They’ll reply. Yes, it is. But to get many of the regional specialties in France, you need to go to the region. Chickpea Socca with Mushrooms and Chard. Last night was the final evening spent with my friend Alicia who had been visiting with me for the past 2 weeks.

Between our time here in NYC and traveling down to DC for a few days, I had barely made anything in my own kitchen. Being that we were spent (both energy-wise and wallet-wise), we decided on a chill night of dinner and bingeing on Season 2 of “Orange is the New Black”. Socca has been one of my favorite discoveries of the past year. Socca (also called farinata, torta di ceci or cecina) is an unleavened chickpea flour pancake or crêpe that originates from Italy and France.

There are a number of things that are so great about it… 1. Socca Flatbread with Avocado, Cilantro Pesto and Tahini. As someone who does not always have an easy time ordering from menus when eating out, I really appreciate restaurants that make an effort to have options for everyone. One of the chain places I’ve found this to be the case is Le Pain Quotidien.

They not only have almond milk as an option at the espresso bar, but have a bunch of veggie choices and give the option to use gluten-free crackers as a base for their typically bread-oriented tartines (Belgian open-faced sandwiches).