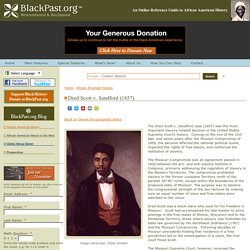 Sandford case (1857) was the most important slavery-related decision in the United States Supreme Court’s history. Coming on the eve of the Civil War, and seven years after the Missouri Compromise of 1850, the decision affected the national political scene, impacted the rights of free blacks, and reinforced the institution of slavery. The Missouri Compromise was an agreement passed in 1820 between the pro- and anti-slavery factions in Congress, primarily addressing the regulation of slavery in the Western Territories. The compromise prohibited slavery in the former Louisiana Territory north of the parallel 36°30? Dred Scott was a black slave who sued for his freedom in Missouri. 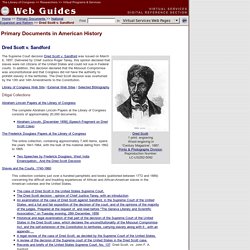 Abraham Lincoln, [December 1856] (Speech Fragment on Dred Scott Case) The Frederick Douglass Papers at the Library of Congress The online collection, containing approximately 7,400 items, spans the years 1841-1964, with the bulk of the material dating from 1862 to 1865. Slaves and the Courts, 1740-1860 This collection contains just over a hundred pamphlets and books (published between 1772 and 1889) concerning the difficult and troubling experiences of African and African-American slaves in the American colonies and the United States.

Words and Deeds in American History From Slavery to Freedom: The African-American Pamphlet Collection, 1824-1909 Chronicling America May 21, 1796 Reverdy Johnson was born in Annapolis, Maryland on May, 21, 1796. The case of Dred Scott in the United States Supreme Court. The full opinions of Chief Justice Taney and Justice Curtis, and abstracts of the opinions of the other judges; with an analysis of the points ruled, and some concluding observations. Citations are generated automatically from bibliographic data as a convenience, and may not be complete or accurate. 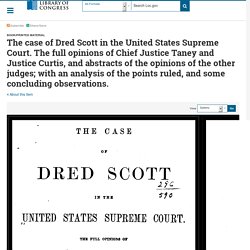 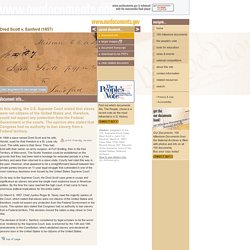 Supreme Court stated that slaves were not citizens of the United States and, therefore, could not expect any protection from the Federal Government or the courts. The opinion also stated that Congress had no authority to ban slavery from a Federal territory. In 1846 a slave named Dred Scott and his wife, Harriet, sued for their freedom in a St. Louis city court.

Dred Scott v. Sandford. The majority held that “a negro, whose ancestors were imported into [the U.S.], and sold as slaves,” whether enslaved or free, could not be an American citizen and therefore did not have standing to sue in federal court. 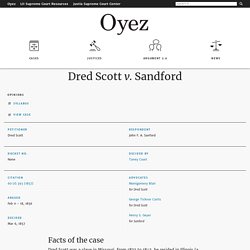 Because the Court lacked jurisdiction, Taney dismissed the case on procedural grounds. Taney further held that the Missouri Compromise of 1820 was unconstitutional and foreclose Congress from freeing slaves within Federal territories. The opinion showed deference to the Missouri courts, which held that moving to a free state did not render Scott emancipated. Finally, Taney ruled that slaves were property under the Fifth Amendment, and that any law that would deprive a slave owner of that property was unconstitutional. In dissent, Benjamin Robbins Curtis criticized Taney for addressing the claim’s substance after finding the Court lacked jurisdiction. 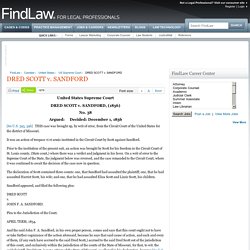