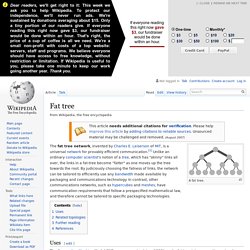 Mercury Computer Systems used a hypertree network, a variant of fat trees, in their multicomputer. From 2 to 360 compute nodes would reside in a circuit switched fat tree network, with each node having local memory that could be mapped by any other node. Each node in this heterogeneous system could be an Intel i860, a PowerPC, or a group of three SHARC DSPs. The fat tree network was particularly well suited to the FFT, which customers used for signal processing tasks like radar, sonar, medical imaging, and so on. A fat tree network is now preferred[citation needed] for the InfiniBand cluster architecture. The connectivity of the Internet is very similar to a fat tree, where the connection rates go up at higher tiers.

Home - Beacon - Confluence. Multi-Vendor Service Orchestration and Network Programmability. Multi-Vendor Service Orchestration and Network Programmability. PCEP Overview. A Path Computation Element (PCE) is an entity (component, application, or network node) that is capable of computing a network path or route based on a network graph and applying computational constraints. 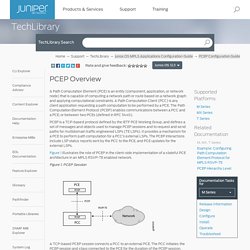 A Path Computation Client (PCC) is any client application requesting a path computation to be performed by a PCE. The Path Computation Element Protocol (PCEP) enables communications between a PCC and a PCE, or between two PCEs (defined in RFC 5440). PCEP is a TCP-based protocol defined by the IETF PCE Working Group, and defines a set of messages and objects used to manage PCEP sessions and to request and send paths for multidomain traffic engineered LSPs (TE LSPs). It provides a mechanism for a PCE to perform path computation for a PCC’s external LSPs. The PCEP interactions include LSP status reports sent by the PCC to the PCE, and PCE updates for the external LSPs. SDN Series Part Eight: Comparison Of Open Source SDN Controllers. Software Defined Networking (SDN) adds flexibility to control-plane implementation choices, allowing one to choose between points on the implementation design axis: centralized to distributed, micro-flow to aggregated-flow, reactive to proactive, virtual to physical, and fully-consistent to eventually-consistent. 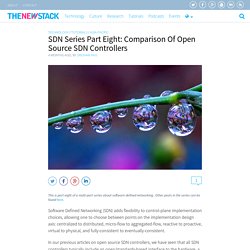 In our previous articles on open source SDN controllers, we have seen that all SDN controllers typically include an open/standards-based interface to the hardware, a network operating system, and well-defined APIs to write various network applications. We have also seen that controllers differ from each other in these three aspects.

In this article, we will provide a not-so-comprehensive comparative analysis of different open source SDN controllers. SDNControllers. Knowledge-base. Software Defined Networking: What It Is and Isn't. Few things have received more press over the last couple of years in the networking arena than software defined networking (SDN). 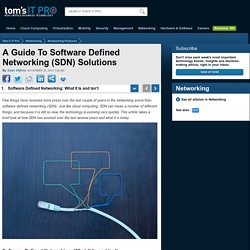 Just like cloud computing, SDN can mean a number of different things, and because it is still so new, the technology is evolving very quickly. This article takes a brief look at how SDN has evolved over the last several years and what it is today. Software Defined Networking: What It Is and Isn't The SDN movement as it currently exists is an evolution that started with a basic idea: How do we make the configuration and management of a network quicker and easier. Many large companies have gotten used to a very long provision time between an initial request and a service actually being deployed; typically in terms of days and months not minutes and hours.

Traditionally, a network device can be separated into three different planes: An example of where the data and control planes exist in a traditional network is shown on the left side of Figure 1 below. List of SDN Controller Vendors & SDN Controllers. Why Cisco is Warming to Non-ACI Data Center SDN. There are three basic ways to do software defined networking in a data center. 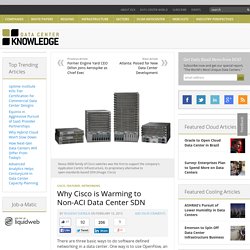 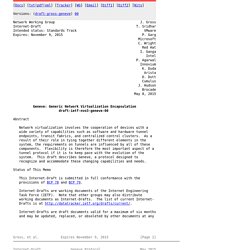 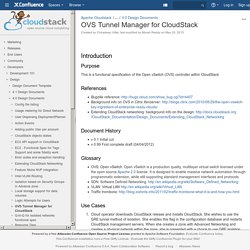 Feature Specifications Goals The goal of this feature is to broadly support all of CloudStack's virtual networking functions while removing the limitations associated with VLANs. Scaling: a maximum of 4094 VLANs per datacenter is possible. Unsupported/ToDo items Known issues Occasional packet loss / out of order delivery can occur on active connections while GRE tunnels are being created. Warehouse Scale Datacenters - Igor Kashinsky. 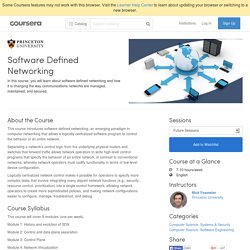 Course Syllabus Module 3: Control Plane. Wp-sdn-newnorm.pdf. CPqD/ofsoftswitch13. PacketInCommon Class Reference. Turning into Reality. List of OpenFlow Software Projects. (I am trying to keep a running list of all OpenFlow-related software projects where either the bits or the source are available online. 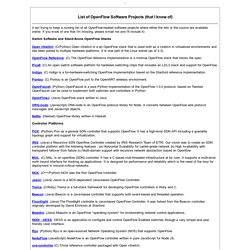 If you know of one that I'm missing, please e-mail me and I'll include it) Juniper Offers OpenFlow Source Code To Developers. Juniper Networks is jumping on the OpenFlow bandwagon, putting the OpenFlow source code in the Junos SDK. 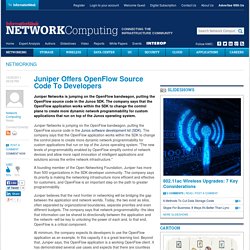 We welcome code contributions from active participants and we’ll openly share information on project status, roadmap, bugs, etc.Easy to Use- Floodlight is drop dead simple to build and run. Read through the Documentation (link)Tested and Supported – Floodlight is the core of a commercial controller product from Big Switch Networks (link) and is actively tested and improved by a community of professional developers. The Floodlight Open SDN Controller is an enterprise-class, Apache-licensed, Java-based OpenFlow Controller. It is supported by a community of developers including a number of engineers from Big Switch Networks. Clean Slate Press Release. December 2, 2008 Industry, academic engineers work side-by-side to realize wireless, infrastructure advances. STANFORD, CA â€“ Stanford University's Clean Slate Internet Design Program, a nothing-is-sacred research effort to rethink the globe's ossified communications infrastructure, today announced the formation of the Clean Slate Lab, in which professors, students, research staff and professional engineers will deploy prototypes of program ideas in research and operational networks.

Stanford created the lab with Deutsche Telekom in Germany and NEC in Japan as the founding sponsors. Clean Slate Design for the Internet. Clean Slate Press Release.

Netconf-YANG. What can SDN learn from a twenty-five year old standard? The industry regards SDN as a simple but powerful concept that will reform data networking. But the idea behind SDN is not brand-new. Twenty-five years ago, telephone networks underwent a similar revolution called "intelligent networks" (IN). IN separated service control from circuit switching and enabled fast provisioning of well known services such as call forwarding, call waiting, three-way calling, reverse charging and number portability. IN was at the top of its hype in the mid nineties and has been put to the test for decades. SDN promises to do for data networking what IN did for telephony.

A few successful applications make the business IN aimed to ease the creation of services for the telephony network. Twenty-five years on we find that only a handful of compelling services made the business case for IN. We'll see something similar happening in SDN. OPEX savings compel more than CAPEX savings Service providers now experience the same with SDN. Who follows the standard?