Design front dev. JSON: What It Is, How It Works, & How to Use It. This week I want to cover a topic that I feel has become an important part of any developer’s toolkit: the ability to load and manipulate JSON feeds from other sites via AJAX. 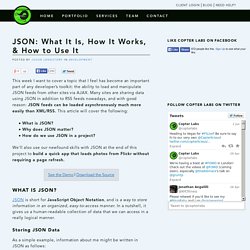 Many sites are sharing data using JSON in addition to RSS feeds nowadays, and with good reason: JSON feeds can be loaded asynchronously much more easily than XML/RSS. This article will cover the following: What is JSON? Why does JSON matter? jQuery. Jsonschema2pojo. Convert XML or JSON to Java Pojo Classes - Online. Ocsigen. Looks like HTML5 is gaining momentum. Sometimes I can’t help myself. 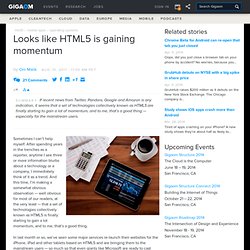 After spending years in the trenches as a reporter, anytime I see three or more information blurbs about a technology or a company, I immediately think of it as a trend. And this time, I’m making a somewhat obvious observation — well obvious for most of our readers, at the very least — that a set of technologies collectively known as HTML5 is finally starting to gain a lot momentum, and to me, that’s a good thing. In last month or so, we’ve seen some major services re-launch their websites for the iPhone, iPad and other tablets based on HTML5 and are bringing them to the mainstream users — so much so that even giants like Microsoft are ready to cast aside their own technologies in favor of HTML5. There’s Google of course, whose apps keep getting better and better. It’s clearly leading the HTML5 charge. That said, I don’t think HTML 5 and dedicated apps are mutually exclusive. iPhone HTTP Streaming with FFMpeg and an Open Source Segmenter.

With the release of the iPhone OS 3 update came the ability to do live streaming. 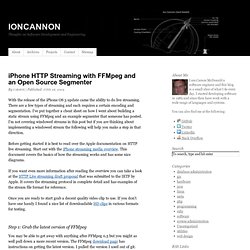 There are a few types of streaming and each requires a certain encoding and segmentation. I've put together a cheat sheet on how I went about building a static stream using FFMpeg and an example segmenter that someone has posted. I'm not covering windowed streams in this post but if you are thinking about implementing a windowed stream the following will help you make a step in that direction. Before getting started it is best to read over the Apple documentation on HTTP live streaming. Start out with the iPhone streaming media overview. HTTP Live Streaming Overview: Deploying HTTP Live Streaming. To actually deploy HTTP Live Streaming, you need to create either an HTML page for browsers or a client app to act as a receiver. 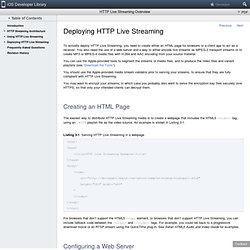 You also need the use of a web server and a way to either encode live streams as MPEG-2 transport streams or to create MP3 or MPEG-4 media files with H.264 and AAC encoding from your source material. You can use the Apple-provided tools to segment the streams or media files, and to produce the index files and variant playlists (see “Download the Tools”). You should use the Apple-provided media stream validator prior to serving your streams, to ensure that they are fully compliant with HTTP Live Streaming. You may want to encrypt your streams, in which case you probably also want to serve the encryption key files securely over HTTPS, so that only your intended clients can decrypt them. Creating an HTML Page. HTML5 video. The HTML5 specification introduced the video element for the purpose of playing videos,[1] partially replacing the object element. 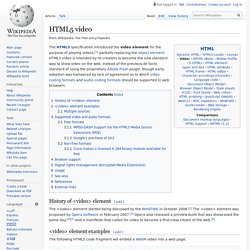 HTML5 video is intended by its creators to become the new standard way to show video on the web without plugins, instead of the previous de facto standard of using the proprietary Adobe Flash plugin, but has been hampered by lack of agreement as to which video coding formats should be supported in web browsers. History of <video> element[edit] 10 HTML5 Video Players as Alternatives to Flash Player. HTML5 new specifications for a video is for sure one of the most talked aspects in the range of many new notable HTML5 features developed for more dynamic web applications and interfaces. 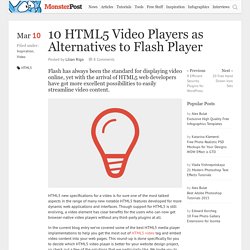 Though support for HTML5 is still evolving, a video element has clear benefits for the users who can now get browser-native video players without any third-party plugins at all. In the current blog entry we’ve covered some of the best HTML5 media player implementations to help you get the most out of HTML5 video tag and embed video content into your web pages. HTML5 Video Player - Demo. HTML5. HTML5 is a markup language used for structuring and presenting content for the World Wide Web and a core technology of the Internet. It is the fifth revision of the HTML standard (created in 1990 and standardized as HTML 4 as of 1997)[2] and, as of December 2012[update], is a candidate recommendation of the World Wide Web Consortium (W3C).[3] Its core aims have been to improve the language with support for the latest multimedia while keeping it easily readable by humans and consistently understood by computers and devices (web browsers, parsers, etc.).

HTML5 is intended to subsume not only HTML 4, but also XHTML 1 and DOM Level 2 HTML.[2] History[edit] The Web Hypertext Application Technology Working Group (WHATWG) began work on the new standard in 2004. At that time, HTML 4.01 had not been updated since 2000,[8] and the World Wide Web Consortium (W3C) was focusing future developments on XHTML 2.0. HTML5. JSON. JSON. The JSON object contains methods for parsing JavaScript Object Notation (JSON) and converting values to JSON. 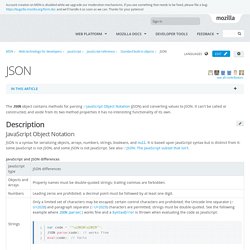 It can't be called or constructed, and aside from its two method properties it has no interesting functionality of its own. DescriptionEdit JavaScript Object Notation JSON is a syntax for serializing objects, arrays, numbers, strings, booleans, and null. JSON: What It Is, How It Works, & How to Use It. JSONLint - The JSON Validator. User wenyi. Bootstrap · The world's most popular mobile-first and responsive front-end framework. A Minimalist Python Web Framework — CherryPy 3.3.0 documentation. Tutorial — Bottle 0.13-dev documentation. This tutorial introduces you to the concepts and features of the Bottle web framework and covers basic and advanced topics alike. 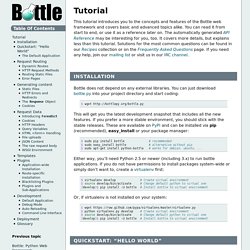 You can read it from start to end, or use it as a reference later on. The automatically generated API Reference may be interesting for you, too. It covers more details, but explains less than this tutorial. Solutions for the most common questions can be found in our Recipes collection or on the Frequently Asked Questions page. If you need any help, join our mailing list or visit us in our IRC channel. Installation Bottle does not depend on any external libraries. 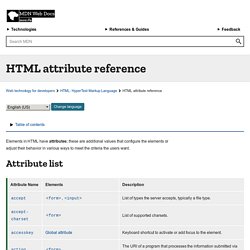 Basic elementsEdit Basic elements are the backbone of any HTML document. A Complete Guide to Flexbox. Background. 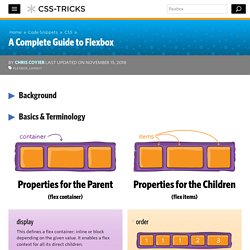 Beginner Concepts: How CSS Selectors Work. Are you new to CSS? This article is for you! Perhaps the biggest key to understanding CSS is understanding selectors. Intro to HTML and CSS. Thank you for signing up for the course! We look forward to working with you and hearing your feedback in our forums. Need help getting started? Find an answer to your question in the Udacity FAQLearn about different parts of the Classroom in Udacity Introduction. Fonts. jQuery. Bootstrap · The world's most popular mobile-first and responsive front-end framework. Udacity Nanodegree Style Guide.