Two alternative futures for MBaaS and MAM convergence. Mobile Backend as a Service (MBaaS) got it's start serving up the backend of mobile applications with maybe a basic level of security. 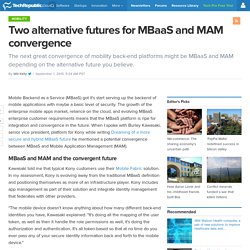 The growth of the enterprise mobile apps market, reliance on the cloud, and evolving MBaaS enterprise customer requirements means that the MBaaS platform is ripe for integration and convergence in the future. When I spoke with Burley Kawasaki, senior vice president, platform for Kony while writing Dreaming of a more secure and hybrid MBaaS future he mentioned a potential convergence between MBaaS and Mobile Application Management (MAM). MBaaS and MAM and the convergent future Kawasaki told me that typical Kony customers use their Mobile Fabric solution. In my assessment, Kony is evolving away from the traditional MBaaS definition and positioning themselves as more of an infrastructure player. "The mobile device doesn't know anything about how many different back-end identities you have, Kawasaki explained. 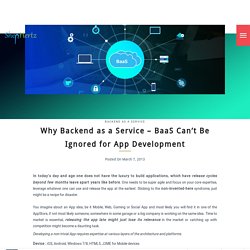 One needs to be super agile and focus on your core expertise, leverage whatever one can use and release the app at the earliest. Sticking to the non-invented-here syndrome, just might be a recipe for disaster. You imagine about an App idea, be it Mobile, Web, Gaming or Social App and most likely you will find it in one of the AppStore, if not most likely someone, somewhere in some garage or a big company is working on the same idea. 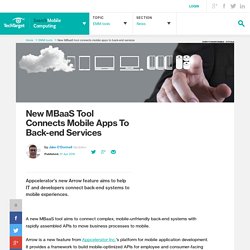 Arrow is a new feature from Appcelerator Inc.'s platform for mobile application development. It provides a framework to build mobile-optimized APIs for employee and consumer-facing applications and simplifies mobile backend as a service (MBaaS). Arrow gives IT and developers a scalable cloud service for running the new APIs. It's made up of two parts: Builder, which allows for rapid assemblage of APIs, data models and connectors; and Cloud, which runs the APIs and provides usage analysis and push notification support. What is Mobile Backend as a Service (MBaaS)? Mobile Cloud Backend as a Service Ecosystem Map – All roads lead to BaaS. I am still asked this question from time to time: “What in heaven’s name is Backend as a Service?” 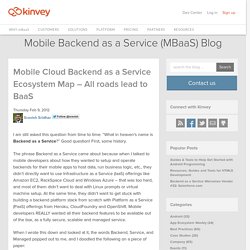 Good question! First, some history. Understanding Mobile Back End As A Service. What if you could create an entire back end for your mobile applications that was feature-complete in data synchronization, push-notification support, user management and file-handling before you even started building the mobile experience? 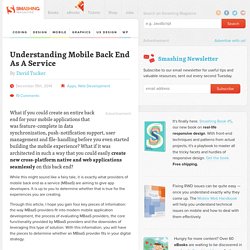 What if it was architected in such a way that you could easily create new cross-platform native and web applications seamlessly on this back end? While this might sound like a fairy tale, it is exactly what providers of mobile back end as a service (MBaaS) are aiming to give app developers. It is up to you to determine whether that is true for the experiences you are creating. Through this article, I hope you gain four key pieces of information: the way MBaaS providers fit into modern mobile application development, the process of evaluating MBaaS providers, the core functionality provided by MBaaS providers and the downsides of leveraging this type of solution. Framing The Discussion Link. [Infographic] Mapping the Tools in the Mobile Development Ecosystem. The mobile development ecosystem is a large, complicated space. 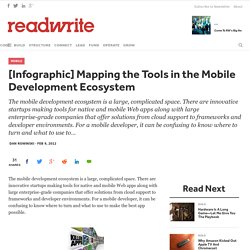 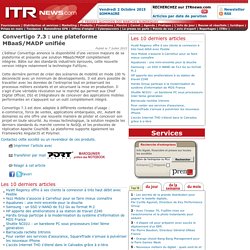 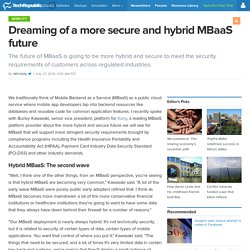 I recently spoke with Burley Kawasaki, senior vice president, platform for Kony, a leading MBaaS platform provider about the more hybrid and secure future we will see for MBaaS that will support more stringent security requirements brought by compliance programs including the Health Insurance Portability and Accountability Act (HIPAA), Payment Card Industry Data Security Standard (PCI-DSS) and other industry demands. Hybrid MBaaS: The second wave "Well, I think one of the other things, from an MBaaS perspective, you're seeing is that hybrid MBaaS are becoming very common," Kawasaki said. "A lot of the early wave MBaaS were purely public early adopters refined that. "Our MBaaS deployment is nearly always hybrid. Built.io Q&A: 'Internet of APIs' and future of MBaaS market. Built.io is a Mobile Backend-as-a-Service provider and app development platform that’s laser focused on the enterprise market. 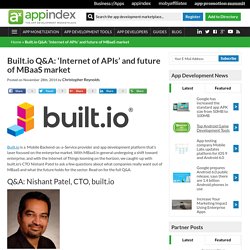 With MBaaS in general undergoing a shift toward enterprise, and with the Internet of Things looming on the horizon, we caught-up with built.io’s CTO Nishant Patel to ask a few questions about what companies really want out of MBaaS and what the future holds for the sector. Read on for the full Q&A. Built.io promotes itself as built from the ground up for enterprise. Mobile App Devs Take Note: Five MBaaS Trends Shaping the Future. If you are a mobile developer or simply involved in the mobile app market in some capacity, then you can certainly appreciate just how much the Mobile Backend as a Service (MBaaS) landscape has evolved over the past few years. 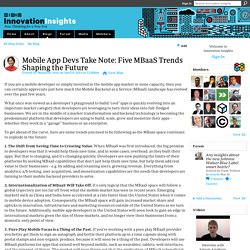 What once was viewed as a developer’s playground to build "cool" apps is quickly evolving into an important market category that developers are leveraging to turn their ideas into full-fledged businesses. We are in the middle of a market transformation and backend technology is becoming the predominant platform that developers are using to build, scale, grow and monetize their apps – whether they work in a “garage” business or an enterprise. To get ahead of the curve, here are some trends you need to be following as the MBaas space continues to explode in the future: 1.

The Shift from Saving Time to Creating Value. 2. 3. 4. 5. Are you an app developer or involved in the mobile development space? The rise of mobile backend-as-a-service: Why MBaaS is the developer's new best friend. The pro football hall of famer head coach Bill Parcells once famously said upon leaving the New England Patriots, "They want you to cook the dinner; at least they ought to let you shop for some of the groceries. " Not long ago, mobile application development wasn't much different.

Developers were the chefs of mobile app creation but hardly had a choice of the development tools they could use to build them. Developers have always wanted to be the Picassos of app creation, but have rarely been able to choose their own canvas and paints. This dilemma for developers occurred for disparate reasons. Sometimes developers’ desires for development tools diametrically opposed the operational efficiencies of the company they worked for. This caused tremendous problems. Furthermore, developers absolutely love to work on the user experience and design of an app. Why-mbaas-now-codex1194. Enterprise MBaaS Architecture in the Digital World.

Last week, Harsha Avvari, Head of Technology at Cognizant Technology Solutions and Rich Mendis, Chief Product Officer at AnyPresence joined forces to present their view of the future of enterprise architecture in the digital world. This is a summary of their web session. As the technology landscape evolves at a dramatic pace driven by cloud software services and smart device proliferation, companies are struggling to keep up with the pace of innovation and its exponential complexity.

As the post-PC era matures, new web-connected devices such as appliances, wearables, automobiles and other non-traditional channels are emerging. It is imperative for enterprises to enable their developer ecosystems with the appropriate digital infrastructure if they are to take advantage of the opportunities these new channels offer and remain relevant. The App Development ChallengesShort development cycles: Development cycles need to be shorter and more frequent in order to keep pace with expectations.

Modernizing Digital Infrastructure with MBaaS: 2015 and Beyond. MBaaS shoot-out: 5 clouds for building mobile apps. MBaaS (mobile back end as a service) is a fairly new product category that has largely supplanted MEAPs (mobile enterprise application platforms). Over the past two months, I've closely examined five MBaaS systems: AnyPresence, Appcelerator, FeedHenry, Kinvey, and Parse. In this article, I'll wrap up the series by summarizing all five systems, surveying their common ground and key differences, and drawing conclusions.