Making “Freemium” Work. Over the past decade “freemium”—a combination of “free” and “premium”—has become the dominant business model among internet start-ups and smartphone app developers. 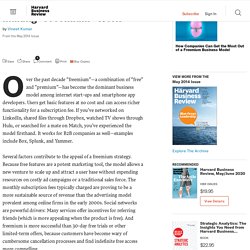 Users get basic features at no cost and can access richer functionality for a subscription fee. If you’ve networked on LinkedIn, shared files through Dropbox, watched TV shows through Hulu, or searched for a mate on Match, you’ve experienced the model firsthand. It works for B2B companies as well—examples include Box, Splunk, and Yammer. Several factors contribute to the appeal of a freemium strategy. Because free features are a potent marketing tool, the model allows a new venture to scale up and attract a user base without expending resources on costly ad campaigns or a traditional sales force. But despite its popularity and clear benefits, freemium is still poorly understood. What should be free? Recall that one of the chief purposes of freemium is to attract new users. Do customers fully understand the premium offer? How to Be an Expert in a Changing World.

December 2014 If the world were static, we could have monotonically increasing confidence in our beliefs. 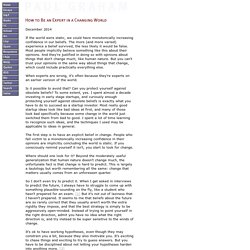 The more (and more varied) experience a belief survived, the less likely it would be false. Most people implicitly believe something like this about their opinions. Here is BuzzFeed’s first pitch deck to investors in 2008. In 2008, BuzzFeed had just five employees working in an office in New York City’s Chinatown district, and its website was attracting just 700,000 unique visitors a month. 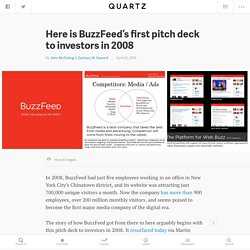 Now the company has more than 900 employees, over 200 million monthly visitors, and seems poised to become the first major media company of the digital era. The story of how BuzzFeed got from there to here arguably begins with this pitch deck to investors in 2008. It resurfaced today via Martin Nisenholtz, a former New York Times executive. Asked for comment, BuzzFeed noted that the deck has circulated before. Here is the full presentation, with some of our commentary. “It wasn’t easy raising money in the early days of BuzzFeed,” Peretti recalled in an interview last year. BuzzFeed surpassed $100 million in revenue last year, and has taken funding from high-profile venture capital funds, including Andreessen Horowitz, at a valuation close to $1 billion.

Our startup needed to grow. — Startups & Venture Capital. ….and this is what we learned. 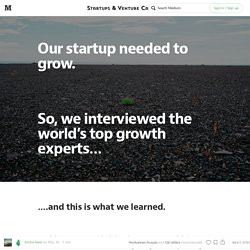 I work for a young startup that helps other startups grow and thrive (I know…almost too meta to be contained by these parentheses). We’ve spent a lot of time deep in the weeds over the past few months helping various companies and entrepreneurs to scale and organize, and a funny thing happened–we forgot to grow ourselves. We wanted to learn from the best, so we approached the top growth hackers in the industry to train our team to think like experts and super-charge our customer acquisition efforts. Some experts gave pretty controversial advice while others cited more time-tested methods. There was a fair mixture of bootstrapping and free tools with paid acquisition and powerful management systems. How to Build a Marketing Team at a Consumer Technology Company. I receive many questions about how to build marketing at technology organizations. 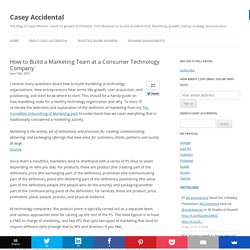 New entrepreneurs hear terms like growth, user acquisition, and positioning, and don’t know where to start. This should be a handy guide on how marketing looks for a healthy technology organization and why. To start, I’ll re-iterate the definition and explanation of the definition of marketing from my The Incredible Unbundling of Marketing post to understand how we cover everything that is traditionally considered a marketing activity. Marketing is the activity, set of institutions, and processes for creating, communicating, delivering, and exchanging offerings that have value for customers, clients, partners, and society at large.Source. What’s The Most Difficult CEO Skill? Managing Your Own Psychology. “It’s fucked up when your mind’s playin’ tricks on ya” —The Geto Boys By far the most difficult skill for me to learn as CEO was the ability to manage my own psychology. 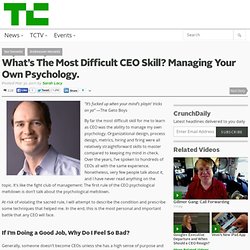 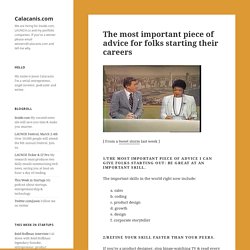 The important skills in the world right now include: a. sales b. coding c. product design d. growth e. design f. corporate storyteller. What You Can Learn from a Scorpion. The hardest thing about starting a company is that from day one you emerge as this completely vulnerable entity trying its hardest to project success, power, trajectory and inevitability while you secretly know that you’re one knock-out blow from extinction. 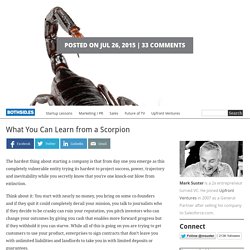 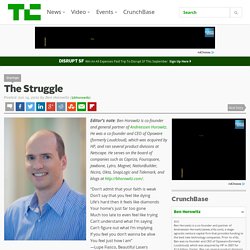 He was a co-founder and CEO of Opsware (formerly Loudcloud), which was acquired by HP, and ran several product divisions at Netscape. Google.