Self-Love Without Social Change Ain't It. Sharing is caring! 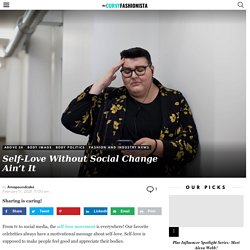 From tv to social media, the self-love movement is everywhere! Our favorite celebrities always have a motivational message about self-love. Self-love is supposed to make people feel good and appreciate their bodies. But, self-love is not sustainable without social change. It cannot exist without challenging the dominant society to uproot its beliefs about certain bodies and help create a society where fat people can thrive. It’s essential to treat fatphobia as a social justice issue. It creates a sense of weight blindness and leads people to believe that weight does not have an impact on the lives of fat people. People don’t have to love themselves to fight social injustice.

There is so much pressure to love your body but the messages are often sold to fat people that if they love themselves just a tad bit more then they would have more access in this society. There are systems that thrive off of our self-love. Why Self Love Won't Save Us With Dr Lindo Bacon. There’s no-one on the planet like my awesome friend Dr Lindo Bacon! 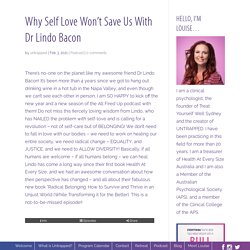 It’s been more than 4 years since we got to hang out drinking wine in a hot tub in the Napa Valley, and even though we can’t see each other in person, I am SO HAPPY to kick off the new year and a new season of the All Fired Up podcast with them! Do not miss this fiercely loving wisdom from Lindo, who has NAILED the problem with self-love and is calling for a revolution – not of self-care but of BELONGING! We don’t need to fall in love with our bodies – we need to work on healing our entire society, we need radical change – EQUALITY, and JUSTICE, and we need to ALLOW DIVERSITY! Basically, if all humans are welcome – if all humans belong – we can heal. Show Transcript LOUISE: Thank you so much for coming on the show, Lindo. 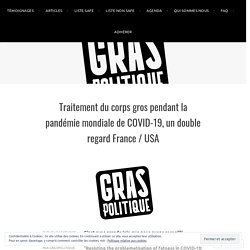 Notes [1] B. . [22] S. Body Positivity Is Excluding People; What If We Got Rid of Beauty Instead? Whether we realize it or not, most of our evaluations about other people begin and end with how they look. 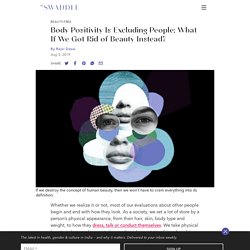 As a society, we set a lot of store by a person’s physical appearance, from their hair, skin, body type and weight, to how they dress, talk or conduct themselves. We take physical beauty in humans for granted, even though society’s unfair value of it perpetuates shame and a correcting mindset. So much do we value beauty, and the privileges it affords, even emerging movements that seek to democratize physical appearance can’t shake the hierarchy they aim to upend. From body positivity (which seeks to inculcate positive feelings in all humans regarding how they look), to body neutrality (which advocates for people to be okay with how they look, even if they can’t yet make positive associations with their bodies) — all rest on the premise that feeling beautiful is still a valuable goal. But beauty is an oppressive concept where there are never any winners.

The big fat truth : Nature News & Comment. ILLUstration by gary neil Late in the morning on 20 February, more than 200 people packed an auditorium at the Harvard School of Public Health in Boston, Massachusetts. 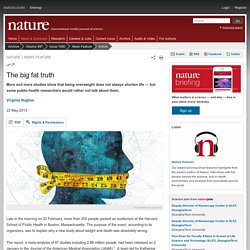 The purpose of the event, according to its organizers, was to explain why a new study about weight and death was absolutely wrong. The report, a meta-analysis of 97 studies including 2.88 million people, had been released on 2 January in the Journal of the American Medical Association (JAMA)1. A team led by Katherine Flegal, an epidemiologist at the National Center for Health Statistics in Hyattsville, Maryland, reported that people deemed 'overweight' by international standards were 6% less likely to die than were those of 'normal' weight over the same time period.

The result seemed to counter decades of advice to avoid even modest weight gain, provoking coverage in most major news outlets — and a hostile backlash from some public-health experts. Source: Childers, D.K. & Allison, D.B. The obesity paradox: Scientists now think that being overweight can protect your health. Around a dozen years ago, researchers noticed that some patients with chronic conditions such as heart disease fared better than others. 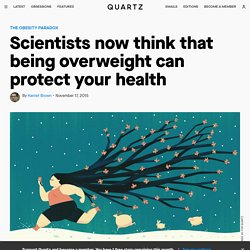 This should have been encouraging news, perhaps a clue to future treatments. Instead, researchers were baffled. Because the factor that seemed to be protecting these patients was fat: They were all overweight or mildly obese. “When health-care professionals get their first nutrition books, there’s a chapter on obesity,” says Glenn Gaesser, director of the Healthy Lifestyles Research Center at Arizona State University. “And it generally says that fat people are unhealthy and thin people are healthy.” Defending the Con Side: Obesity Paradox Does Not Exist. Obesity Paradox Does Exist.