Historical facts that will blow your mind (30 Photos. 50 Of The Most Scandalous, Weird, And Bizarre Historical Facts You Didn’t Know. Over on Reddit, someone asked people to tell the R rated historical fact they “know” that is usually left out of classroom discussion. 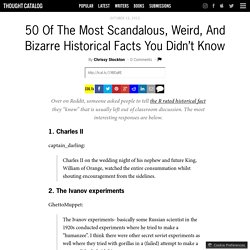 The most interesting responses are below. 1. Charles II captain_darling: Charles II on the wedding night of his nephew and future King, William of Orange, watched the entire consummation whilst shouting encouragement from the sidelines. 2. GhettoMuppet: The Ivanov experiments- basically some Russian scientist in the 1920s conducted experiments where he tried to make a “humanzee”. 3. BalalaikaMiG: Boston Corbett, the man who found and shot John Wilkes Booth, was completely insane from handling mercury as a hatter. 4. Scrimpasher: The vibrator was created to treat Hysteria because doctors were taking too long to manually masterbate women. 5. Benrawie: When the Russian Bolsheviks overthrew the provisional government and stormed the Winter Palace in 1917 their revolution was halted for a few days.

33 Shocking Facts That Will Change How You Picture History. 10 Cases of American Intervention in Latin America. Politics With the current political crisis in Honduras, American (US) foreign policy is looking to soften its historic reputation in the region by largely deferring negotiations to Latin American diplomats. 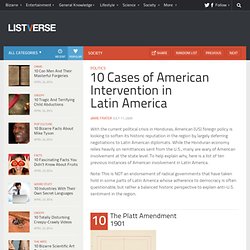 While the Honduran economy relies heavily on remittances sent from the U.S., many are wary of American involvement at the state level. To help explain why, here is a list of ten previous instances of American involvement in Latin America. Note: This is NOT an endorsement of radical governments that have taken hold in some parts of Latin America whose adherence to democracy is often questionable, but rather a balanced historic perspective to explain anti-U.S. sentiment in the region. The Platt Amendment This addition to the Army Appropriations Act, submitted by Senator Orville Pratt (R-Ohio), set the stage for US-Cuban relations in the early 20th Century.

10 Forgotten Events That Shaped The Modern World. History History is full of twists and turns that ultimately shaped the world we live in today. 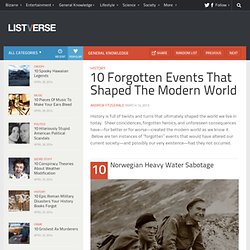 Sheer coincidences, forgotten heroics, and unforeseen consequences have—for better or for worse—created the modern world as we know it. Below are ten instances of “forgotten” events that would have altered our current society—and possibly our very existence—had they not occurred. Norwegian Heavy Water Sabotage When developing nuclear weapons, one must acquire a large quantity of “heavy water,” or Deuterium Oxide.

Despite a number of failures, saboteurs managed to destroy the German supply of heavy water in 1943. Black History Little Known Facts. Check out 124 little known facts in Black History. 1-63 | 64-124 Fact #1 As a child Muhammad Ali was refused an autograph by his boxing idol, Sugar Ray Robinson. 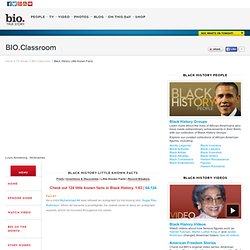 When Ali became a prizefighter, he vowed never to deny an autograph request, which he honored throughout his career. Fact #2 Muhammad Ali, the self-proclaimed "greatest [boxer] of all time," was originally named after his father, who was named after the 19th-century abolitionist and politician Cassius Marcellus Clay. Fact #3 Allensworth is the first all-black Californian township, founded and financed by African Americans. Fact #4 Jazz, an African–American musical form born out of the blues, ragtime and marching bands, originated in Louisiana during the turn of the 19th century. Fact #5 Fact #6 Before Wally Amos became famous for his "Famous Amos" chocolate chip cookies, he was a talent agent at the William Morris Agency, where he worked with the likes of the Supremes and Simon & Garfunkel. 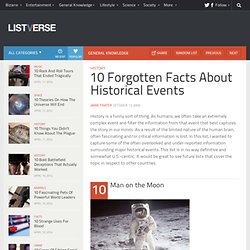 As humans, we often take an extremely complex event and filter the information from that event that best captures the story in our minds. As a result of the limited nature of the human brain, often fascinating and/or critical information is lost. In this list, I wanted to capture some of the often overlooked and under-reported information surrounding major historical events. This list is in no way definitive and somewhat U.S. While the moon landing may be the single most remembered event in the history of mankind and President John Kennedy, as the man who championed and led this accomplishment, often forgotten is Kennedy’s true motive for the daunting task. Mass suicide at Jonestown Japan’s Emperor after Hiroshima When U.S. history recalls Japan in WWII, it often only remembers the mushroom clouds that scarred Japan’s physical geography and overlooks the strong psychological moorings that were devastated after the surrender.

Jamie Frater. 15 Historical Facts You Don't Know. History We all love facts – especially historical ones and ones that are new to us. 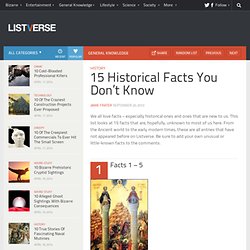 This list looks at 15 facts that are, hopefully, unknown to most of us here. From the Ancient world to the early modern times, these are all entries that have not appeared before on Listverse. Be sure to add your own unusual or little-known facts to the comments.