Linux embarqué: Mise en place et développement - Préface de Marc Palazon - Ficheux, Pierre. Using Yocto Project with BeagleBone Black. By examining the contents of the poky directory, you will notice your terminal executables, as in most of the cases while working with new technologies/packages on *nix systems. 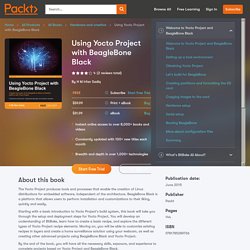 Here, we have oe-init-build-env. This is the one responsible for creating our build environment. We will source this script and pass to it our build directory as an argument, as follows: $ source oe-init-build-env build_bbb The build_bbb argument can be anything you want. First, we will encounter the following two options, which are related to each other. BB_NUMBER_THREADS ? You will find these variables twice in this file: once in the preceding form and once in the following form: #BB_NUMBER_THREADS ? We are telling BitBake about the maximum number of threads it should use for the job and the maximum of jobs run in parallel. BB_NUMBER_THREADS ? The State of Robotics – June 2020.

ROS, Ripple and reflections – In this month’s edition of The State of Robotics, we’ll tell you about the recently discovered Ripple vulnerability, the latest and greatest in robots reflecting nature, and a dash of news from the ROS universe. 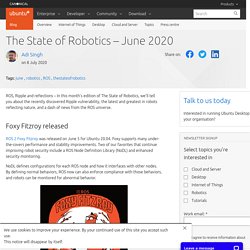 Foxy Fitzroy released ROS 2 Foxy Fitzroy was released on June 5 for Ubuntu 20.04. Foxy supports many under-the-covers performance and stability improvements. Two of our favorites that continue improving robot security include a ROS Node Definition Library (NoDL) and enhanced security monitoring. NoDL defines configurations for each ROS node and how it interfaces with other nodes. Foxy improves on security monitoring by enabling logging for DDS communications. This LTS release will be supported through May 2023. 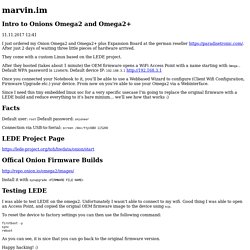 They come with a custom Linux based on the LEDE project. After they booted (takes about 1 minute) the OEM firmware opens a WiFi Access Point with a name starting with Omega-. Default WPA password is 12345678. Default device IP: 192.168.3.1 Once you connected your Notebook to it, you’ll be able to use a Webbased Wizard to configure (Client Wifi Configuration, Firmware Upgrade etc.) your device.

Since I need this tiny embedded linux soc for a very specific usecase I’m going to replace the original firmware with a LEDE build and reduce everything to it’s bare minium… we’ll see how that works :) Default user: root Default password: onioneer. Omega2 Starter Kit. Welcome to the Guide for the Onion Omega2 Starter Kit! 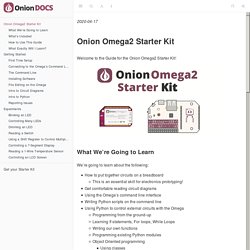 What We’re Going to Learn We’re going to learn about the following: How to put together circuits on a breadboard This is an essential skill for electronics prototyping! Omega2 – Onion. Top 10 new Linux hacker boards to watch for in 2019. The last month has seen an explosion of new Linux-based SBCs ranging from a next-gen BeagleBone AI and a Whiskey Lake based UP Xtreme to the first maker boards from Google and Nvidia. 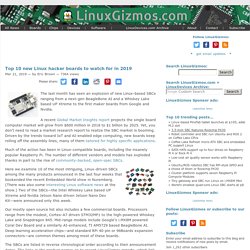 A recent Global Market Insights report projects the single board computer market will grow from $600 million in 2018 to $1 billion by 2025. Yet, you don’t need to read a market research report to realize the SBC market is booming. Driven by the trends toward IoT and AI-enabled edge computing, new boards keep rolling off the assembly lines, many of them tailored for highly specific applications. Much of the action has been in Linux-compatible boards, including the insanely popular Raspberry Pi.

The number of different vendors and models has exploded thanks in part to the rise of community-backed, open-spec SBCs. Here we examine 10 of the most intriguing, Linux-driven SBCs among the many products announced in the last four weeks that bookended the recent Embedded World show in Nuremberg. 2020 Best Single Board Computers/ Raspberry Pi Alternatives. Embedded Linux Board Comparison. Yocto Project – It's not an embedded Linux distribution – it creates a custom one for you. Building BeagleBone Systems with Yocto. Building systems for BeagleBone Black, BeagleBone Green and PocketBeagle boards using tools from the Yocto Project. 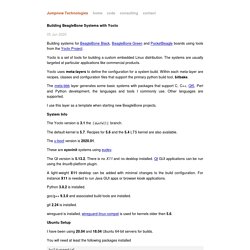 Yocto is a set of tools for building a custom embedded Linux distribution. The systems are usually targeted at particular applications like commercial products. Yocto uses meta-layers to define the configuration for a system build. Within each meta-layer are recipes, classes and configuration files that support the primary python build tool, bitbake. The meta-bbb layer generates some basic systems with packages that support C, C++, Qt5, Perl and Python development, the languages and tools I commonly use.

I use this layer as a template when starting new BeagleBone projects. System Info The Yocto version is 3.1 the [dunfell] branch. The default kernel is 5.7. The u-boot version is 2020.01. These are sysvinit systems using eudev. The Qt version is 5.13.2. - pocket. PocketBeagle is an ultra-tiny-yet-complete open-source USB-key-fob computer. 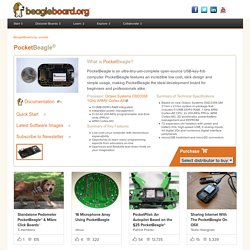