Crime, a sherlock fanfic. Disclaimer: I own my words and my ideas, but not the characters or premise, which belong to the BBC and Sir Arthur Conan Doyle. 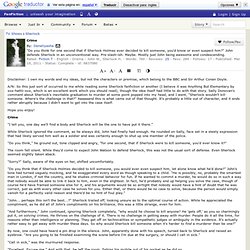 A/N: So this just sort of occurred to me while reading some Sherlock fanfiction or another (I believe it was Anything But Elementary by xox-hattii-xox, which is an excellent work which you should read), though the idea itself had little to do with that story. Sally Donovan's comment about Sherlock's inevitable graduation to murder at some point popped into my head, and I went, "Sherlock wouldn't kill someone.

Where's the challenge in that? " Aaaaaand this is what came out of that thought. It's probably a little out of character, and it ends rather abruptly because I didn't want to get into the case itself. Hope you enjoy! Crime "I tell you, one day we'll find a body and Sherlock will be the one to have put it there. " While Sherlock ignored the comment, as he always did, John had finally had enough. The room fell silent. "Sorry? " Go, a hunger games fanfic. If I told you a secret you won't tell a soul Will you hold it and keep it alive? 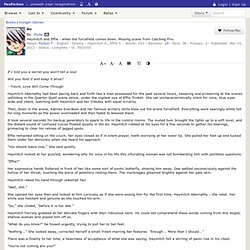 - Travis, Love Will Come Through Haymitch Abernathy had been pacing back and forth like a man possessed for the past several hours, swearing and screaming at the scenes unfolding in the Quarter Quell arena below, under the vigilant eye of Effie Trinket. She sat uncharacteristically silent for once, blue eyes wide and intent, watching both Haymitch and her tributes with equal scrutiny. Then, down in the arena, Katniss Everdeen and her famous archery skills blew out the arena forcefield. It took several seconds for backup generators to spark to life in the control rooms. Effie remained sitting on the couch, her eyes closed as if in silent prayer, teeth worrying at her lower lip. "You should leave now. " Haymitch looked at her puzzled, wondering why for once in his life this infuriating woman was not bombarding him with pointless questions. 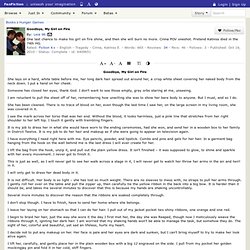 The Treacherous Tile, a series of unfortunate events fanfic. Disclaimer: I am entirely devoid of any proprietary interest in A Series of Unfortunate Events, a phrase which here means "it belongs to Daniel Handler and HarperCollins Children's Books". 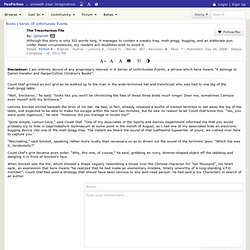 Count Olaf grinned an evil grin as he walked up to the man in the wide-brimmed hat and trenchcoat who was tied to one leg of the mah-jongg table. "Well, Snickeroo," he said, "looks like you won't be chronicling the fate of those three brats much longer. Dear me, sometimes I amaze even myself with my brilliance. " Lemony Snicket smiled beneath the brim of his hat. He had, in fact, already released a boxful of trained termites to eat away the leg of the table, and expected to be able to make his escape within the next two minutes, but he saw no reason to let Count Olaf know this. "Quite simple, Lemon-Juice," said Count Olaf. "Fascinating," said Snicket, speaking rather more loudly than necessary so as to drown out the sound of the termites' jaws. Count Olaf's grin became even wider. Percy Jackson IS Aquaman!, a percy jackson and the olympians fanfic. This Winter . . . 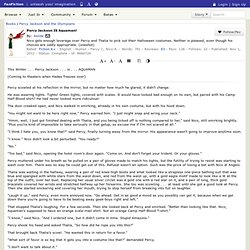 Percy Jackson . . . is . . . AQUAMAN (Coming to theaters when Hades freezes over) Dear Diary, a pride and prejudice fanfic. AN: Okay, another story born of a class. 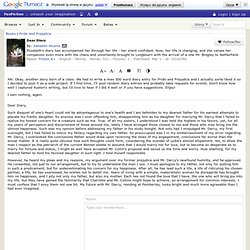 We had to write a max 500 word diary entry for Pride and Prejudice and I actually sorta liked it so I decided to post it as a side project. If I find time, I'll post random diary entries and probably take requests for events. Lightning and Thunder, an outsiders fanfic. Lightning and Thunder Disclaimer: the singing cricket lied, my wish on a star didn't come true so the characters still don't belong to me. 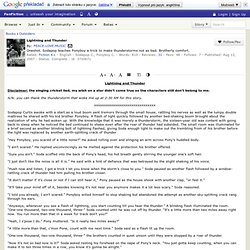 A/N: you can thank the thunderstorm that woke me up at 2:30 AM for this story. xxxxxxxxxxxxxxxxxxxxxxxxxxxxxxx Sodapop Curtis awoke with a start as a loud boom sent tremors through the small house, rattling his nerves as well as the lumpy double mattress he shared with his kid brother Ponyboy. A flash of light quickly followed by another bed-shaking boom brought about the realization of why he had woken up. Picking Up the Glass, an outsiders fanfic. Believe, a halo fanfic. His eyes flashed open. 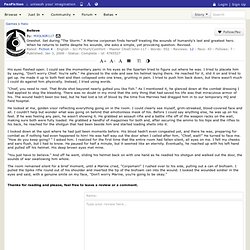 I could see the momentary panic in his eyes as the Spartan tried to figure out where he was. I tried to placate him by saying, "Don't worry Chief. You're safe. " He glanced to the side and saw his helmet laying there.