Not on livejournal or tumblr

Fleeting Fancies - Fanworks Recommendations. First off, I would like to say a great big thank you to Hana for hosting me on Nokoru.net, which she graciously offered me when I was complaining about Brinkster continually going over my bandwith limit. 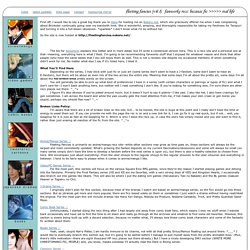 She is wonderful, amazing, and thoroughly responsible for taking my fondness for Tenipuri and turning it into a full-blown obsession. *sparkles* I don't know what I'd do without her. So the site is now hosted at The bio for tomomichi explains this better and in more detail, but I'll write a condensed version here. This is a recs site and a personal one at that--meaning, everything here is what I liked. What You'll Find Here: Depending on the series, I may stick with just fic or just art (some series don't seem to have a J-fandom, some don't seem to have an E-fandom), but there will be about an even mix of the two across the entire site.

Cartoons Series :: I like X-Men: Evolution. /Other Junk/ Series :: Anything that doesn't fit into one of the other sections. Harry Potter fic recs. Slash It's All About the Subterfuge by Abra. 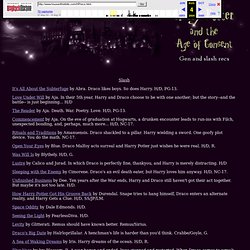 Draco likes boys. So does Harry. H/D, PG-13. Love Under Will by Aja. The Reader by Aja. Commencement by Aja. Rituals and Traditions by Amanuensis. Open Your Eyes by Blue. Was Will Is by Blythely. Lustre by Calico and Jurad. Sleeping with the Enemy by Cimorene. Unfinished Business by Dee. How Harry Potter Got His Groove Back by Durendal. Space Oddity by Dale Edmonds. Seeing the Light by FearlessDiva. Levity by Glitterati.

Z i p p o s a n d s a f e t y p i n s. = Y M M V = CHICAGO'S MOST WANTED by Speranza (dS, NC17) The author's note sums this up best: Before you read the story, I'd like you to ask yourself: "So, if it ends up being a little bit like The Usual Suspects meets The Fugitive meets The Sound of Music -- well, is that really a *bad* thing? 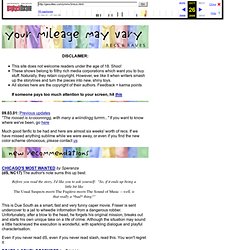 " This is Due South as a smart, fast and very funny caper movie. Fraser is sent undercover to a jail to wheedle information from a dangerous robber. Unfortunately, after a blow to the head, he forgets his original mission, breaks out and starts his own unique take on a life of crime. Although the situation may sound a little hackneyed the execution is wonderful, with sparkling dialogue and playful characterisation. Torch's old recommendations. Through the Looking Glass. I like Alternate Universes in fanfic a lot, so I've collected recs for my favorites in this genre. 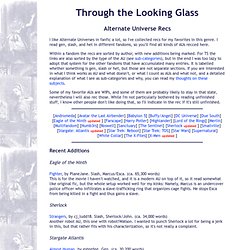 I read gen, slash, and het in different fandoms, so you'll find all kinds of AUs recced here. Within a fandom the recs are sorted by author, with new additions being marked. For TS the links are also sorted by the type of the AU (see sub-categories), but in the end I was too lazy to adopt that system for the other fandoms that have accumulated many entries. Three's Company: A list of Stargate SG-1 Jack/Sam/Daniel fan fiction. What's With All This Gen Crap, Anyway? Recommendations Index. ATTENTION: Updates will now be here. 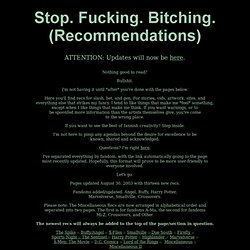 Nothing good to read? Bullshit. I'm not having it until *after* you're done with the pages below. Some Fics Wander By Mistake. Best of Sentinel Fanfiction on the Web. Find out how you can help keep The Sentinel on the air!!! 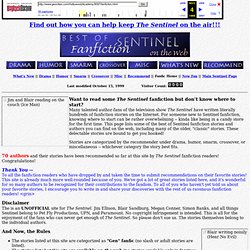 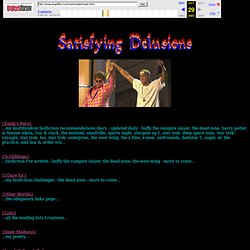 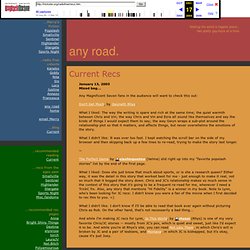 Any Magnificent Seven fans in the audience will want to check this out: Don't Get Much, by Gwyneth Rhys. Latest update: June 22, 2014 What’s changed? 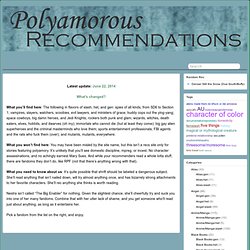 What you’ll find here: The following in flavors of slash, het, and gen: spies of all kinds, from SD6 to Section 1; vampires, slayers, watchers, scoobies, evil lawyers, and ministers of grace; buddy cops out the ying-yang; space cowboys, big damn heroes, and Jedi Knights; rockers both punk and glam; wizards, witches, death eaters, elves, hobbits, and dwarves (oh my); immortals who cannot die (but at least they come); big gay alien superheroes and the criminal masterminds who love them; sports entertainment professionals; FBI agents and the rats who fuck them (over); and mutants, mutants, everywhere. What you won’t find here: You may have been misled by the site name, but this isn’t a recs site only for stories featuring polyamory. 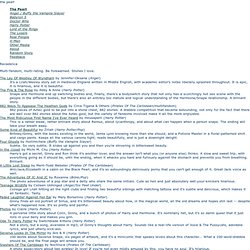 Be forewarned. Stories I love. The Lay Of Westley Of Wyndham by Jennifer-Oksana (Angel) Nightlock Recs. Melina's Misty Moon. Media-cow.net: Fan Fiction and Video Recommendations. Mayitbe.co.uk. Read Any Good Fic Lately?! Madrigal's Stargate Reviews. Reviews on this page marked with * were written for the The Gate Review.Unfortunately, The Gate Reviewhas gone the way of the dinosaur and no longer exists on the net.

I am trying to host as many of these reviews as I can here. Madrigal’s Fanfiction Recs. Lady Sorka's Fanfic Recs. Know it Alls. Welcome to Know it Alls, the very best of Harry Potter Fanfiction Recs. We want to point you to the best stories in Harry Potter in all pairings and ratings, both Het and Slash, as well as Gen centered on all the different characters, but we have our own preferences that draw us to certain kinds of stories. You can help us diversify by giving us suggestions for stories in the underrepresented pairings on our Suggestions page and a Know-it-All will check them out. And who knows, if we like your recommendations and come to trust your judgement, we may not just include them among our recs but ask you to become a Know-it-All.