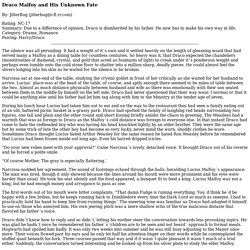 He now has to make his own way in life. Category: Drama, Romance Pairing: Harry/Draco The silence was all pervading. Narcissa sat at one end of the table, studying the crystal goblet in front of her critically as she waited for her husband to arrive. During his lunch hour Lucius had taken him out to eat and on the way to the restaurant they had seen a family eating out of an old, battered picnic basket in a grassy park.

“Do your new robes meet with your approval?’ “Of course Mother. A New Spin on an Old Story Chapter 1: 1 If a Tree Fell on your Head, a harry potter fanfic. (All characters and canon situations belong to JK Rowling and I make no money from the publishing or writing of this story, so relax, enjoy, and please, tell me what you think. 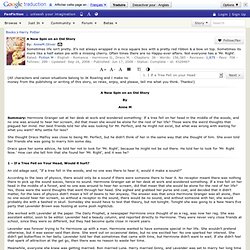 Thanks!) A New Spin on an Old Story By Anne M Summary: Hermione Granger sat at her desk at work and wondered something: If a tree fell on her head in the middle of the woods, and no one was around to hear her scream, did that mean she would be alone for the rest of her life? She thought Draco Malfoy was close to being Mr. Draco gave her some advice, he told her not to look for 'Mr. 1 – If a Tree Fell on Your Head, Would it hurt? An old adage said, "If a tree fell in the woods, and no one was there to hear it, would it make a sound? " According to the laws of physics, there would only be a sound if there were someone there to hear it. She worked with Lavender at the paper. Lavender was forever trying to fix Hermione up with a man. Meanwhile, everyone she knew was getting married. 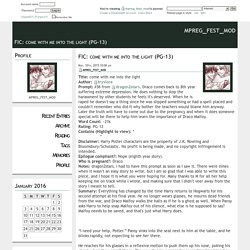 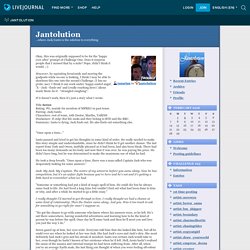 Does it surprise people that I missed that by a mile? Change for the World Master List - Caveat Lector. Torchwood: And You Will Know Her, 1/3 - Gila's Cave. Pocket Watch Boy (Torchwood) 1/4 - So Says I. Pocket Watch Boy 1/4The life and times of Ianto JonesA Torchwood/Doctor Who storyby mhalachaiswords Summary: Ianto Jones is a very different sort of boy. 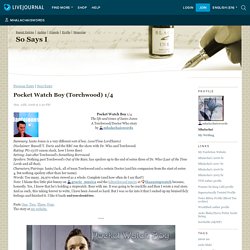 Reach Out and Touch Someone - Part Two - Scrying the Rift. Characters: Jack, Ianto, rest of team, OCs, Tenth Doctor, MarthaRating: NC-16Disclaimer: Not mine, they belong to the BBC and RTDSpoilers: General, for series 1Summary: Jack may be out of sight, but not out of touch It was typical, of course. 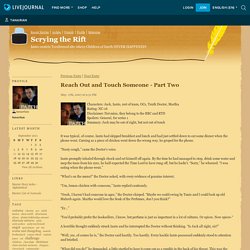 Ianto had skipped breakfast and lunch and had just settled down to eat some dinner when the phone went. Cursing as a piece of chicken went down the wrong way, he groped for the phone. “Nasty cough,” came the Doctor’s voice. Ianto promptly inhaled through shock and set himself off again. “What’s on the menu?” Burning Bright - Part One - Scrying the Rift. Okay, a little while ago I posted a Five Ways fic on one of the boards.

Can't remember where but I'm pretty certain I did post it as I got some very nice and generous comments and I hope I'm not so far gone as to hallucinate that kind of thing. Anway, it was 'Five Ways that Jack Didn't Come Back (And One Where He Did' and several people mentioned that they would like some of those ways expanded. Certain People are mean. This is the first one to be given that treatment. Title: Burning BrightCharacters: Ianto, Jack, Ten, some mention of the others.Rating: PGDisclaimer: Not mine, they belong to the BBC and RTDSpoilers: General, for series 1Summary: Jack's back but Ianto's not pleased to see him. The door to the TARDIS opened and Jack stepped out into the main Hub.

“So this is Torchwood Three,” the Doctor observed. Jack nodded thoughtfully, having realised the same thing. Cricket. By Saber ShadowKitten Part One I'm in love with Xander. 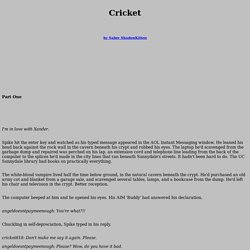 Spike hit the enter key and watched as his typed message appeared in the AOL Instant Messaging window. He leaned his head back against the rock wall in the cavern beneath his crypt and rubbed his eyes. The laptop he'd scavenged from the garbage dump and repaired was perched on his lap, an extension cord and telephone line leading from the back of the computer to the splices he'd made in the city lines that ran beneath Sunnydale's streets. The white-blond vampire lived half the time below ground, in the natural cavern beneath the crypt. The computer beeped at him and he opened his eyes. Reality Is For Those Who Lack Imagination. List of Finder Communities. All fandoms. All ratings. FREE! Commonly Quixotic. Fuck Yeah All The Fic Recs.

Easy As Falling by Lomonaaeren Harry doesn’t really like the way things are going in the wizarding world. 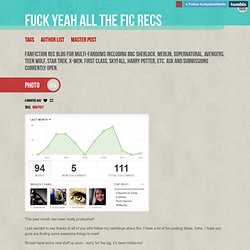 But who’s going to do something about it? …Him, that’s who! (Or, how Harry became a Benevolently Snarky Dark Lord). Someone asked me to add some Harry Potter recs to my blog a little while ago and I thought this would be the perfect fic to start us off!