All Johnlock All The Time. Dumping Ground for Sherlock fic recs. I did my best categorizing these fics but some of you may disagree with me and I’m open so feel free to let me know if you think a fic under a category should be changed. 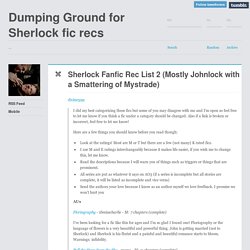 Also if a link is broken or incorrect, feel free to let me know! Here are a few things you should know before you read though:Look at the ratings! Most are M or T but there are a few (not many) K rated fics.I use M and E ratings interchangeably because it makes life easier, if you wish me to change this, let me know. Read the descriptions because I will warn you of things such as triggers or things that are prominent.All series are put as whatever it says on AO3 (if a series is incomplete but all stories are complete, it will be listed as incomplete and vice versa)Send the authors your love because I know as an author myself we love feedback.

I promise we won’t hurt youAUsFloriography - 1bmisscharlie - M: 7 chapters (complete)I’ve been looking for a fic like this for ages and I’m so glad I found one! We take fanfiction very seriously. Sherlock: Recs: slash and Gen / friendship Part 2 - alicambsrecs. LJ can't cope with the number of recs so I'm splitting the list in two... 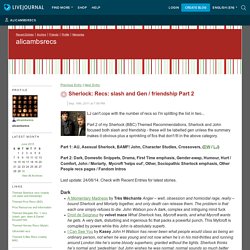 Part 2 of my Sherlock (BBC) Themed Recommendations, Sherlock and John focused both slash and friendship - these will be labelled gen unless the summary makes it obvious plus a sprinkling of fics that don't fit in the above category. Part 1: AU, Asexual Sherlock, BAMF! John, Character Studies, Crossovers, (DW / LJ) Part 2: Dark, Domestic Snippets, Drama, First Time emphasis, Gender-swap, Humour, Hurt / Comfort, John / Moriarty, Mycroft 'helps out', Other, Sociopathic Sherlock emphasis, Other People recs pages / Fandom Intros Last update: 24/08/14. Dark A Momentary Madness by Très Méchante Anger – well, obsession and homicidal rage, really – bound Sherlock and Moriarty together, and only death can release them. Tatterdemalion Scrawling. Why You Should Be Reading: Breadcrumbs and Echoes... 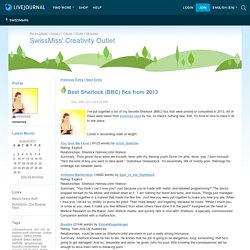 All of these were taken from previous recs by me, so there's nothing new. Still, it's kind of nice to have it all in one place. Listed in ascending order of length: You Give Me Fever (16122 words) by michi_thekillerRating: ExplicitRelationships: Sherlock Holmes/John WatsonSummary: Thou givest fever when we kisseth, fever with thy flaming youth Fever I'm afire; fever, yea, I burn forsooth "He's the kind of boy you want to take apart. " Gratuitous Greaserlock. Software Malfunction (16682 words) by tiger_in_the_flightdeckRating: ExplicitRelationships: Sherlock Holmes/John WatsonSummary: "You think I can’t love you? Breathe (21146 words) by StoneWingedAngelRating: Teen And Up AudiencesRelationships: could be seen as Sherlock/John pre-slash or just a really strong bromanceSummary: Sherlock knows he has to die.

The Seventeenth Step. By Katie Forsythe An April's Journey: Set against "The Reigate Squire", Watson learns Holmes has fallen ill in France, and for another reason than simple exhaustion. 13,600 words. 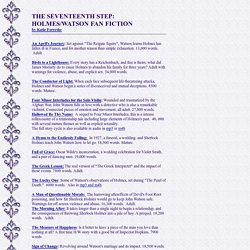 Adult. Birds to a Lighthouse: Every story has a Reichenbach, and this is theirs: what did James Moriarty do to cause Holmes to abandon his family for three years? Adult with warnings for violence, abuse, and explicit sex. 54,000 words. The Conductor of Light: When each face subsequent life-threatening attacks, Holmes and Watson begin a series of ill-conceived and mutual deceptions. 8500 words. Four Minor Interludes for the Solo Violin: Wounded and traumatized by the Afghan War, John Watson falls in love with a detective who is also a remarkable violinist. A Hymn to the Endlessly Falling: In 1927, a funeral, a wedding, and Sherlock Holmes teach John Watson how to let go. 18,300 words. Full of Grace: Oscar Wilde's incarceration, a wedding celebration for Violet Smith, and a pair of dancing men. 19,000 words.