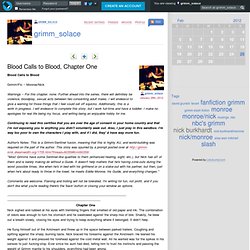 Fic ~ Monroe/Nick Warnings ~ For this chapter, none. Further ahead into the series, there will definitely be violence, bloodplay, sexual acts between two consenting adult males. I will endeavor to give a warning for those things that I feel could set off squicks. Continuing to read this certifies that you are over the age of consent in your home country and that I'm not exposing you to anything you didn't voluntarily seek out. Author's Notes: This is a Grimm/Sentinel fusion, meaning that this is highly AU, and world-building was required on the part of the author. "Most Grimms have some Sentinel-like qualities to them (enhanced hearing, sight, etc.), but Nick has all of them and is barely making do without a Guide.

Comments are welcome. Grimm. @grimm_kink. Bridgetown-Grimm (TV)-Tiriel. Nick looked up from his paperwork to see two blond men in jeans and work shirts standing over his desk. 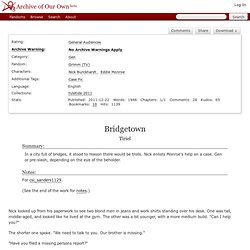 One was tall, middle-aged, and looked like he lived at the gym. The other was a bit younger, with a more medium build. "Can I help you? " The shorter one spoke. "We need to talk to you. "Have you filed a missing persons report? " Long Family Tradition-Grimm (TV)-Bodldops. It began in June. 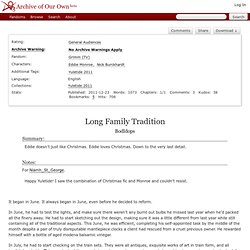 It always began in June, even before he decided to reform. In June, he had to test the lights, and make sure there weren't any burnt out bulbs he missed last year when he'd packed all the finery away. He had to start sketching out the design, making sure it was a little different from last year while still containing all of the traditional aspects. This June, he was efficient, completing his self-appointed task by the middle of the month despite a pair of truly disreputable mantlepiece clocks a client had rescued from a cruel previous owner. He rewarded himself with a bottle of aged modena balsamic vinegar. In July, he had to start checking on the train sets. August was the last of the warm summer months, and time to start planning the cookies. Mmmm, toddlers. Just for that thought, even though he had a full cookie inventory planned well before the end of the month, he didn't get himself a reward.

In September, he had to get to work in earnest. Fuck Yeah, Nick Burkhardt! Sobek Drowning Chapter 1, a Criminal Minds + Grimm Crossover fanfic. Monroe/Nick Burkhardt. The Sterek & More Collection - "What I Did On My Summer Vacation" by Grimm (Sterek Fic Revie) Squee! Recs » Chris and Tess' Bookmarks. Monroelicious - Fic Rec: In Which Things are Started by Monroe's Love of Clocks by Anonymous. 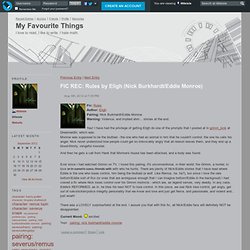 Yes! I have had the privilege of getting Eligh do one of the prompts that I posted at in grimm_kink at Dreamwidth, which was: Monroe was supposed to be the blutbad - the one who had an animal in him that he couldn't control; the one he calls his anger. Nick never understood how people could get so irrevocably angry that all reason leaves them, and they end up a blood-thirsty, vengeful monster. And then he gets a call from Hank that Monroe's house has been attacked, and a body was found. Ever since I had watched Grimm on TV, I loved this pairing. There was a LOVELY surprise/twist at the end. Fuck Yeah Monroe/Nick. Sheepish Wolves - Grimm fic rec. Sharkskin Tuxedo. Another Slash Fanatic?, Aya's Nick/Monroe Fic Rec Starter Kit. Fanfic Recommendations. Grimm fic. Hermyone6: GRIMM fics rec. FanficRecs/GRIMM. Somehow this became all about Grimm. Grimm Crossover Archive. Not your Grimmopedia. Not your personal Grimmopedia. 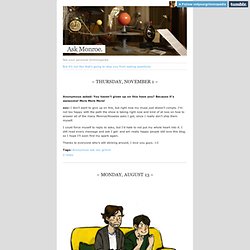 Anonymous asked: You haven't given up on this have you? Because it's awesome! More More More! Ooc: I don’t want to give up on this, but right now my muse just doesn’t comply. I’m not too happy with the path the show is taking right now and kind of at loss on how to answer all of the many Monroe/Rosalee asks I got, since I really don’t ship them myself. I could force myself to reply to asks, but I’d hate to not put my whole heart into it. Thanks to everyone who’s still sticking around, I love you guys. <3 Tags: Anonymous ask ooc grimm 2 notes Anyone willing to get me one of those promo bags/free merchandise and ship it to Germany?

Also, Monroe’s next reply will be up soon and it will feature the beauty that is female! Grimm_cop - Profile. "Grimm" is a new drama series inspired by the classic Grimm's Fairy Tales.Portland homicide Detective Nick Burkhardt (David Giuntoli, "Turn The Beat Around") discovers he is descended from an elite line of criminal profilers known as "Grimms," charged with keeping balance between humanity and the mythological creatures of the world. 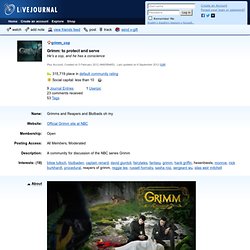 As he tries to hide the dangers of his new found calling from his fiancé, Juliette Silverton, (Bitsie Tulloch, "quarterlife"), and his partner, Hank Griffin (Russell Hornsby, "Lincoln Heights"), he becomes ever more entrenched in the ancient rivalries and alliances of the Grimm world. With help from his confidant, Monroe (Silas Weir Mitchell, "Prison Break"), a reformed Grimm creature himself, Nick must navigate through the forces of a larger-than-life mythology, facing off with Hexenbiests, Blutbaden and all manner of ancient evils, including royal lines dating back to the original profilers themselves, The Grimm Brothers. The Rules: The Grimm Kink Meme - Prompt Post 1. Grimm fic rec community. Grimm_fic - Profile. Leoraine's Corner. Epic Recs. Sorry for not posting last week. 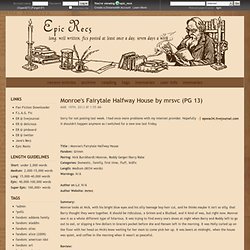 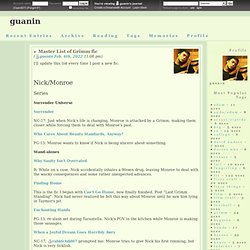 Nick/Monroe Series Surrender Universe Surrender NC-17; Just when Nick's life is changing, Monroe is attacked by a Grimm, making them closer while forcing them to deal with Monroe's past. Who Cares About Beauty Standards, Anyway? Fanfic Recommendations. Grimm Crossover Fanfiction. Called to Portland by her mother, Willow finds out that she is a Grimm, cousin to one Nick Burkhardt. 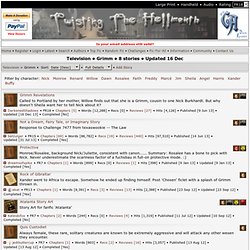 But why doesn't Sheila want her to tell Nick about it? Response to Challenge 7477 from texaswookie -- The Law Monroe/Rosalee, background Nick/Juliette, consistent with canon...... I'm a Wolfling now : Grimm fic rec. Grimm - List. Grimm Friday Fic Recs - This is a fantasy based on reality. Fuck Yeah Monroe/Nick (Fic Rec: Ask Me No Questions & The (Grimm and Blutbad) Book Club (for the Eager and the Doomed) by Lacey McBain) PROMPT POST 2. Monroe_nick - Profile.