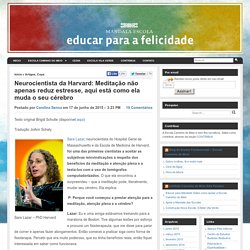 Eye Movement. Constelaçoes. Astrologia. Xamanismo. Mindfulness as effective as pills for treating recurrent depression - study. Mindfulness-based cognitive therapy may be as good as pills at stopping people relapsing after recovering from major bouts of depression, according to a study. 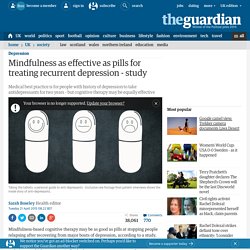 Mindfulness-based cognitive therapy (MBCT) was developed from mindfulness techniques, which encourage individuals to pay more attention to the present moment, combined with cognitive behaviour therapy (CBT), specifically to try to help people who have recurring depression. It teaches people to recognise that negative thoughts and feelings will return, but that they can disengage from them. Rather than worrying constantly about them, people can become aware of them, understand them and accept them, and avoid being dragged down into a spiral leading back to depression. Current best practice, endorsed by Nice (the National Institute for Health and Care Excellence) is to encourage people with a history of recurrent depression to remain on antidepressants for at least two years.

Gut Feelings. Have you ever had a "gut feeling" about something that's later turned out to be true? 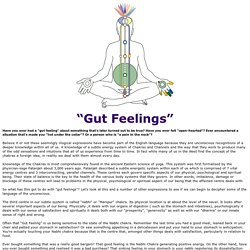 Have you ever felt "open-hearted"? Ever encountered a situation that's made you "hot under the collar"? Or a person who is "a pain in the neck"? Believe it or not these seemingly illogical expressions have become part of the English language because they are unconscious recognitions of a deeper knowledge within all of us. A knowledge of a subtle energy system of Chakras and Channels and the way that they work to produce many of the odd sensations and intuitions that all of us experience from time to time. Knowledge of the Chakras is most comprehensively found in the ancient Eastern science of yoga. So what has this got to do with "gut feelings"?

The third centre in our subtle system is called "nabhi" or "Manipur" chakra. Often that “Gut Feeling” is us being sensitive to the state of the Nabhi chakra. Chakra Tones. Chakra Tones Sound is the very basis of music. 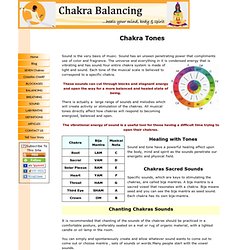 Sound has an unseen penetrating power that compliments use of color and fragrance. The universe and everything in it is condensed energy that is vibrating and has sound. Your entire chakra system is made of light and sound. Each tone of the musical scale is believed to correspond to a specific chakra. These sounds can cut through blocks and stagnant energy and open the way for a more balanced and healed state of being.

There is actually a large range of sounds and melodies which will create activity or stimulation of the chakras. The vibrational energy of sound is a useful tool for those having a difficult time trying to open their chakras. It is recommended that chanting of the sounds of the chakras should be practiced in a comfortable posture, preferably seated on a mat or rug of organic material, with a lighted candle or oil lamp in the room. Support your deep breath with in your diaphragm. Your Information Source for Chakras.

Numerology. A guide to the science of numerology, number sequences (111, 222, 333, 444, 555, 666, 777, 888, 999, 000), signs from the angels and spirit guides and a free numerology reading. Numerology Numerology is the study of numbers, and the occult manner in which they reflect certain aptitudes and character tendencies, as an integral part of the cosmic plan. 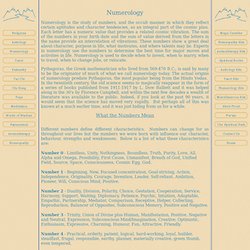 Each letter has a numeric value that provides a related cosmic vibration. The sum of the numbers in your birth date and the sum of value derived from the letters in the name provide an interrelation of vibrations. These numbers show a great deal about character, purpose in life, what motivates, and where talents may lie. Experts in numerology use the numbers to determine the best time for major moves and activities in life.

Pythagoras, the Greek mathematician who lived from 569-470 B.C., is said by many to be the originator of much of what we call numerology today. What the Numbers Mean Different numbers define different characteristics. Beware Sexually Transmitted Demons - AETHERFORCE. “The openness and surrender during sexual intercourse can allow the exchange of attached entities between two people. 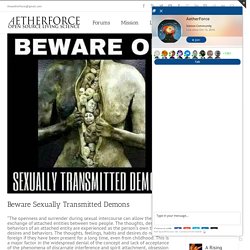 The thoughts, desires and behaviors of an attached entity are experienced as the person’s own thoughts, desires and behaviors. The thoughts, feelings, habits and desires do not seem foreign if they have been present for a long time, even from childhood. This is a major factor in the widespread denial of the concept and lack of acceptance of the phenomena of discarnate interference and spirit attachment, obsession or possession.” – Dr. William Baldwin, Spirit Releasement Therapy “People also pick up entity attachments through sex. If you have sex with someone that has a entity or demon, you will absorb that entity into yourself. . – Peter Michael, entityattachment.com “Vast beings, living for thousands of years in your terms, make their living ruling and parenting you, seeking their value from you because you have considered yourselves valueless and purposeless.