Logo.ai. Logo. Logo. Moss graffiti. How to Make Moss Graffiti - The Step by Step "Grow" Guide. Before getting into our guide on making moss graffiti, let’s talk about the impact of paint in the graffiti world. 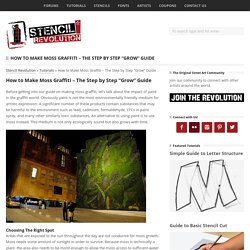 Obviously paint is not the most environmentally friendly medium for artistic expression. A significant number of these products contain substances that may be harmful to the environment such as lead, cadmium, formaldehyde, CFCs in paint spray, and many other similarly toxic substances. An alternative to using paint is to use moss instead. This medium is not only ecologically sound but also grows with time. Choosing The Right Spot Areas that are exposed to the sun throughout the day are not conducive for moss growth.

Planning The Graffiti Piece Good artwork takes careful preparation. Gathering The Materials Once a tentative plan has been chalked out, it is now time to collect the materials needed to churn out the moss paint”. Preparing The Moss For Processing Wash the moss carefully. Mixing It All Together Place the washed, broken up moss in the blender. Moss Graffiti: The Coolest DIY Project Ever. Contemporary artists have discovered that street art is not only beautiful to look at, but that it can also be soft and smooth to the touch. 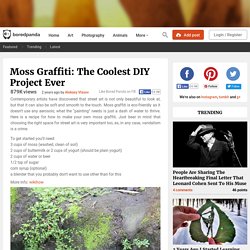 Moss graffiti is eco-friendly as it doesn’t use any aerosols; what the “painting” needs is just a dash of water to thrive. Here is a recipe for how to make your own moss graffiti. Just bear in mind that choosing the right space for street art is very important too, as, in any case, vandalism is a crime. To get started you’ll need: 3 cups of moss (washed, clean of soil) 2 cups of buttermilk or 2 cups of yogurt (should be plain yogurt) 2 cups of water or beer 1/2 tsp of sugar corn syrup (optional) a blender that you probably don’t want to use other than for this More info: wikihow Image credits: wikihow Image credits: webponce (artist Anna Garforth) Image credits: Edina Tokodi Image credits: Jaime Rojo (artist Hugo Rojas) 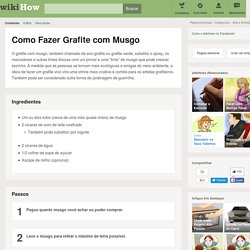 À medida que as pessoas se tornam mais ecológicas e amigas do meio-ambiente, a ideia de fazer um grafite vivo vira uma vitrine mais criativa e correta para os artistas grafiteiros. Também pode ser considerado outra forma de jardinagem de guerrilha. Anúncio Ingredientes. How to Make Moss Graffiti. Moss graffiti. Moss graffiti is a recent trend in street art that uses living moss to write on the walls of public spaces.[1][2] Moss can be blended and painted onto a wall, and may then grow in position.[3] By replacing the harmful chemicals found in paints (such as methanol, which damages the nervous system when consumed in large quantities [4]) with plant matter, the artist can still create works without damaging the environment. 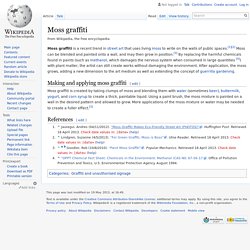 After application, the moss grows, adding a new dimension to the art medium as well as extending the concept of guerrilla gardening. Making and applying moss graffiti[edit] Moss graffiti is created by taking clumps of moss and blending them with water (sometimes beer), buttermilk, yogurt, and corn syrup to create a thick, paintable liquid. Using a paint brush, the moss mixture is painted on a wall in the desired pattern and allowed to grow. More applications of the moss mixture or water may be needed to create a fuller effect.[3] References[edit] DIY: How to Make Your Own Green Moss Graffiti! We lurve green graffiti, so when we spotted this DIY moss graffiti recipe over on Green Prophet we just had to share it with you. 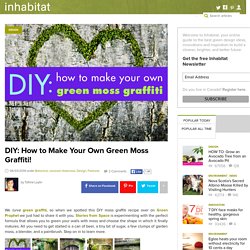 Stories from Space is experimenting with the perfect formula that allows you to green your walls with moss and choose the shape in which it finally matures. All you need to get started is a can of beer, a tiny bit of sugar, a few clumps of garden moss, a blender, and a paintbrush. Step on in to learn more. 1 can of beer 1/2 tsp of sugar several clumps of moss a plastic container a blender a paintbrush Go out and find some garden moss, grab quite a bit of it, and push it into your blender. Once you have found a moist and shaded section of wall, you can start painting your moss graffiti. . + Stories from Space.