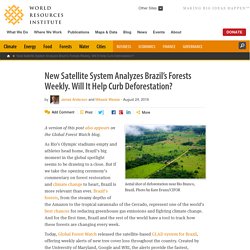 As Rio’s Olympic stadiums empty and athletes head home, Brazil’s big moment in the global spotlight seems to be drawing to a close. But if we take the opening ceremony’s commentary on forest restoration and climate change to heart, Brazil is more relevant than ever. Brazil’s forests, from the steamy depths of the Amazon to the tropical savannahs of the Cerrado, represent one of the world’s best chances for reducing greenhouse gas emissions and fighting climate change. And for the first time, Brazil and the rest of the world have a tool to track how these forests are changing every week. Leads 1st Local-to-Global Mapping of Forest. COLLEGE PARK, Md. - A University of Maryland-led, multi-organizational team has created the first high-resolution global map of forest extent, loss and gain. 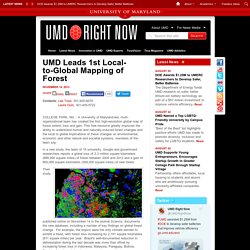 This free resource greatly improves the ability to understand human and naturally-induced forest changes and the local to global implications of these changes on environmental, economic and other natural and societal systems, members of the team say. In a new study, the team of 15 university, Google and government researchers reports a global loss of 2.3 million square kilometers (888,000 square miles) of forest between 2000 and 2012 and a gain of 800,000 square kilometers (309,000 square miles) of new forest. Their study, published online on November 14 in the journal Science, documents the new database, including a number of key findings on global forest change. For example, the tropics were the only climate domain to exhibit a trend, with forest loss increasing by 2,101 square kilometers (811 square miles) per year. Global Forest Change. Results from time-series analysis of Landsat images in characterizing global forest extent and change from 2000 through 2014. 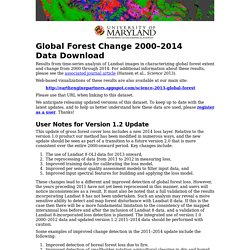 For additional information about these results, please see the associated journal article (Hansen et al., Science 2013). Web-based visualizations of these results are also available at our main site: Please use that URL when linking to this dataset. We anticipate releasing updated versions of this dataset. To keep up to date with the latest updates, and to help us better understand how these data are used, please register as a user. User Notes for Version 1.2 Update This update of gross forest cover loss includes a new 2014 loss layer. GFW Commodities. Oops, your browser isn't supported. Global Forest Change. Litigio Estrategico Mudanca Climatica – Google Drive. Carbon Sinks in Crisis — It Looks Like the World’s Largest Rainforest is Starting to Bleed Greenhouse Gasses. 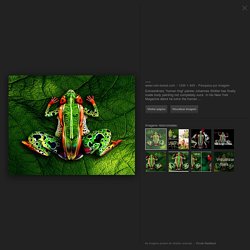 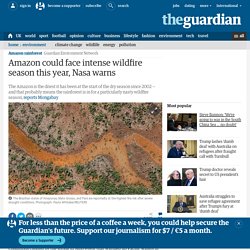 In the Amazon basin, that meant reduced rainfall during the wet season, plunging some parts of the region into severe drought. According to NASA, the Amazon is the driest it’s been at the start of the dry season since 2002 — and that probably means the rainforest is in for a particularly nasty wildfire season, according to Doug Morton, an Earth scientist with the U.S. agency and a co-creator of the Amazon fire forecast, which uses climate observations and active fire detections by NASA satellites to predict fire season severity. “Severe drought conditions at the start of the dry season have set the stage for extreme fire risk in 2016 across the southern Amazon,” Morton said in a statement. Predicting South American fire season severity (FSS) Predicting South American fire season severity (FSS) This webpage presents a prediction of fire risk for the 2015 dry season in high biomass burning regions of South America. 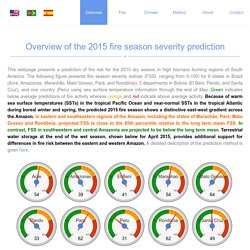 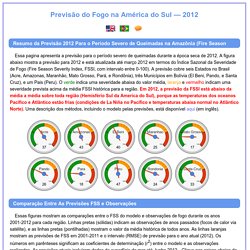