Personal, Business, Education. Here, at myHistro, we are big believers in creating and sharing meaningful content. 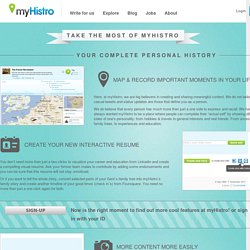 We do not believe that casual tweets and status updates are those that define you as a person. We do believe that every person has much more than just a one side to express and recall. We have always wanted myHistro to be a place where people can complete their “actual self” by showing different sides of one's personality: from hobbies & travels to general interests and real friends. From ancestors and family trees, to experiences and education. You don’t need more than just a two clicks to visualize your career and education from LinkedIn and create a compelling visual resume. Or if you want to tell the whole story, convert selected parts of your Geni´s family tree into myHistro´s family story and create another timeline of your good times (check in´s) from Foursquare. Now is the right moment to find out more cool features at myHistro! MyHistro does it all for you! Create your FREE account right now! När jorden blev platt. Create amazing maps with your data — CartoDB.

Animaps - Create and view beautifully informative animated maps, for free! Holocaust: History In An Hour. The Holocaust, in which 11 million people died, was the largest atrocity of the 20th century and perhaps the hardest to understand. 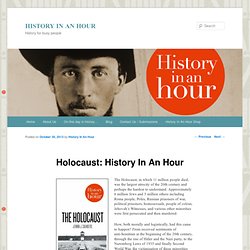 Approximately 6 million Jews and 5 million others including Roma people, Poles, Russian prisoners of war, political prisoners, homosexuals, people of colour, Jehovah’s Witnesses, and various other minorities were first persecuted and then murdered. How, both morally and logistically, had this came to happen? From received sentiments of anti-Semitism at the beginning of the 20th century, through the rise of Hitler and the Nazi party, to the Nuremberg Laws of 1935 and finally Second World War, the victimisation of these minorities intensified beyond precedent. With the complicity of a nation hatred became policy. Only 99p / $1.99. Also available as an audio download. Contents: Politics, Protestantism and Personality: the Causes of the English Civil WarHistory in an Hour.

Such violent upheaval of the nation-state, its institutions and society was a fully-blown revolution on English soil. 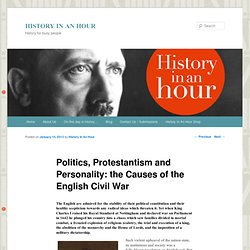 But what is striking is that this revolution was not inevitable: for although it was rooted in deep conflicts in political ideology and religion, the extraordinary course of events could have taken a different direction at several crucial points if key people in the drama, especially the King, had made other decisions. Simon Court explains. Politics Charles succeeded the throne from James I in 1625 and his early years of reign were hampered by numerous conflicts with Parliament over the raising of taxation. He was uncommunicative, uncompromising and, as we saw in my piece Killing the King: The Trial and Execution of Charles I, he was also devious and untrustworthy. Charles’ position worsened when in 1635 he decided to make ‘ship money’, which had previously been levied on only coastal counties to fund the upkeep of the navy, a national levy.

Protestantism. PanelPicker. This session will revolve around the theme 'Teaching History in the 21st Century' and will showcase the use of technology and bringing history to life both visually and engaging with a great story. 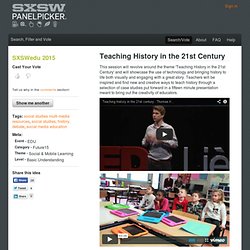 Teachers will be inspired and find new and creative ways to teach history through a selection of case studies put forward in a fifteen minute presentation meant to bring out the creativity of educators. Questions Answered New inspiring ways to teach social studiesCreativity in the social studies spaceTeachers can adopt some of these methodologies in their everyday teaching Speakers Thomas Ketchell Hstry Organizer Thomas Ketchell Hstry Show me another. The Public Domain Review. When Women Ruled Europe. Mary of Guise Next year the Church of England will appoint its first female bishop and Hilary Clinton will decide whether to try for the US presidency. 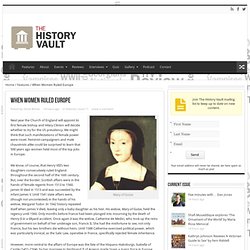 We might think that such manifestations of female power were novel. Feminist campaigners and male chauvinists alike could be surprised to learn that 500 years ago women held most of the top jobs in Europe. We know, of course, that Henry VIII’s two daughters consecutively ruled England throughout the second half of the 16th century. But, over the border, Scottish affairs were in the hands of female regents from 1513 to 1560. Map of Europe: 1000 AD to present day.

5 Good Resources for Historical Maps. Today I got an email from one of my readers here in Educational Technology and Mobile learning asking about some historical map resources to use in the social studies course he is teaching. 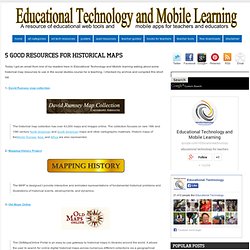 I checked my archive and compiled this short list. 1- David Rumsey map collection The historical map collection has over 43,000 maps and images online. The collection focuses on rare 18th and 19th century North American and South American maps and other cartographic materials. Historic maps of theWorld, Europe, Asia, and Africa are also represented. 2- Mapping History Project The MHP is designed t provide interactive and animated representations of fundamental historical problems and illustrations of historical events, developments, and dynamics. 3- Old Maps Online The OldMapsOnline Portal is an easy-to-use gateway to historical maps in libraries around the world. 4- Library of Congress Map Collection 5- Historic Map works.