Book Notes by David Mays. Paul Collier is Professor of Economics and Director of the Center for the Study of African Economies at Oxford University, and former director of Development Research at the World Bank. 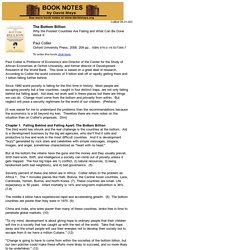 This book is based on a great deal of research. According to Collier the world consists of 5 billion well off or rapidly getting there and 1 billion falling further behind. Natinvest31. Resource Curse Definition. A nonrenewable resource is a resource of economic value that cannot be readily replaced by natural means on a level equal to its consumption. 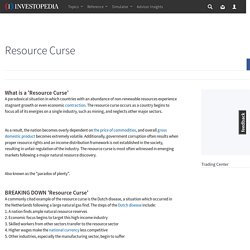 Most fossil fuels, such as oil, natural gas and coal are considered nonrenewable resources in that their use is not sustainable because their formation takes billions of years. Can Lebanon escape the resource curse? After two-and-a-half years without a president, Lebanon’s parliament finally elected Michel Aoun to the post. 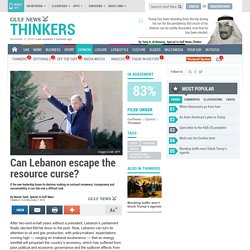 Now, Lebanon can turn its attention to oil and gas production, with policymakers’ expectations running high — verging on irrational exuberance — that an energy windfall will jumpstart the country’s economy, which has suffered from poor political and economic governance and the spillover effects from Syria’s civil war. Lebanon’s potential hydrocarbon wealth could indeed transform the country, as well as provide a model for other Middle Eastern energy producers to follow. But policymakers must be mindful of four major risks. For starters, oil and gas prices are volatile and fossil fuels in general have an uncertain future. Nrgi Resource Curse. Uganda's oil: lessons on governance and the resource curse. As fresh column inches are written about Uganda's oil resources (some exposing corruption allegations, others claiming that the government scarcely has enough money to begin refining) it is clear that managing a natural resource is a daunting challenge. 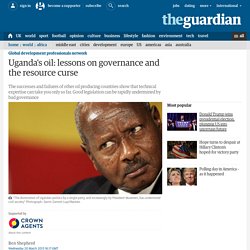 Uganda, anticipating commercial production in the next few years, has itself been gripped by intense debate. [link] Waste, corruption, environmental catastrophe and conflict in a country like Nigeria are a stark warning. The spectre of the "resource curse" looms large. What can a state like Uganda learn from resource-producing states elsewhere? The problem is not a lack of information – there is a vast specialist literature, covering everything from local content to macro-economic stabilisation mechanisms.

Workingpaper81. Case study: Burkina Faso. Sustainable Livelihoods: how Christian Aid is reducing hunger and chronic poverty for Vulnerable Communities in Burkina Faso The Problem: • Burkina Faso remains one of the poorest countries in the world. 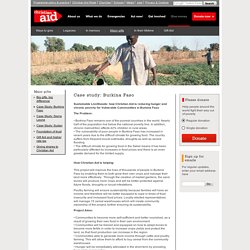 Nearly half of the population live below the national poverty line. In addition, chronic malnutrition affects 42% children in rural areas • The vulnerability of poor people in Burkina Faso has increased in recent years due to the difficult climate for growing food. Burundi – political violence - Case study. Following the end of the civil war in 2005, Burundi has made limited progress towards a more stable democracy. 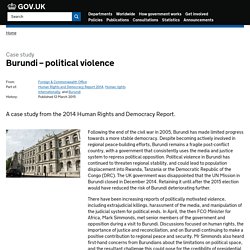 Despite becoming actively involved in regional peace-building efforts, Burundi remains a fragile post-conflict country, with a government that consistently uses the media and justice system to repress political opposition. Political violence in Burundi has continued to threaten regional stability, and could lead to population displacement into Rwanda, Tanzania or the Democratic Republic of the Congo (DRC). The UK government was disappointed that the UN Mission in Burundi closed in December 2014. Poverty and Crime: Breaking a Vicious Cycle of Discrimination. Poverty and crime have a very "intimate" relationship that has been described by experts from all fields, from sociologists to economists. 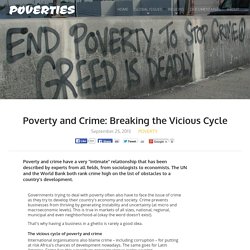 Burundi – political violence - Case study. The relationship between terrorism and economic growth: Research. The estimated number of deaths from terrorism worldwide rose from 3,329 in 2000 to 32,685 in 2014, according to a November 2015 analysis by the Institute for Economics and Peace. 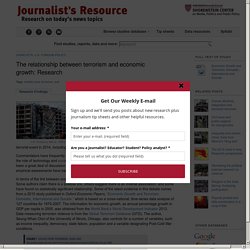 The vast majority of lives lost to terrorism in 2014 — 78 percent — took place in the five countries where most terrorism activity occurred: Iraq, Nigeria, Afghanistan, Pakistan, Syria. More than half of incidents claimed were attributed to Boko Haram and the Islamic State (ISIS or ISIL). However, 93 countries experienced at least one terrorist event in 2014, including France, Australia and Austria. The economics of violence. YESTERDAY it was Afghanistan and Congo. 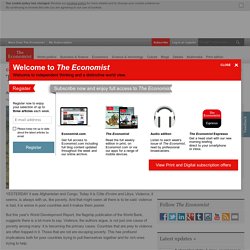 Today it is Côte d'Ivoire and Libya. Violence, it seems, is always with us, like poverty. What keeps communities locked in the extreme poverty trap? To answer the question of what traps people in extreme poverty, we must first discuss what extreme poverty actually is. 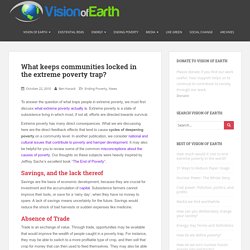 Extreme poverty is a state of subsistence living in which most, if not all, efforts are directed towards survival. Extreme poverty has many direct consequences. What we are discussing here are the direct feedback effects that tend to cause cycles of deepening poverty on a community level. In another publication, we consider national and cultural issues that contribute to poverty and hamper development.

Conflict and poverty: The economics of violence. There will be some short-term pain but Brexit will make us richer. Five immediate effects from Brexit. The short-term consequences of Brexit are severe – but financial disaster is not inevitable. The economic impact of 'Brexit' - Woodford Investment Management LLP. Capital Economics has been commissioned by Woodford Investment Management to examine the United Kingdom’s relationship with Europe and the impact of ‘Brexit’ on the British economy.

Five immediate effects from Brexit. Why Vote Leave - Vote Leave. G20: Is Theresa May changing the language of Brexit? Image copyright Getty Images. Brexit: The phoney war. Image copyright Getty Images Returning to the UK from North America is to encounter an air of unreality. Britain has embarked on the biggest constitutional change in nearly 50 years - but you wouldn't guess it. Informed but incredulous Americans ask "you really had no plan? " The much-quoted "Brexit means Brexit" is met with bafflement.

A Washington Post columnist said it had as much meaning as a parent declaring "bedtime means bedtime". Brexit Britain: What has actually happened so far? Image copyright Getty Images The UK may have voted on 23 June to leave the European Union but it is not yet clear what the country's path to Brexit will actually mean. Here we highlight the latest developments following the vote. Economy Many economists prior to the referendum had been predicting an immediate and significant impact on the UK economy and consumer confidence should the country vote to leave the EU. But this has not been borne out by the figures so far. Whatever caution businesses may be feeling when it comes to future planning, as a nation of shoppers we seem to be keeping calm and carrying on spending. Confidence among UK consumers also improved in August, though it remains below pre-Brexit vote levels.