VR Is Totally Changing How Architects Dream Up Buildings. From the Lower Manhattan offices of New York architecture firm SHoP, you can explore buildings around the world—including ones that don’t yet exist. 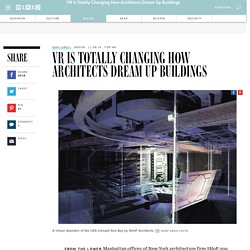 You can walk along the edges of an under-construction building in Botswana, then toggle over to the torpedo hold of the USS Intrepid on Manhattan’s West Side. But be careful, when you reach out to touch a missile you might just poke an architect, standing just beyond you and your VR goggles. This year, the commercial release of powerful, PC-driven headsets like Oculus Rift and HTC Vive pushed consumer virtual reality to an inflection point. And the world of architecture has noticed. In VR architecture, the difference between real and unreal is fluid and, to a large extent, unimportant. 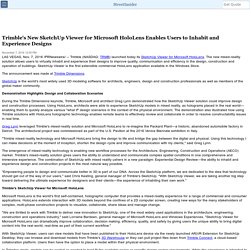 The new mixed-reality solution allows users to virtually inhabit and experience their designs to improve quality, communication and efficiency in the design, construction and operation of buildings. SketchUp Viewer is the first extensible commercial HoloLens application available in the Windows Store.

The announcement was made at Trimble Dimensions. SketchUp is the world's most widely used 3D modeling software for architects, engineers, design and construction professionals as well as members of the global maker community. Demonstration Highlights Design and Collaboration Scenarios During the Trimble Dimensions keynote, Trimble, Microsoft and architect Greg Lynn demonstrated how the SketchUp Viewer solution could improve design and construction processes.

"Empowering people to design and communicate better in 3D is part of our DNA. Availability About Trimble Buildings. Centive Solutions GmbH. (97) 3D Project Examples in under 5 minutes! [Laser Scanning, Point Clouds, 3D Models] How Mixed Reality May Change Construction Work. The worker pulls on his tool belt and snaps down the visor of his headset. 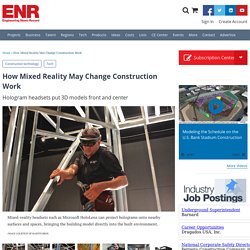 It powers on, loading the 3D model of what he needs to build—in this case, the metal framing for a hospital bathroom pod. The 3D image snaps into place, staying affixed to the floor and ceiling as he moves around it. Without the aid of a tape measure or layout laser, the worker begins assembling the framing, matching the pieces to their ghostly hologram outlines and fastening connections where the model dictates. It was only a proof-of-concept demonstration, set up in a controlled space with proper lighting for the Microsoft HoloLens to function correctly. But the results of the test by Gardena, Calif. “We did the test with the president of Martin Bros., who hadn’t picked up a tool belt in 20 years,” he says. Mixed-reality and augmented-reality systems are distinguished from the isolation of virtual reality by the ability to see what is actually around the viewer. Moving Beyond Virtual Reality.