10 Psychological Studies That Will Change What You Think You Know About Yourself. Why do we do the things we do? 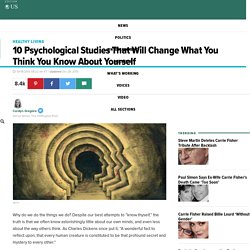 Despite our best attempts to “know thyself,” the truth is that we often know astonishingly little about our own minds, and even less about the way others think. As Charles Dickens once put it, “A wonderful fact to reflect upon, that every human creature is constituted to be that profound secret and mystery to every other.” Psychologists have long sought insights into how we perceive the world and what motivates our behavior, and they’ve made enormous strides in lifting that veil of mystery. Aside from providing fodder for stimulating cocktail-party conversations, some of the most famous psychological experiments of the past century reveal universal and often surprising truths about human nature. Here are 10 classic psychological studies that may change the way you understand yourself. We all have some capacity for evil. We don’t notice what’s right in front of us.

10 Psychology Tricks You Can Use To Influence People. Before we get started, it’s important to note that none of these methods fall under what we would term the dark arts of influencing people. 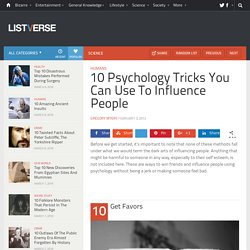 Anything that might be harmful to someone in any way, especially to their self esteem, is not included here. These are ways to win friends and influence people using psychology without being a jerk or making someone feel bad. Trick: Get someone to do a favor for you—also known as the Benjamin Franklin effect. Legend has it that Benjamin Franklin once wanted to win over a man who didn’t like him. He asked the man to lend him a rare book and when the book was received he thanked him graciously. Scientists decided to test this theory and found that those who were asked by the researcher for a personal favor rated the researcher much more favorably than the other groups did. Trick: Ask for way more than you want at first then scale it back later.

This trick is sometimes known as the door in the face approach. Trick: Mirror their behavior. How To Use These 3 Hypnotic “Power Words” To Covertly Increase Your Conversion Rates. Imagine if you had the power to influence people’s subconscious minds. 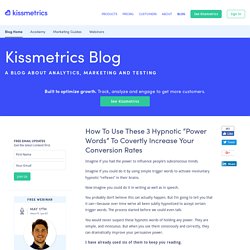 Imagine if you could do it by using simple trigger words to activate involuntary hypnotic “reflexes” in their brains. Now imagine you could do it in writing as well as in speech. You probably don’t believe this can actually happen. But I’m going to tell you that it can—because over time we’ve all been subtly hypnotized to accept certain trigger words. The process started before we could even talk. You would never suspect these hypnotic words of holding any power. I have already used six of them to keep you reading. Now, I doubt you will ever guess all of them—let alone deconstruct why they work. But before I do that, a word about what hypnosis is, is not—and why these words are considered hypnotic. What Hypnosis Actually Is Few marketers have more than a common “knowledge” about hypnosis.

How To Get Buyers To Take Action With A Strange But Effective Concept. That’s the goal, right? 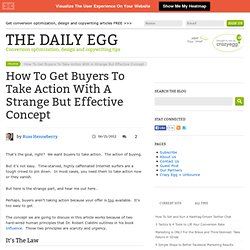 We want buyers to take action. The action of buying. But it’s not easy. Time-starved, highly caffeinated Internet surfers are a tough crowd to pin down. In most cases, you need them to take action now or they vanish. But here is the strange part, and hear me out here… Perhaps, buyers aren’t taking action because your offer is too available. The 9 Psychological Tricks That Make Visitors Convert. The relationship between marketing and psychology is as old as the fields themselves. Business graduates are required to take Psychology and Consumer Behavior courses so that they can better understand the concepts and processes that determine successful products and sales strategies.

Similarly, visitor psyche also plays a vital role in driving conversion. Identifying the stimuli, both conscious and subconscious, that constitute compelling user experiences which result in conversions is important for both business heads and web designers. Many of the concepts covered in this article can be further explored by reading the book Influence by Dr. Robert Cialdini. A Simple Psychological Trick. Are you happy with your average sales price? 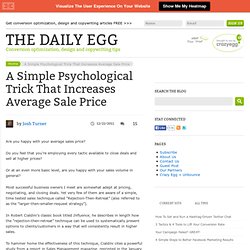 Do you feel that you’re employing every tactic available to close deals and sell at higher prices? Or at an even more basic level, are you happy with your sales volume in general? Most successful business owners I meet are somewhat adept at pricing, negotiating, and closing deals. Yet very few of them are aware of a simple, time tested sales technique called “Rejection-Then-Retreat” (also referred to as the “larger-then-smaller-request strategy”).

In Robert Cialdini’s classic book titled Influence, he describes in length how the “rejection-then-retreat” technique can be used to systematically present options to clients/customers in a way that will consistently result in higher sales. To hammer home the effectiveness of this technique, Cialdini cites a powerful study from a report in Sales Management magazine, reprinted in the January 1975 Consumer Reports: How Non-Retail Businesses Can Put This To Use This is powerful stuff. 5 Psychological Keys That Will Open The Doors To More Sales. How great would it feel if you made one simple tweak to your business, and saw an immediate sales increase? 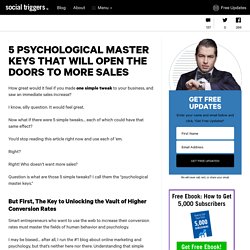 I know, silly question. It would feel great. Psychological Tricks For Writing Sales Letters and Marketing Emails. Copy connectors are another very important part of any sales copy. 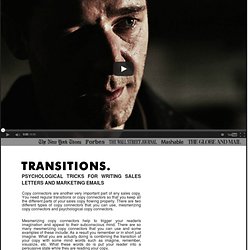 Related:  10 Psychology Tricks You Can Use To Influence People   -  Education   -  Enterprise