Make Your Own Moleskine-Like-Notebook. What we'll make: Your very own Moleskine-like-notebook/journal/sketchbook. 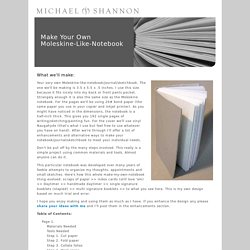 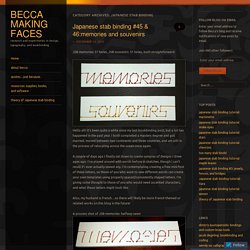 Make sure that your holes along the top line are even! As always, if there is an error or if you have a question, leave a comment and I will do my best to answer. **click on an image to enlarge** hole pattern. Book Tutorial pg 2 by *warrioronlydude on deviantART  Ladder Stitch – Embroidery and Arts Creatives. Ladder Stitch is a kind of embroidery stitch used on plain-and even weave fabrics. 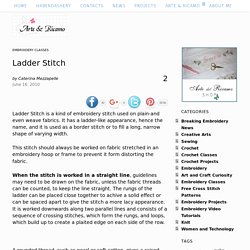 It has a ladder-like appearance, hence the name, and it is used as a border stitch or to fill a long, narrow shape of varying width. This stitch should always be worked on fabric stretched in an embroidery hoop or frame to prevent it form distorting the fabric. When the stitch is worked in a straight line, guidelines may need to be drawn on the fabric, unless the fabric threads can be counted, to keep the line straight. The rungs of the ladder can be placed close together to achive a solid effect or can be spaced apart to give the stitch a more lacy appearance.It is worked downwards along two parallel lines and consists of a sequence of crossing stitches, which form the rungs, and loops, which build up to create a plaited edge on each side of the row. Chain or Coptic Stitch Bookbinding Tutorial. Here’s another method of binding your book with an open spine…a chain stitch or also called coptic stitch binding. 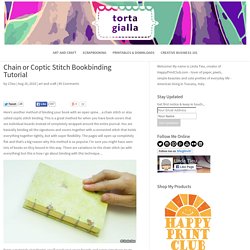 This is a great method for when you have book covers that are individual boards instead of completely wrapped around the entire journal. You are basically binding all the signatures and covers together with a connected stitch that holds everything together tightly, but with super flexibility. The pages will open up completely flat and that’s a big reason why this method is so popular. Tutorial: Faça você mesmo sua encadernação - por Claudine Bartmeyer. English case binding revisited – elbel libro bookbinding. A style of hardback binding less ordinary The concept of case binding, meaning that the cover is made off the text-block and attached to it at a later stage, is known world wide, but the details of construction can vary from one country to another. 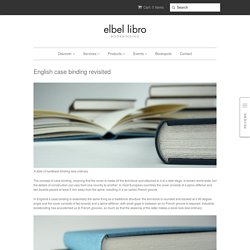 In most European countries the cover consists of a spine stiffener and two boards placed at least 5 mm away from the spine, resulting in a so-called French groove. In England a case binding is essentially the same thing as a traditional structure: the text-block is rounded and backed at a 90 degree angle and the cover consists of two boards and a spine stiffener, with small gaps in between as no French groove is required. 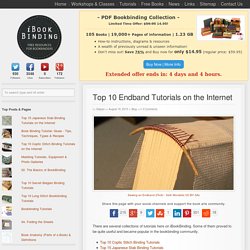 Some of them proved to be quite useful and became popular in the bookbinding community. As you can see, all of them are dedicated to bookbinding process in whole. Today we are discussing something different. Japanese Stab Binding Tortoise Stitch. Tutorial: Faça você mesmo sua encadernação - por Claudine Bartmeyer. BEYOND WORDS: Mandala Journal Tutorial - finally!! I have finally completed my tutorial for the making of my Mandala Journal. 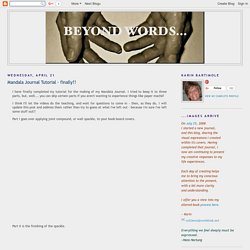 I tried to keep it to three parts, but, well... you can skip certain parts if you aren't wanting to experience things like paper maché! I think I'll let the videos do the teaching, and wait for questions to come in - then, as they do, I will update this post and address them rather than try to guess at what I've left out - because I'm sure I've left some stuff out!! Deconstructed. Lettres, Typographie et Beautiful. Travaux D'aiguille, Lettres et Papier. Petit carnet et petite couture  Origami. Origami, Tartes et Bricolage. Carnets, Journal Maison et Accessoires De Voiture. Bookbinding Tutorial by JamesDarrow on DeviantArt.