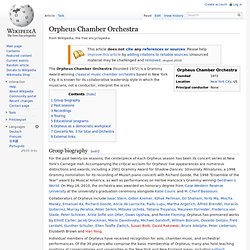 It is known for its collaborative leadership style in which the musicians, not a conductor, interpret the score. Group biography[edit] The Big Idea: The Age of Hyperspecialization. The Idea in Brief As labor becomes more knowledge based and communications technology advances, the division of labor accelerates. 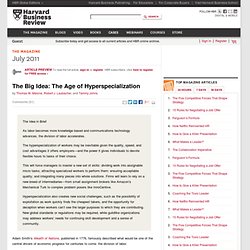 The hyperspecialization of workers may be inevitable given the quality, speed, and cost advantages it offers employers—and the power it gives individuals to devote flexible hours to tasks of their choice. This will force managers to master a new set of skills: dividing work into assignable micro tasks; attracting specialized workers to perform them; ensuring acceptable quality; and integrating many pieces into whole solutions. Overcoming the Global Innovation Trade-Off. For their global innovation strategies, many companies have long relied on their ability to assemble people with key capabilities and critical knowledge. 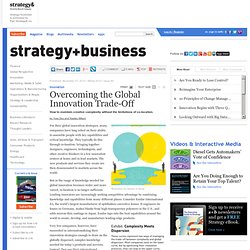 They typically do this through co-location: bringing together designers, engineers, technologists, and other creative thinkers in a few innovation centers at home and in lead markets. The new products and services they create are then disseminated to markets across the world. But as the range of knowledge needed for global innovation becomes wider and more varied, co-location is no longer sufficient. Leading innovators are increasingly seeking competitive advantage by combining knowledge and capabilities from many different places. Learning Spaces Collaboratory. Will offices still exist in the future? I’m currently doing a five-city speaking tour for Canon, speaking about the future of workspace. 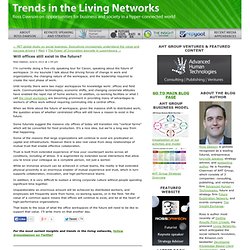 In my keynote I talk about the driving forces of change in work and organizations, the changing nature of the workspace, and the leadership required to create the next phase of work. Until recently there were two major workspaces for knowledge work: offices and field work. Communication technologies, economic shifts, and changing corporate attitudes have enabled the rapid rise of home workers. In addition, co-working facilities or what I call the cloud workplace are becoming prominent in providing many of advantages to workers of office work without requiring commuting into a central office. Is Workplace Hierarchy Becoming Obsolete? Self-Employed Workers Sustain Small Economies. When the economy tanked, both existing jobs and the promise of creating more faded with it. 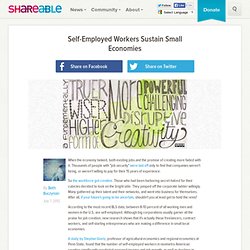 Thousands of people with "job security" were laid off only to find that companies weren't hiring, or weren't willing to pay for their 15 years of experience. So the workforce got creative. Measuring An Employee's Worth? Consider Influence. Today, your performance review is based on things like sales numbers or number of goals met. 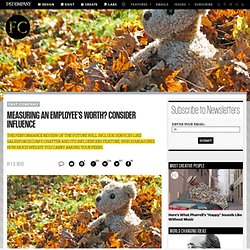 Tomorrow, though, it could be based on something that until now has remained ephemeral: organizational influence. Salesforce.com's Chatter system released a new feature this spring called Influencer. It purports to measure how influential you are within your company, by tabulating, for example, how your fellow workers respond to the items you post to your corporate social network. It's still a work in progress, senior director of Chatter product marketing Dave King tells Fast Company. 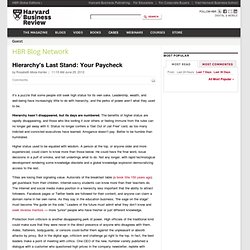 Hacking Home: Coliving Reinvents the Commune for a Networked Age. Coworking: The Independent Consultant’s Social Workplace. Working for yourself as an independent consultant offers many benefits, from choosing your own clients and work hours to deciding your company’s direction and goals. 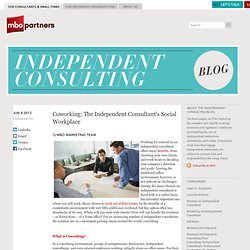 Leaving the traditional office environment, however, is not without its challenges. Among the many choices an independent consultant is faced with is a rather basic, but extremely important one: where you will work. 5 Keys To Building A Business That Doesn't Bury The Humans At Its Core. Loosecubes Secures $7.8M From NEA, Accel To Become The Airbnb For Shared Office Space. Is it time for a C-level social media executive?

Such a role provides the needed visibility to the rest of the C-suite that is required to drive real change. 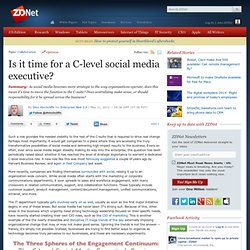 Perhaps most importantly, it would get companies to a place where they are accessing the truly transformative possibilities of social media and delivering high-impact results to the business. Every so often, ever since social media began steadily making its way into the enterprise, the question has been periodically raised about whether it has reached the level of strategic importance to warrant a dedicated C-level executive role.

A new role like this was most famously suggested a couple of years ago by Harvard Business Review, and again in Fast Company last week. More recently, companies are finding themselves surrounded with social, raising it up to an organization-wide concern. The IT department typically gets involved early on as well, usually as soon as the first major initiative begins in one of these areas. The competition for a C-level engagement role. Why Social Business Can Lead to Reinventing the Company Model. How To Move Away from the Industrial Age Company Model. A New Organizational Learning Goal: the Accrual of Awareness. The Dream of the 1890s: Why Old Mutualism Is Making a New Comeback - Sara Horowitz - Business.

Support a Work At Home Person. Naomi Stanford - Dunbar's number. The spring 2010 RSA Journal (UK) has an article by Robin Dunbar, professor of evolutionary anthropology at the University of Oxford. 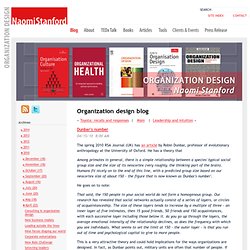 He has a theory that Among primates in general, there is a simple relationship between a species' typical social group size and the size of its neocortex (very roughly, the thinking part of the brain). Why Ditching The Office Could Help You Be More Creative. Researchers have shown that a flexible schedule helps employees be healthier, happier, and more productive. If your boss still isn’t convinced that you should work wherever you want, here’s some more evidence to bolster your case: A study in the Journal of Consumer Research says that working in coffee shops and other moderately noisy places boosts creativity.

The University of British Columbia researchers involved in the study asked over 300 participants to work on creative tasks--thinking of all the possible uses for a brick, imagining how a mattress company could make its product better, playing word association games--in nearly silent, moderately loud (70 decibels, or about what you would expect in a coffee shop), and very loud environments. Jason Fried: Why work doesn't happen at work. How to start a coworking space like…@hubmelbourne. Your Desk Job Makes You Fat, Sick and Dead [INFOGRAPHIC] The productivity of the average worker has skyrocketed thanks to technology, but it comes at the price of a sedentary lifestyle.