Galleries. THIS WILD IDEA. 20 Historic Black and White Photos Colorized. One of the greatest facets of reddit are the thriving subreddits, niche communities of people who share a passion for a specific topic. 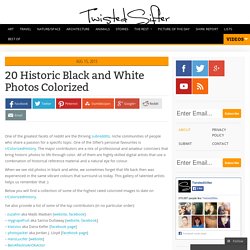 One of the Sifter’s personal favourites is r/ColorizedHistory. The major contributors are a mix of professional and amateur colorizers that bring historic photos to life through color. All of them are highly skilled digital artists that use a combination of historical reference material and a natural eye for colour. When we see old photos in black and white, we sometimes forget that life back then was experienced in the same vibrant colours that surround us today.

This gallery of talented artists helps us remember that :) Below you will find a collection of some of the highest rated colorized images to date on r/ColorizedHistory. I’ve also provide a list of some of the top contributors (in no particular order): 1. 2. 3. 4. 5. 6. 7. 8. 9. 10. Vít Soukup. Jan Hísek. Francis Bacon (malíř) Začal malovat ve 20. letech a větší známost začal získávat ve 40. letech a další velkou vlnu zájmu vzbudil po své smrti. 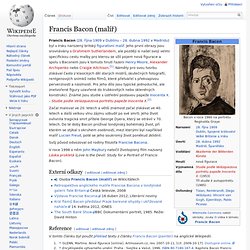 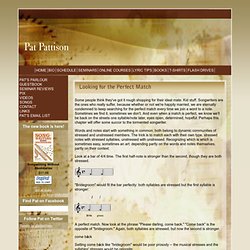 Kid stuff. Songwriters are the ones who really suffer, because whether or not we're happily married, we are eternally condemned to keep searching for the perfect match every time we join a word to a note. Sometimes we find it, sometimes we don't. And even when a match is perfect, we know we'll be back on the streets one syllable/note later, eyes open, determined, hopeful. Perhaps this chapter will offer some succor to the tormented songwriter. Words and notes start with something in common: both belong to dynamic communities of stressed and unstressed members.

Look at a bar of 4/4 time. "Bridegroom" would fit the bar perfectly: both syllables are stressed but the first syllable is stronger: A perfect match. Come báck Setting come báck like "bridegroom" would be poor prosody -- the musical stresses and the syllables' stresses would be opposite. Not that a poor match breaks any mythical rules; it just sounds unnatural. Simon Christen Photography. 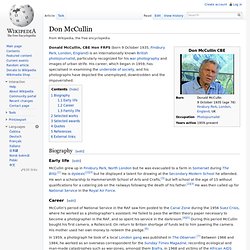 His career, which began in 1959, has specialised in examining the underside of society, and his photographs have depicted the unemployed, downtrodden and the impoverished. Biography[edit] Early life[edit] McCullin grew up in Finsbury Park, North London but he was evacuated to a farm in Somerset during The Blitz.[1] He is dyslexic[2][3] but he displayed a talent for drawing at the Secondary Modern School he attended. He won a scholarship to Hammersmith School of Arts and Crafts,[3] but left school at the age of 15 without qualifications for a catering job on the railways following the death of his father.[2][3] He was then called up for National Service in the Royal Air Force.

Career[edit] In 1968, his Nikon camera stopped a bullet intended for him.[9] Family life[edit] Quotes[edit] 23 Stunning Opera Houses. Romanian Antheneum, Bucharest, Romania Mariinsky Theatre, Saint Petersburg, Russia. Eugène Delacroix. In contrast to the Neoclassical perfectionism of his chief rival Ingres, Delacroix took for his inspiration the art of Rubens and painters of the Venetian Renaissance, with an attendant emphasis on colour and movement rather than clarity of outline and carefully modelled form. 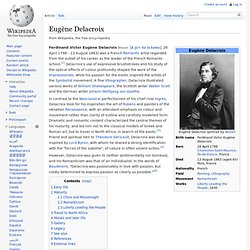 Dramatic and romantic content characterized the central themes of his maturity, and led him not to the classical models of Greek and Roman art, but to travel in North Africa, in search of the exotic.[2] Friend and spiritual heir to Théodore Géricault, Delacroix was also inspired by Lord Byron, with whom he shared a strong identification with the "forces of the sublime", of nature in often violent action.[3] However, Delacroix was given to neither sentimentality nor bombast, and his Romanticism was that of an individualist. In the words of Baudelaire, "Delacroix was passionately in love with passion, but coldly determined to express passion as clearly as possible.